Amateur investors in China are driving a rally in so-called “Sino-Russian trade concept stocks” as they bet that Beijing will boost trade with Russia to soften the blow of sanctions, pushing little-known logistics companies to valuations typically reserved for global tech groups.

More than a dozen Chinese stocks in trade-related industries have posted searing gains since Vladimir Putin launched his invasion of Ukraine, with some rising by the maximum 10 per cent for six straight days.

“The premise is that all of these would be massive gainers as a consequence of increased trade,” said the head of Asia equity strategy at one European bank, describing the rally as a “frenzy” driven by retail investor speculation.

Among the top performers is Jinzhou Port, a port operator in the north-eastern province of Liaoning whose shares have risen 80 per cent since the invasion began, compared to a 3.5 per cent fall for China’s benchmark CSI 300 index.

On Wednesday, Jinzhou Port published the latest in a series of investor warnings to the Shanghai Stock Exchange, reiterating there had been no material developments in its business and reminding investors its profits had fallen almost 10 per cent from a year ago in the third quarter.

It also cautioned its price-to-earnings ratio, a common metric of valuation, was “much higher than the average” for its listed peers.

Nonetheless, the company’s shares again posted the maximum allowable gain of 10 per cent on both Thursday and Friday. That pushed its PE ratio to about 59, blowing past the likes of Netflix (34) and drawing closer to Amazon (63).

The gains for this clutch of stocks come despite Beijing’s reluctance to offer financial and economic relief for Moscow, after sanctions imposed by western countries delivered a punishing blow to Russia’s economy and cut off many of its largest financial institutions from the rest of the world. China has also suggested it is willing to play a role in finding a ceasefire.

But in the months leading up to the invasion, domestic media was suffused with pro-Russia rhetoric, highlighting what Chinese officials have characterised as a “no-limits” partnership.

The two countries pledged to boost bilateral trade to $250bn a year while Putin visited Beijing for the Winter Olympics in February. The Russian president also unveiled new oil and gas deals with China worth almost $120bn.

Traders have also latched on to announcements that suggest official support for Moscow, such as a recent statement from Chinese customs ending restrictions on Russian wheat imports. Financial news sites have pointed to the move as helping drive demand for issuers now popularly referred to as “Sino-Russian trade concept stocks”. 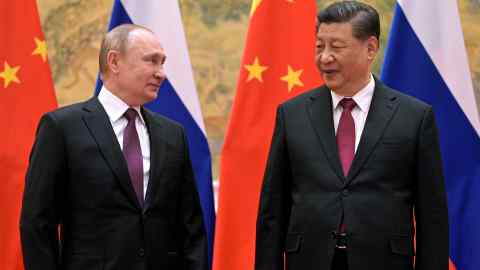 Analysts said a substantial rise in bilateral trade was unlikely to seriously boost returns for most of the companies in focus, including Jinzhou Port.

The Asia equity strategist noted that even if trade with Russia doubled, it would amount to only about 4 per cent of China’s annual total. Even then, he added, “many of these companies are engaged purely in domestic transportation”.

“Such frenzied trades without any strong fundamental support always end in pain,” he said.