At your service: inside the booming business of private dining

Can’t dine at your favourite five-star restaurant? Why not have the chef come cook for you at home?

In the world of catering to the super-rich, you rarely hear the names of clients except off the record. NDAs are often in place. But talking to insiders about the world of private chefs, you do get some colourful stories. Like the one about the wealthy Mexican family who employed three private chefs at the same time: one for their superyacht; one for whichever residence they were heading to (who would arrive days in advance to source smoked salmon or caviar and get fruit to the right stage of ripeness); and one to swap in and out as required. Or how about the ultra-high-net-worth individual who wanted the best of a range of cuisines over a four-week period and rather than ordering in, booked chefs Phil Howard (Elystan Street), Clare Smyth (Core), Theo Randall and Pip Lacey (Murano) and Yuki Sugimoto (formerly SushiSamba) to act as his personal cooks.

During the pandemic, the private-chef market has been evolving. For a start, more people are hiring them (if only for special occasions), and apps and sites like MyTable and We Dine are making booking one as easy as ordering a meal on Deliveroo. At the higher end of the market, there have also been shifts in the way chefs are operating. According to Los Angeles-based hospitality-recruitment agent Brad Metzger, who counts Hollywood producers and actors among his clients, chefs are increasingly being asked to move in with employers to limit their contact with people beyond the family; or to drop off meals outside rather than enter the house, and wipe down containers at cleaning stations at the door.

Some extended families have been quarantining in the same house and hiring a chef for the first time. Different families have also been banding together to create “Covid pods”, with one full-time chef working exclusively between them. Over the summer, when many shifted to second homes or out-of-town rentals, Metzger placed a number of chefs in the Berkshires and the Hamptons. “In New York, there were so many high-end chefs out of work. They were being snapped up,” he says. “We had one guy from Eleven Madison Park who did a bunch of work in the Hamptons, with one family for a month, another for six weeks.”

Kate Emery of Amandine, which places private, chalet and yacht chefs around the world, says chefs are also being asked to quarantine before starting permanent positions and to take Covid-19 tests at the end of the quarantine period, with contracts being extended two weeks to cover that. “Chefs are being paid to sit and wait in isolation, often in hotel rooms,” she says. For short-term placements, locals are preferred. “Previously the whereabouts of the candidate was not an issue, visas depending, as most clients would fly the chef in from wherever they were on a commercial flight or their private jets. But with travel restrictions imposed by Covid-19, international travel isn’t as easy as it used to be,” she explains.

With supply chains disrupted, Emery has also been assisting chefs with ingredients. “One of our chefs cooking in a villa in the south of France couldn’t get hold of some Mexican chillies – cascabel and chipotle,” she says. “Their usual online supplier had suspended international deliveries. We put them in touch with a local provisioning company that had every type imaginable.”

Saima Khan of The Hampstead Kitchen in London, who has cooked for Warren Buffett, Elon Musk and the Obamas, has staged a number of banquets on private jets. Where many restaurants are forced to comply with the rule of six, or table sizes are kept to smaller numbers, there is no cap on numbers of people dining together (within the same bubble) on planes. “A lot of Mediterranean and Middle Eastern families live in a joint family system with grandparents, children and grandkids. That’s often 10 or 12 people,” she tells me. For one Middle Eastern royal client, she threw a birthday celebration for 20 on his jet from London to Doha. “It was called Food Without Borders and the menu featured dishes from some of the countries we flew over.”

As well as wanting to celebrate together, clients are looking for an experience that approximates a restaurant. To accompany their dinners at home, the team at Crown Shy in New York has been curating “beats-driven” playlists (“everything from ’90s hip-hop to breakbeat and R ’n’ B”, says partner and general manager Jeff Katz) like those played in the restaurant. I recently enjoyed the new Petersham at Home service from London’s Petersham Nurseries (available to book post-lockdown). Not only does a chef prepare a three-course meal in your kitchen, there’s also the option of wine pairings, additional waiting staff and table decoration. The menu included veal sweetbread with romanesco; beef sirloin with beetroot and green beans; and fig-leaf panna cotta with rosemary jelly and black figs. It was lovely.

But it was the quintessential Petersham touches that made the night: a bagna cauda with crunchy raw vegetables from Haye Farm that we ate while sipping plum bellinis in the garden surrounded by lanterns; a table dressed in antique white French linen and vintage scavo vases filled with the last dahlias from Petersham garden. We kept the flowers, and their pink and violet blooms brightened the house for days. 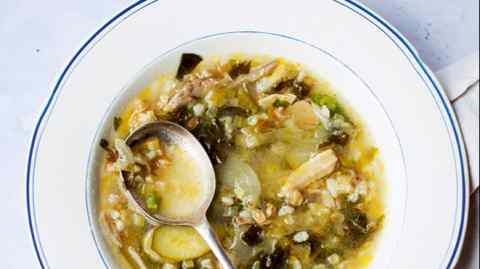