Bank of America, Citigroup and Goldman Sachs took a total $12.8bn of charges in the first quarter for loan losses, and warned there could be more to come, heightening investor fears about the toll coronavirus will take on the financial sector.

The sobering figures from three of the biggest US banks came the day after JPMorgan Chase and Wells Fargo reported a combined $12.3bn of credit charges for the first three months of the year, as they ramped up reserves to deal with corporate and consumer loan problems.

“You have to be planning on an assumption that we’re going to be operating into a recession through 2020 and into 2021,” David Solomon, Goldman’s chief executive, told analysts, as the bank said it would scale back some planned investments to cope with the “terrible pandemic”.

Given the rise in unemployment claims, we do expect consumer losses to increase later this year, and potentially into 2021

Shares in Bank of America were down 6.3 per cent by 1pm in New York, while Wells Fargo was off 5.4 per cent, JPMorgan 5.3 per cent and Citigroup about 4 per cent. Morgan Stanley and Goldman Sachs, which have less exposure to consumer and small business credit risk, were down 3.7 per cent and 0.12 per cent, respectively.

Marty Mosby, analyst at Vining Sparks, said the provisions taken by the banks were only about 15 per cent of the loan losses they were subjected to over a two-year timeframe in Federal Reserve stress tests. But he added: “These are big numbers, people get shocked and thrown off.”

Citigroup and Goldman both reported 46 per cent falls in first-quarter income, while the decline at Bank of America was 45 per cent.

BofA’s results included $4.8bn of credit losses, versus $1bn a year earlier, including $2.3bn at its consumer bank and $2.1bn for investment banking clients. “Given the rise in unemployment claims, we do expect consumer losses to increase later this year, and potentially into 2021,” Paul Donofrio, Bank of America’s chief financial officer, told analysts.

He added that the ultimate loan losses would depend on how well the US government’s support plans worked, and the fate of clients that temporarily suspend their payments — as 16 per cent of BofA’s small business customers have done, along with 5 per cent of mortgage clients and 3 per cent of cards customers.

“The biggest unknown is how long economic activities . . . will be impacted by the virus,” Mr Donofrio said.

At Citigroup, provision charges took a $7bn chunk out of quarterly earnings including $4.9bn for loans likely to go bad in the future, and $2.1bn for charge-offs related to actual losses in the period.

“Even as we have closed out this quarter the variables we look at continue to shift,” said Citi’s chief financial officer, Mark Mason. “I would expect we would see additional [reserve] builds in the second quarter . . . but it is way too early to give a sense of what that number may be.” 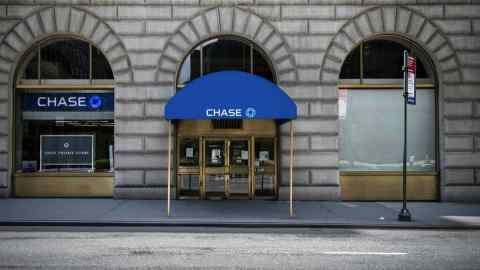 Goldman Sachs took $937m of provisions in the first quarter, mostly related to loans to investment banking clients. The Wall Street powerhouse was also hit with $500m of markdowns to its private equity portfolio and $500m to its public equity holdings, including a $180m hit to the value of its holding in listed healthcare company Avantor.

“Unless people feel safe and secure and confident around the virus, the economic impact will continue in some way shape or form,” said Mr Solomon, who has been advising clients to “hope for the better but plan for the worst”.

The surging loan losses at the banks were cushioned by dramatically higher trading revenues, as the coronavirus triggered a boom in client activity from March, as well as a flood of deposits into the big banks.

Some investors saw positives in the results. Patrick Kaser, a portfolio manager at Brandywine Global Investment, noted that all the big banks had delivered profits despite the large reserve increases.

“If we had four quarters like this then at the end of the year what we would have is growth in reserves, increases in tangible book value, continued dividends and strong capital levels — what a difference from 2008-2009,” he said.