We use cookies (opens in new window) for a number of reasons, such as keeping FT Sites reliable and secure, personalising content and ads, providing social media features and to analyse how our Sites are used.
Manage cookies
Accept & continue
FT Series Collecting: Frieze Week in London
See all 8 stories
Collecting

For ‘Possessions’, the curator has chosen nine artists whose work explores the big questions

From ancient times, human beings have made symbolic objects in an effort to evoke, celebrate, honour and placate the powers which they believed kept their world turning. Today such faith systems are often dismissed as antithetical to scientific knowledge. Yet artists continue to draw on mysticism, ritual and sacred objects in order to gesture at possibilities — in love, work, politics, society — that transcend our present-day existence.

Given the urgent need for such innovative approaches, it’s astute of curator Zoé Whitley to choose spiritual territory for a curated section of Frieze Viewing Room which she has titled Possessions: Spirituality and the Art of our Time.

Speaking to me via video call, the director of east London’s Chisenhale Gallery observes that as someone “who’s always worked in the non-profit-making sector”, she inevitably found herself considering what it meant to be working in the “specific context of the art fair itself”.

Whitley had no doubt that she could negotiate the divide. “I’m in the world. Artists are in the world . . . My role is to get artists’ work out into the world, and excite people about it [while] being respectful [and] finding artists people won’t be familiar with,” she says, by way of explaining how she approached her new commercial terrain.

The paradox between creativity and commodity led her to think about the “double meaning of possession both as ownership, as something that could be claimed or owned, and the other meaning of something that has a hold on you, perhaps an idea or spirit”.

Whitley was further inspired by Noah Davis, a hugely talented American artist and curator who died tragically young at 32 after founding the Underground Museum in Los Angeles and creating a body of canvases that hum with a deep, numinous appreciation of human life.

Davis, says Whitley, once observed that “painting, like spirituality, makes people very uncomfortable”. He also believed that spirituality was “a driving force behind painting” and as a consequence made the medium “different from any other art form”.

The notion that painting has unique spiritual properties is not new. Early icons, for example, were believed to have miraculous powers. While fighting in Constantinople, the Venetians made a huge effort to wrest the Nicopeia, an icon of the Madonna, from the Byzantine army because the image was said to offer protection to whoever “owned” it. It now resides in St Mark’s Cathedral.

Whitley’s considerations led her to contemporary painters such as Mike Cloud, who will show at Possessions with the Thomas Erben gallery. Creating sculptural paintings that fuse frame and support, Cloud’s practice prompts an “awareness of where the painting begins and where the wall ends”, Whitley says. “He speaks about wall space as sacred space where windows, doors and other kinds of portals exist.”

Such thinking chimes with the paintings of Mark Rothko, whose shimmering pyramids of colour were efforts to evoke gateways into an unknown, infinite space that lies beyond mortal existence. But Cloud, whose paintings begin with the shape of a Star of David, employs more specific inspiration. Often he finds his subjects via online searches for recent deaths. Although he includes Bollywood actors, jihadis and Trump supporters among his ghostly cast, working primarily in abstraction he avoids fetishising individual people. Rather, his paintings become explosive, turbulent memorials that transcend the passing of an individual to act as universal symbols of grief. (He has described them as expressions of “collective consciousness and mourning”.)

A gift for weaving both political and spiritual strands into the fabric of their practices unites several of Whitley’s choices. Born in Johannesburg and now based between Amsterdam and Cape Town, Buhlebezwe Siwani, for example, is an initiated sangoma, as traditional healers who use divination are known in South Africa.

With Lisbon’s Madregoa gallery, Siwani is showing Inkanyamba, a series of paintings made from South African green soap and gold pigment on handwoven fabrics. The green soap, often used by people in poor communities, evokes the act of cleaning colonial wounds as well as the cleansing of such abuses from mainstream history. But it also refers, as Siwani has put it, to “the thought that black bodies are always dirty” and that as a black woman, she is “asked to cleanse herself endlessly in multiple ways because one is always thought of as a lesser or rather dirtier human being”.

Certain practitioners straddle the divide between mysticism and science. Showing with Delhi-based gallery Natura Morte, Jitish Kallat, for example, is offering Covering Letter, an immersive installation that has adapted sounds from the two phonographic Golden Records that were sent into space in an effort to convey the nature of life on Earth to extraterrestrial life by Nasa in 1977.

Writing from Mumbai, Kallat, who has described the piece as a “meditation on ourselves as joint residents of a single planet”, says: “Occasionally adjusting the focal length and distance at which we view the world, in time or in space, alters the manner in which we interpret the now and immediate . . . This is a message from our recent past but is most likely going to outlast us as a species and possibly even outlast our planet and solar system. I’m interested in how such a question shifts our sense of the present moment.”

Right now, of course, the question of our planet’s future is at the forefront of all our minds as we confront the twin menaces of Covid-19 and climate change. Whitley is hoping that the works in Possessions will aid our contemplations. “These nine different perspectives on spirituality, that are so diametrically opposed, can come together to create something complimentary that helps us ask a big set of questions that we don’t ask ourselves enough . . . such as ‘What do we hold dear?’ and ‘What are we willing to sacrifice?’”

‘Possessions: Spirituality and the Art of our Time’, October 9-16, frieze.com 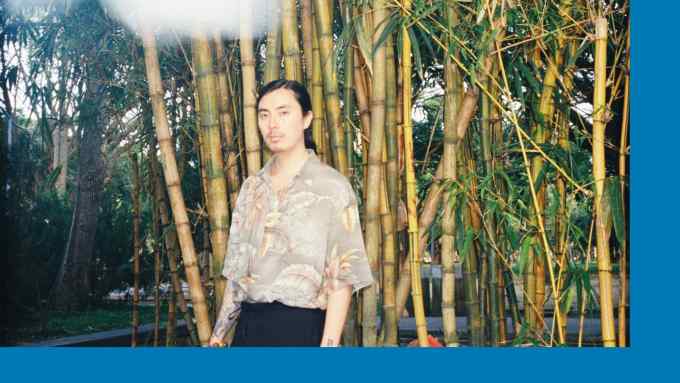