India and Pakistan engage in a high-stakes game of brinkmanship

Narendra Modi is under pressure to act over terror groups in Pakistan but may need to engage with his counterpart, Imran Khan

When Pakistan-based militant group Lashkar-e-Taiba staged a sophisticated terror attack in 2008 in Mumbai — striking the main train station and two luxury hotels — Narendra Modi, then chief minister of Gujarat, raced to the Oberoi Hotel, where Indian security forces were battling the militants.

Although Indians were clamouring for a military strike on Pakistan to avenge the assault, which claimed 166 lives, the then prime minister Manmohan Singh exercised extreme restraint and eschewed talk of retribution. Standing outside the Oberoi, Mr Modi lashed out at Pakistan and criticised Mr Singh, calling his response to the grave provocation “disappointing”.

In the years since, Mr Modi, now India’s prime minister, has repeatedly mocked the previous government’s response to the Mumbai carnage and said his predecessor lacked the “courage” to conduct surgical air strikes against Pakistan, as some Indian security hawks had then advocated.

This week, as he gears up for an unexpectedly competitive election just months away, Mr Modi proved that his tough talk on terrorism was not mere political bluster. On Tuesday, 12 days after 40 Indian paramilitaries were killed by a Jaish-e-Mohammad suicide bomber in Kashmir, Mr Modi authorised an airborne missile strike on Pakistani territory — the first Indian use of air power against its neighbour since the two countries went to war in 1971.

The message, says one Indian official, was clear: India, with its growing affluence and superpower aspirations, would no longer remain idle if attacked by terrorists harboured by Islamabad. “February 26,” the official says, “marked the end of strategic restraint when it comes to counter-terrorism.”

Yet India’s new military assertiveness has not delivered a clear strategic advantage for New Delhi — nor given Mr Modi the unambiguous political boost he had been hoping for. A day after India’s strike, Pakistan retaliated, sending planes to attack military installations in India. In the ensuing aerial skirmishes, an Indian MiG-21 was shot down. The pilot, commander Abhinandan Varthaman, was captured by Pakistani soldiers and later paraded on television, bloodied and blindfolded.

The risk that hostilities could rapidly spiral out of control eased slightly after Imran Khan, Pakistan’s cricket-star-turned-prime-minister, announced on Thursday he was returning the pilot to India in a “goodwill gesture”. commander Varthaman was handed over to India on Friday. Mr Khan — elected with military support just last year and still wrestling with a severe economic crisis — has also implored New Delhi to engage in dialogue and avoid “miscalculation” that could lead to greater conflict.

Tensions still remain high, however, with Mr Modi touting his new aggressiveness on the campaign trail. “This is a new India,” he declared at a large political rally on Friday. “This is an India that will return the damage done by terrorists — with interest.”

And even if this particular episode passes, political analysts are trying to assess how the bitter and volatile relationship between two nuclear-armed neighbours may evolve after their worst outbreak of hostilities in decades.

“India was very eager to convey to Pakistan that it was willing to strike at Pakistani territory in retaliation for terrorist acts against India, and that is very different from the past,” says Ashley Tellis, at the Carnegie Endowment for International Peace. “The difficult question is, does this fundamentally change the character of Pakistani terrorism to India?” he asks. “If it does, it’s all to the good. If it doesn’t, things look a little more dicey. This is a new threshold that India has set and in the future, things could be even more violent.”

Srinath Raghavan, a former Indian army officer who now teaches international relations at Ashoka University in Haryana, says it remains unclear whether even the current round of hostilities is definitively over. “All the Modi supporters feel that India should still land one more punch before calling this off,” he says. “Even if we manage to get out of this crisis, expectations are being set in ways that will make future management of this relationship difficult if terrorism continues.”

Enmity between New Delhi and Islamabad dates backs to 1947, when the departing British colonial rulers partitioned the subcontinent into Hindu-majority India and Muslim-majority Pakistan. Since then, the two have fought three times over the Muslim-majority Kashmir region, which both claim as their own. In 1971, India used its military to help Pakistan’s rebellious eastern wing break away to become independent Bangladesh, a source of deep resentment in Pakistan.

But since the 1990s, Pakistan’s military establishment, particularly its Inter-Services Intelligence agency, has relied on unorthodox tactics to bleed its bigger neighbour: using committed Islamist militants to conduct suicidal terror attacks, both in restive Kashmir, and major Indian cities.

The leading actors in this asymmetric warfare have been Lashkar-e-Taiba (Army of the Righteous) and Jaish-e-Mohammad (Army of Mohammad), both led by veterans of the US and Pakistan-backed mujahideen war against Soviet forces in Afghanistan in the 1980s, and both close to the ISI.

For two decades, the LeT and JeM — which openly recruit and train jihadis in Pakistan despite their UN designation as proscribed terror groups — have carried out numerous attacks in India, including a 2001 assault on India’s parliament and the 2008 Mumbai attacks.

These violent onslaughts have been coupled, since the two countries’ 1998 tit-for-tat nuclear tests, with Pakistan’s ambiguity about its willingness to use those weapons in a conflict, a threat that left India wary of military action.

Mr Modi has positioned himself as a strong, decisive leader willing to launch a robust response to Pakistani provocation. It’s also personal: early in his tenure, he expended personal capital to improve ties with then Pakistani prime minister Nawaz Sharif, only to see his outreach undercut by militant attacks on two Indian military bases in 2016.

Days after the second of those assaults, a small team of Indian ground forces were dispatched into Pakistani-held territory for a “surgical strike” to destroy shelters used by militants waiting to sneak into Indian Kashmir. That action has since become the subject of relentless political propaganda from New Delhi, as well as a slick Bollywood action thriller that Mr Modi’s ruling Bharatiya Janata party urged Indian voters to see ahead of the elections.

In this climate, Mr Modi was compelled to hit back after a Kashmiri suicide bomber affiliated with JeM obliterated a military bus on February 14, the deadliest attack on Indian forces in Kashmir in decades. “The way we have portrayed the surgical strike implied there would be much bigger things if there are bigger attacks,” says Mr Raghavan. “This government has created that mood among the people.”

Precisely what India hit during its missile strike on Tuesday remains a matter of fierce dispute. New Delhi says it carried out a “pre-emptive strike” on a JeM training camp in the town of Balakot, acting on “credible intelligence” of jihadis planning attacks in India.

Pakistan claims the missiles fell harmlessly on to a hillside and caused little damage, a claim seemingly supported by eyewitness accounts from the region and independent analysts who have examined satellite imagery. But the Indian military has been adamant that its “strategic objectives” were met.

Analysts suggest that regardless of what was, or what was not, hit in the attack it is India’s use of air power and the demonstration of its willingness to strike Pakistan’s territory that is more significant. Both are escalatory red lines that New Delhi was previously thought unlikely to cross.

“This was a change from the normal patterns of security competition, with deliberate pre-mediation to signal to Pakistan that India is willing to take the risks of escalation if necessary, and that attacks in India will not be cost-free,” says Mr Tellis.

But Pakistan has also displayed its own willingness to take risks, even through conventional military engagement, where it was considered to be at a disadvantage. “If you are a big power out to teach a lesson to an upstart, and it’s a draw — especially a messy draw of this kind, then the upstart has won,” says Ajai Shukla, a retired Indian army colonel. “We’ve actually achieved the near impossible feat of making Pakistan look statesmanlike. Imran Khan comes out smelling of roses.” 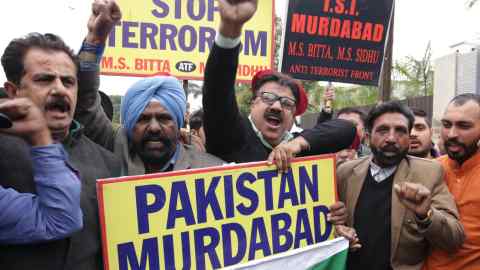 Ahmed Rashid, author of several books on Pakistan and South Asia, says he believes Mr Khan is genuinely keen to improve relations with India and is “sympathetic” to the need to crack down on extremists. “These small groups of extremists almost led us to war,” he says. “Obviously they are out of control and it’s an issue that Pakistan can’t ignore any longer.”

But he says Mr Modi’s “unflinchingly hard line” and refusal to engage with Mr Khan will make progress difficult. “There is now room for a change of policy here, but it has to be reciprocated, and I don’t see that,” says Mr Rashid.

Indians and many observers are sceptical of the chances of a genuine crackdown. “I do think the Pakistanis will be more careful about where their terrorism infrastructure is located to make sure it's not within striking distance,” says Mr Raghavan. “But to get Pakistan to totally change its game will be a long-term play.”

Still, Vipin Narang at Massachusetts Institute of Technology says India has created “uncertainty and ambiguity” about whether “all of Pakistan” is a target after future attacks. “If you’re Pakistan and you don’t know how India is going to act after the next provocation, you may rein in your provocateurs.”