Mathias Döpfner, chief executive of German media group Axel Springer, has ruled out helping Facebook check facts and filter news articles, saying it is not the media’s job to crack down on fake news.

Speaking as the company unveiled full-year results, Mr Döpfner said it would be a “fundamental mistake for publishers or public broadcasters to help social media solve their credibility problem” by checking the veracity of content on platforms such as Facebook.

His comments came a month after Facebook announced it was joining forces with French media companies including Le Monde, Libération and Agence France-Presse on a fact-checking initiative ahead of this year’s French presidential elections.

Facebook will ask users to report any dubious news article they see by flagging it using a drop-down menu. When two fact-checking organisations ascertain that it is misinformation, Facebook will identify it as contested and display a warning.

Governments in Europe are keen to avoid the excesses of the US presidential election last year, which was marred by internet disinformation and hoaxes — such as the news that Pope Francis had endorsed Donald Trump. Germany and France, which both face critical elections this year, are particularly worried about the impact that fake news could have on voter behaviour. But there is no consensus on how to deal with the issue. Facebook’s French initiative is controversial, with some saying that journalists will essentially be working for the social network for free.

Attempts by Facebook to replicate the French experiment in Germany have so far failed, with most big media companies refusing to get involved.

“It would be like BMW saying my job is to repair Teslas,” said one senior German media executive.

The only organisation to have confirmed it will work with Facebook in Germany is Correctiv, a small not-for-profit investigative journalism outfit with about 20 employees.

Mr Döpfner also took aim at media reports that the German government was considering setting up a special unit to fight disinformation on the internet.

“It’s completely ludicrous to think that it’s the task of government, through a kind of ‘truth ministry’, to decide what information is true and what isn’t,” Mr Döpfner said. “No one has the right to define what is the truth, least of all the government.” 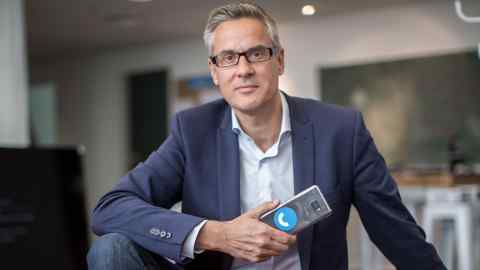 The German interior ministry said it had no plans for a special unit to combat fake news, though it would “intensively monitor the election campaign and the discussions around it”. It said it was also looking to “develop technical instruments to recognise social bots” — software programmes that mimic human behaviour on social media.

Axel Springer, which publishes Bild, Europe’s top-selling newspaper, and the German broadsheet Die Welt, said it was making progress in its efforts to transform itself into a digital publisher: 72 per cent of its operational profit came from its digital businesses last year, and 67 per cent of revenues.

Revenues for the year were flat at €3.3bn, while earnings before interest, tax, depreciation and amortisation rose 6.5 per cent to €595.5m, slightly higher than analysts’ expectations. The company said it was raising its dividend by 10 cents to €1.90 a share.

Axel Springer’s shares were up almost 3 per cent at €51.13 in afternoon trading.