A new scheme is poised to help the watch and jewellery industry meet the UN’s Sustainable Development Goals — and aim for net zero carbon emissions.

Cartier and Kering, the French luxury groups, have set up the Watch & Jewellery Initiative 2030. Formalised in April, it lays out objectives for environmental protection and resource and community management.

It also covers diversity and inclusion in supply chains.

“When it comes to ESG [environmental, social and governance], and the UN SDGs, we can see that, in watches and jewellery, everyone feels responsible but in a fragmented way,” Cyrille Vigneron, Cartier’s chief executive, says. “These principles imply co-operation and coalition. If we want to be serious, we have to make a platform where the key actors can join and participate.”

The initiative has 10 member brands so far, including Chanel, Montblanc and Swarovski, and that number is expected to double by the end of the year. Vigneron says annual progress reports will be independently audited.

According to its founders, the initiative is open to brands from across all groups and price segments — as long as they satisfy membership criteria.

The collaboration will have several benefits, she says: “[Watch and jewellery brands] have many suppliers in common. A collective approach will reduce emissions, protect nature and biodiversity, and be good for the workers.”

Daveu and Vigneron acknowledge that the initiative has the potential to deliver cost savings, too.

Not for the first time, it seems the industry is following in fashion’s wake. The Fashion Pact, started in 2019 and led by chief executives, invited brands to commit to science-based targets and to meet the goals of the 2015 Paris Agreement. Today, it has more than 250 signatories, including Kering, Chanel, Nike and H&M Group.

Daveu and Vigneron say they are keen to follow the pact’s example.

To date, sustainability programmes in the watch and jewellery industry have concentrated attention on reducing direct impact — emissions caused by brand activities, such as manufacturing — and on marketable programmes, such as using recycled materials to make watches and jewellery, or sponsoring environmental projects.

Now, Vigneron and Daveu say the Watch & Jewellery Initiative 2030 will tackle the value chain from end to end. “Ninety-nine per cent of [Cartier’s] carbon footprint is linked to our supply chain,” says Vigneron.

He adds that Cartier achieved net zero on its direct emissions in a year, by implementing schemes including a switch to renewable energy.

“Our goal is to achieve net zero on the entire supply chain by 2030,” he says.

Industry analysts, however, question the effectiveness of such agreements. “Is this just another initiative that people will soon have forgotten about?” asks Oliver Müller, founder of LuxeConsult, the Swiss consultancy. “Or is it a change of industry mindset? If they can convince even half the watch and jewellery industry to participate and communicate, it will be a huge success and positive image changer.”

First, the initiative will have to overcome suspicions of ‘social washing’ and ‘greenwashing’ — the terms used when brands inflate their credentials or use marketing tactics to cover bad practice.

But Daveu believes it will be increasingly hard for brands to dodge responsibility: “If you’re not telling the truth, [then] thanks to social media and NGOs, consumers will see it as social washing or greenwashing.” She adds that “luxury brands that say something they don’t [later] apply take a big risk”.

“You need others to disclose that what you say is true,” says Diana Verde Nieto, co-founder of Positive Luxury, which works with companies to build sustainability best practices. Its Butterfly Mark is independently audited by BSI, the UK standards body.

“These initiatives are good but luxury needs to be regulated like other industries, such as food,” suggests Verde Nieto. “And sustainability should be operationalised, and meeting commitments should be directly accountable to a chief executive. That’s how we will make progress.”

Studies have repeatedly shown that environmental impact is more of a concern for luxury buyers. But wider consumer patience is wearing thin, according to Astrid Wendlandt, founder of the media outlet Miss Tweed. “Consumers are tired of being told that luxury brands are doing all they can,” she says. “They want tangible, measurable and verifiable results.”

Wendlandt wonders whether the initiative will gain more members, though. “The big brands have had trouble working together and it will be interesting to see if they can find consensus,” she says.

Relations will not have been helped by recent divisions in the Responsible Jewellery Council (RJC), which Cartier co-founded in 2005 to promote responsible sourcing of precious stones and materials.

The RJC had become a leading voice on industry ethics, but it was rocked this year when several of its most powerful members, including Cartier and Kering, resigned after it declined to remove its vice chair, the Russian state-backed company and world’s largest diamond mining company, Alrosa, following Russia’s invasion of Ukraine.

Cartier and Kering also stepped away from the RJC’s board. “The organisation was not aligned with our moral values,” says Daveu.

The RJC voted to accept Alrosa’s decision to suspend its membership on April 1, the same day the Watch & Jewellery Initiative 2030 was officially ratified. Cartier and Kering have since rejoined as members, but not returned to their board positions.

Their Watch & Jewellery Initiative was originally launched in October last year, and is based in Geneva, as opposed to London where the RJC is headquartered. Daveu says it is registered as an NGO. “To fight climate change and to implement biodiversity, honestly, it’s a separate work.” Daveu and Vigneron both say that, dependent on the RJC’s future direction, they would like to work in “strong partnership” with it.

They also say they are optimistic that their initiative’s goals can be met and that reducing greenhouse gas emissions is simpler than some brands assume. “It’s not as difficult for watches and jewellery as we thought at first,” says Vigneron. “We use a few tonnes of metal and, if you recycle them, use clean energy in your factories, then you’re done. But we have to do it systematically and collectively.” He says carbon emissions linked to recycling gold and platinum are 25 times lower than those created mining raw material.

Daveu agrees. “If I didn’t think we could do it, we wouldn’t say it,” she argues. “Luxury sets the trend, but none of us is big enough to change the paradigm alone.” 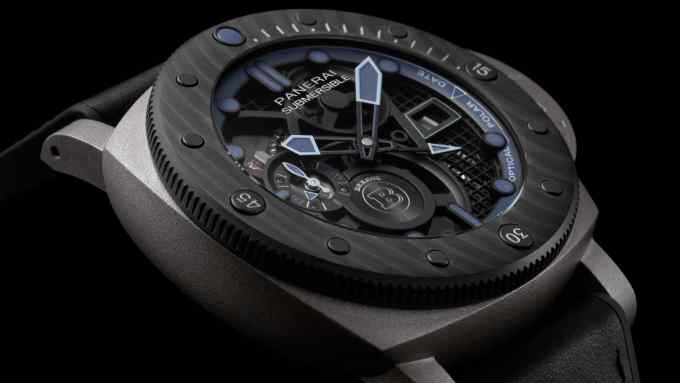