From coats to cocktail wear, the designer has a flair for merchandising

In 2018, as was reported by the FT, LVMH’s chairman and chief executive Bernard Arnault said that he was hoping Hedi Slimane’s appointment as the creative lead at Celine would amount to “at least two to three billion euros [annually], and perhaps more, within five years.”

If that goal is to be achieved, it will be through micro-advancements and — to many — what appears to be a lot of the same.

But signs are so far pointing to success. Since revealing his first womenswear collection for the house exactly one year ago, the designer’s luxurious plainclothes have settled into a groove, literally and figuratively. Most notably, he has switched up the label’s accessories matrix with a more heritage-focused and timeless offering (complete with Celine’s mid-century monogram and horse-bit accenting circa the 1970s).

In his first women’s collection, Slimane put his foot down with a pointed distancing from his predecessor Phoebe Philo’s artsy, roomy and high-concept ideas. His discipline orbits around lots of leather, lots of short party dresses, lots of slim jackets, and lots of skinny androgyny.

At Slimane’s prior role as the head of Saint Laurent, he showed all of this relentlessly. They are his signatures. Season one resulted in a quiet uproar among industry critics; how could Philo’s Celine, beloved by many, be so quickly discarded?

Slimane went somewhere new for the house, albeit familiar for him. It was not a huge surprise. His second line-up took on a more country-retreat bourgeois vibe, in line with the Celine of the aforementioned decade. With it, the shock-factor was alleviated, and the result became more palatable.

His third effort, shown on Friday night in Paris, shrewdly landed somewhere in between. Again, a lot of what he does initially appears interchangeable. Though up close, baby-step progressions emerge. There was night-time glamour with a sharply-cut slinkiness (see: excellent rangy black trousers paired with a slightly elongated black blazer), yet there was also a more free spirit and throwback bohemianism apparent, with jean jackets over tied-at-the-neck frocks or frilled blouses styled with wicker-and-leather bucket bags. Loads of high-waisted washed denim jeans — with a kind of leggy and relaxed shape — appeared on the catwalk. A doily-collar shirt worn under a faux-university sweatshirt, emblazoned with “Celine Paris,” looked like something straight out of 1976. And there was a more of-the-moment hooded glen plaid cape. Heavily embellished pieces anchored the line up, with dresses that looked worth their weight in glitz.

Slimane does not swerve to trends, nor does he bow to the demands of critics (and he is, no doubt, a polarising guy). This astuteness helps to sell his vision, but his major skeleton key is that he is really good at merchandising. It is expensive merchandise, but in Spring/Summer 2020 alone, an entire closet could be filled (for all seasons, despite this being a warmer-weather collection). Big fuzzy coat to boyish blazer; breezy day-dress to red-carpet knockout — Celine is becoming a one-stop-shop all over again. And even though Slimane himself is clued into the times (he is an avid music fan, especially), the clothes he makes are, for the majority, ageless. 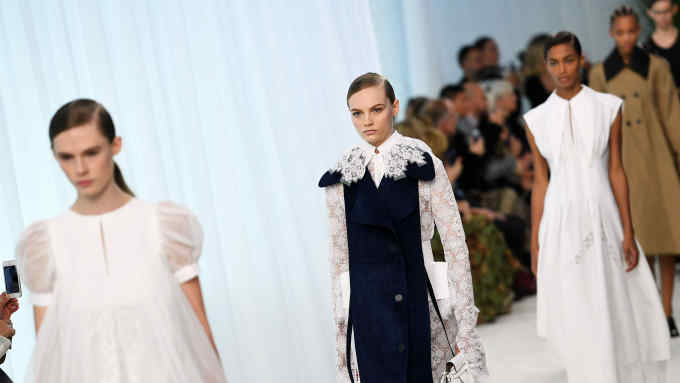