Travel to the moon with Laurie Anderson’s VR artwork

As far as art is concerned, the jury is still out on virtual reality. Is it a new art form, or simply another tool in the artist’s bulging workbox? Is the work produced “art” at all, or just a video game without the game?

These are the sorts of questions often asked. But not by Laurie Anderson, an artist who has always defied categorisation, and at 71 is still pushing quietly but forcefully at the walls of the avant-garde. For her and her Taiwanese collaborator, new media artist Hsin-Chien Huang, VR allows for a glorious synthesis of multiple artistic forms and mind-expanding explorations: movement, music, political and social criticism, film, fantastical narrative, immersive engagement, sheer wonder. And — perhaps most importantly — the chance for participants to power up their own imaginative world.

Their latest work is “To The Moon”, a 20-minute immersive extravaganza, perhaps their most ambitious in 20 years of collaboration. It’s their third joint VR project — the second, “La Camera Insabbiata”, won the Venice Film Festival’s VR prize in 2017 — and it was created last year for Denmark’s Louisiana Museum of Modern Art, for a show celebrating Earth’s satellite 50 years after that historic landing. It now comes to Asia for the first time at the Art Basel Hong Kong fair, courtesy of HTC Vive Arts, whose mission is the application of technology to the arts.

“As a child, I thought I came from the sky,” Anderson has said, and fans will recognise in “To The Moon” strands of thought from her 1989 album Strange Angels. A devoted proponent of this new medium, she says: “Artists since the beginning of time have wanted you to get lost in their world. VR offers you that in a way that is unique.”

Getting lost is certainly what happens. The hateful headset is instantly forgotten as, with gut-lurching suddenness, the “floor” shatters beneath you and you are cast off, a weightless space traveller in the wonder of the galaxy. And quickly dumped on the surface of the Moon, quaking (in my case), to face and explore a series of visions and adventures: ghost dinosaurs composed of mathematical symbols splinter into nothing as you navigate yourself towards them (one is replaced by a phantom Cadillac); a glittering diamond-shaped mountain sucks you in high among its giant peaks, perilously close; a plethora of swirling, hideous space junk crashes into your visor before you realise you have grown an immensely long pair of arms with which, presumably, to fend off the aggressions of this man-made trash, while behind looms the immense, terrifyingly beautiful sight of Earthrise. A fathomlessly deep stone rose (remember Saint-Exupéry’s The Little Prince?), still and lovely, is vast enough to be slowly circled by its own eerie moons. Later you lose your body completely; suddenly you’re on a donkey ride; an entire galaxy explodes into a vast cosmic firework display.

There are almost endless references here. The dinosaur-turned-Cadillac is a surprisingly coarse touch, as is the word “democracy” splintering into distant nothingness among the stars, and somehow I knew we wouldn’t get to the end without the apparition of a phantom Stars and Stripes. Yes, it is of course about territory, and political manoeuvring, as well as ecology and wider scientific inquiry. But also literature, childhood storytelling, myths, music. Time, and timelessness. The limits of our knowledge, and of our senses. Of beauty. Of fear. Of our identity itself.

For Anderson, an engagement with space goes back to 2002, when she became the first — and, to date, only — artist-in-residence at Nasa. There she could inspect facilities such as the Hubble Space Telescope and talk in-depth to astronauts and nanotechnologists: two years later she began a solo tour with a poetic work called “The End of the Moon”, and has pursued each new avenue of technological development in her work since then. Hsin-Chien Huang, who, according to Anderson “does ALL of the work” in their partnership, says that he aims “to get the newest media, and see what the art can do with it”.

In this case, it has of course created a Moon of the imagination, rather than a celebration of the real thing. Fifty years ago, in real life, men fulfilled the dream of ages by walking on the actual lunar surface. They got the rock samples and never bothered to go back. Leaving, you might say, the “Moon” safe for dreamers.

Both artists have talked about the ways in which VR creates a war of the perceptions, a sensual overload that means we have to decide which one to go with, at any given moment. That certainly happened to me with “To the Moon”: I can barely remember the music. I was too overwhelmed, terrified. My hands were dripping when I pulled off that headset, and my legs felt weak for half an hour afterwards. It’s scary out there in space. But then, I am a nervous flyer. 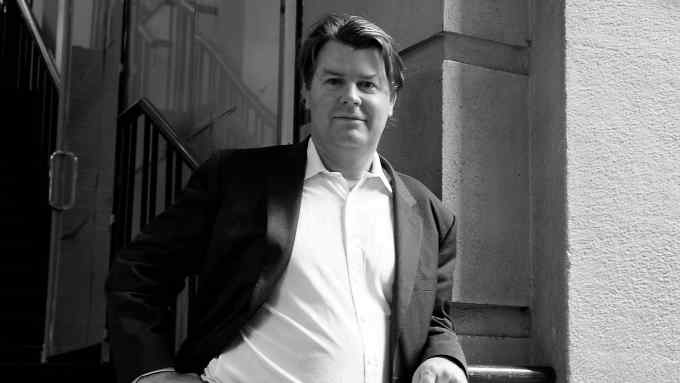