Italy’s Five Star Movement has voted heavily in favour of a coalition with a centre-left rival, putting the country on track for a new government and closing the door on Matteo Salvini’s bid to win power through a snap election.

Activists from the anti-establishment party approved the tie-up with the Democratic party in an online vote held on Five Star’s “direct democracy” web platform on Tuesday, with 79 per cent voting in favour.

Giuseppe Conte, prime minister, is expected to meet Italian president Sergio Mattarella in Rome on Wednesday to ask to form a government with the two parties.

A new Five Star-PD government is expected to attempt a more constructive dialogue with Brussels following repeated clashes between Mr Salvini and the European Union over immigration and public spending.

The pact between the two parties follows the collapse last month of Five Star’s coalition with the anti-immigration League, whose leader Matteo Salvini called for a vote of no confidence in Mr Conte.

Luigi Di Maio, Five Star’s leader, said: “In less than a month we can say that an unprecedented crisis of government has been resolved.”

Mr Salvini, who has repeatedly called for new elections in which opinion polls suggest that the League would emerge as Italy’s largest party, on Tuesday called the tie-up between Five Star and PD “shameless”. Mr Salvini was emboldened to bring down the coalition after the League won the most votes in European parliamentary elections earlier this year.

Matteo Renzi, ex-prime minister for PD who had been a fierce critic of Five Star until reversing his position after Mr Salvini’s failed gamble, said that if the new government did not go ahead it would result in economic chaos and “a bloodbath not only for Italy, but also for the Five Star”.

A joint draft political programme published on Tuesday made up of 26 brief points said the new government would pursue an “expansive” budget but “without compromising public finances”, and would avoid possible mandatory tax increases next year.

It also called for the EU to change its budget rules to be “geared towards growth, not only to stability”. Other points included a new minimum wage, greater spending on protecting the environment, and more spending in Italy’s poorer south.

From 9am local time on Tuesday, about 115,000 registered online Five Star activists were allowed to answer “yes” or “no” to Five Star’s forming a new government, allied with PD and led by Giuseppe Conte. 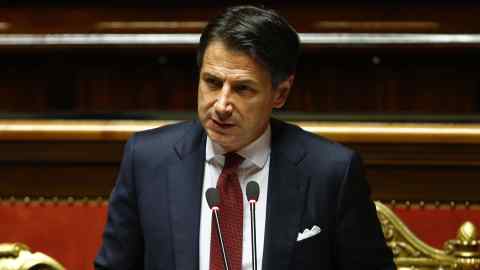 Five Star sees polling members online on important decisions as an exercise in “direct democracy” that connects its elected officials and leadership to the party base.

Political opponents have criticised the use of the platform, called Rousseau, which is owned and administered by a private company run by Davide Casaleggio, son of Five Star’s late founder.

Enrica Sabatini, who works on Rousseau, told Italian media that the site was secure after efforts had been made to improve its defences against hacking attacks. She said that 73,000 activists had voted by late afternoon on Tuesday.

Mr Di Maio, who holds the position of “political leader” of Five Star but has shared decision-making with other senior figures such as Mr Casaleggio, is expected to lose his position as deputy prime minister in a new coalition with PD.

Mr Di Maio said this was not a problem as long as PD was also not given a deputy prime minister role, but the 32-year-old is yet to give vocal support to the agreement with PD — a party he has spent years attacking as a symbol of a self-serving Italian political system.

On Tuesday, Mr Di Maio said he had voted in the poll, but did not reveal which way, saying that the decision was private.

Get alerts on Italian politics when a new story is published