Why the Tiger Moth is still soaring

Collectors love the light aircraft with a winning mix of pluck, simplicity and romance

“She’s forgiving, so probably won’t kill you, but she’ll point out all your mistakes while laughing at you,” says Texas-based flight instructor Brian Lloyd. “It’s easy to fly a Tiger Moth, but difficult to fly a Tiger Moth well.”

De Havilland Moths were British-designed light aircraft produced between the early 1920s and the 1950s for the civilian and military markets. They were named after their early iteration’s wings, which could fold backwards against the fuselage – like a moth. Thirteen models were produced; the best known are the Gipsy and Tiger (in which second world war RAF pilots learned to fly), and 250 of the nearly 9,000 original Tiger Moths are still flying. The attraction for collectors lies in their fun coupled with steadiness of value. Keep one in good shape, and in the short to medium term you’ll likely sell it for what you paid.

“Buy for £45,000 today, and it’ll need a lot of work. Average planes cost £60-70,000, good ones around £85,000,” says Stuart McKay, secretary and 1975 founder member of the UK-based de Havilland Moth Club, the buying and ownership go-to. He adds that a good plane will likely have had its wing fabric and fuselage replaced – which costs around £30,000. On top of that is airframe and engine work. The club lists a California-hangared Tiger Moth for $95,000.

We’re often encouraged to have experiences over possessions and Moths provide an opportunity for both. In his book The Moth and the Mountain, author Ed Caesar tells how, in 1933, Maurice Wilson, who had no flying or mountaineering experience, flew a Gipsy Moth from the UK to the Himalayas to join the race to scale Everest. Only a Moth would suit the derring-do of the task, or fit the story. And the combination of Moths’ pluck, simplicity and romance remains today.

Former Boeing pilot Jonathan Turnbull, from Hampshire, fell in love with Moths as a boy and, having spent years flying airliners, wanted to evoke those younger days. He bought his Tiger Moth for just under £85,000, and is now a member of the Tiger Nine formation flying team. In 2019, he piloted one of 13 Moths from the UK to take part in a show in Switzerland: “It was around 15 hours’ flying for a 15-minute display, which took place during a heavy shower….” Such is Mothlife.

Illinois-based Tom Peterson notes that flying his 60kts Tiger Moth from California to Illinois took more than 26 hours versus three-and-a-half hours on a Boeing 757. But it was worth it. He also recounts a more hairy experience. “Flying back from Washington DC the crankshaft broke, the propeller departed flight, smashing the engine cowling and striking the wing.” He adds: “That propeller hangs in my sunroom porch today.”

Moths, he reassures, are inexpensive to own and operate – simple, strong and consuming eight gallons of fuel and one quart of oil per hour. Parts are easily available, as their basic architecture is shared with other de Havilland aircraft: “Including maintenance, allow $300 an hour for an active aeroplane.” For potential US buyers, California’s Platinum Fighter Sales currently has a 1939 DH82c Moth (with only 19 hours’ flying since restoration) for $65,000.

Northamptonshire farmer Stuart Beaty uses his Tiger Moth for practical purposes. “I fly between farms and around the countryside,” he says. “It’s great for crop inspection as it’s fairly slow.” Servicing costs around £2,000 a year, continues Beaty, plus fuel and oil. “Insurance is high for inexperienced pilots, but reduces with experience, at between £1,000-£2,000 a year.” Occasionally, he breaks with routine and takes flight for a real adventure: he’s flown a Tiger around Southern Africa, and taken another down the Nile as far as Khartoum. His plane also counts some illustrious passengers in its transportation history: King Charles flew in it in 1980.

HTSI
Why vintage seaplanes are taking off 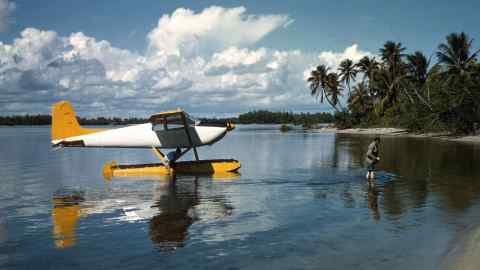 A restoration can be pricey but not as eye-watering as a Spitfire. It cost Indianapolis-based Alan Reber $90,000 and two years to repair his Tiger Moth, which was built in 1940. He now flies 50-75 hours annually. His buying tip is sobering: “Make serious enquiries into the history of that aircraft, then ask yourself if this is really the type of aeroplane you want? It’s not for everyone.” He bought his from Australia; controller.com has three Moths listed in Australia from A$100,000 (about £57,000).

“The DH82a Tiger is one of the first ‘modern’ aircraft with relatively modern handling characteristics,” concludes Lloyd, who is co-owner of a 1940 Tiger. It is, he continues, “an aircraft with which every pilot should become acquainted”. And for those looking for adventure – at a leisurely pace – it holds a special charm.