Oil and gas groups under pressure to plug leaks

Boom times for US oil and gas have shone a new spotlight on an old problem: leaks of methane, a powerful greenhouse gas.

While US energy-related carbon dioxide emissions have declined as natural gas displaces coal at power stations, methane emitted by the oil and gas sectors has not.

Aside from the climate danger, oil and gas companies say they would rather make money by selling it.

Quantifying volumes is difficult, however. As US energy industry and regulators attempt to rein in methane emissions, they are grappling over the best ways to measure them.

The most notorious recent leak took place over four months in 2015-16, when about 5bn cubic feet of gas seeped from the Aliso Canyon storage site in Los Angeles. But many leaks of the colourless, odourless gas are dispersed and sporadic, evading detection.

Official inventory data from the Environmental Protection Agency show that between 2005 and 2017, methane emissions from US petroleum systems climbed 2.5 per cent to 1.5m tonnes, led by growth from upstream producers. Emissions from natural gas systems declined 3.4 per cent to 6.6m tonnes over the same period.

The EPA data are based on a “bottom up” approach of estimating emissions at individual sites and extrapolating them to the whole country — a method with limitations, according to a 2018 government-sponsored study.

Guidelines for checking inventories have not been updated since 2006 — before fracking transformed US oil and gas production. Bottom-up measurements are taken only periodically, “so if the emissions occur in a burst at midnight, no one is there to measure it, you haven’t captured it and you come to a false sense of the emissions reading”, said James White, a professor of geological sciences at the University of Colorado Boulder who chaired the study.

Another “top down” approach uses sensors on aircraft, satellites and towers to estimate methane levels in the atmosphere. But the network of sites is “sparse”, according to the 2018 study, and it can be difficult to trace emissions’ sources.

Timing is also a drawback of atmospheric measurement. Leaks can rise and fall with gas volumes, for example when heating demand is high during a cold snap. “One thing that can be problematic about the ‘top down’ approach is that you’re assuming operations are steady-state and constant. That’s just not the way that we necessarily operate,” said Sandra Snyder, senior regulatory attorney at the Interstate Natural Gas Association of America, a pipeline industry group.

Recent studies have shown “conflicting results” on the trend of methane emissions from oil and gas operations in the US, according to a 2019 paper by scientists at the National Oceanic and Atmospheric Administration, which itself found a “modest increase”. But another paper co-ordinated by the Environmental Defense Fund, a campaign group, found methane emissions from the oil and gas industry were at least 60 per cent higher than government statistics suggested.

Under President Donald Trump, the EPA has sought to loosen standards for methane leaks from the oil and gas industry. Among its proposals, bigger oil and gas wells would need to be monitored once instead of twice a year — a plan supported by many in the industry.

If the emissions occur in a burst . . . you come to a false sense of the reading

Environmental groups oppose the change. Mark Brownstein of the EDF said a large portion of emissions was coming from a handful of sources, often from equipment failure or worker error. With more frequent inspections, “you’re constantly on the lookout for situations where the equipment is not operating as designed”.

Technology to find leaks has improved. Optical imaging cameras that detect traces of gas can be mounted on drones, for example, reducing the cost of visiting far-flung well sites.

The industry has announced voluntary measures to address methane leaks. The Oil and Gas Climate Initiative, an international group of upstream producers whose US members include Chevron, Exxon Mobil and Occidental Petroleum, in September committed to cut methane lost to the atmosphere below 0.25 per cent of gas sold by 2025, down from 0.32 per cent in 2017.

The One Future Coalition, a group of US natural gas companies, has outlined a goal of cutting methane emissions to less than 1 per cent of gross natural gas production and delivery, which the group contends would provide “clear and immediate [greenhouse gas] reduction benefits as compared to any other fossil fuel in any other application”.

“It’s part of our value proposition, part of our business model, to be able to differentiate natural gas coming from the United States.” 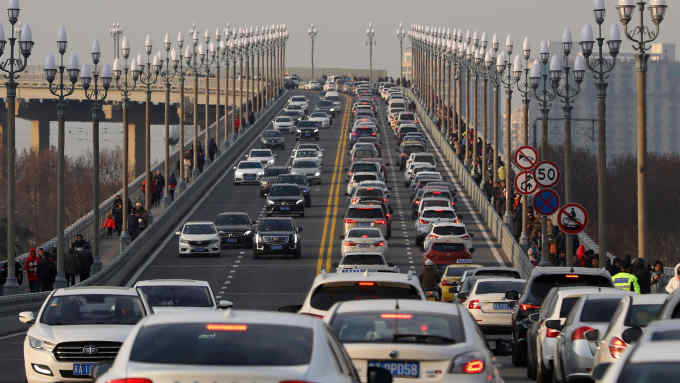