Nano-satellites dominate space and spread spies in the skies

Small is becoming beautiful in the world of satellites. Miniaturisation of electronics and components means you no longer need to send a tonne of metal into orbit for telecommunications or Earth observation. Small satellites promise to provide more comprehensive coverage at much lower cost.

India’s Polar Satellite Launch Vehicle mission last month carried 20 spacecraft into orbit. Alongside its primary load — a 727kg mapping satellite called Cartosat — the rocket carried another 19 payloads weighing a total of just 560kg between them. Twelve of these were a flock of Dove satellites from Planet Labs, a US-based Earth-imaging company.

The largest number of small satellites launched at the same time to date was the 33 sent into orbit in June 2014 by Russia’s Dnepr Cluster Mission. A new record is scheduled for later this year when Sherpa, a satellite deployment system from US-based Spaceflight Industries, carries 87 small payloads into orbit for a variety of scientific and commercial customers, alongside Taiwan’s large Formosat 5 satellite, on board a SpaceX Falcon 9 rocket.

Stuart Martin, chief executive of the Satellite Applications Catapult at Harwell in the UK, says there are advantages for Earth observation in going small. “By having a large number of small satellites rather than a few big ones, you can fly over the same piece of ground much more frequently to obtain images.

“A conventional constellation of satellites might take a detailed image of a particular place every week or two,” he says. “Now we are talking about being able to observe everywhere on Earth every 15 minutes.” That would make a big difference for monitoring crop growth or an unfolding natural disaster.

A term often heard in discussions of small satellites is CubeSat — a 10cm cube based on standard nano-satellite design. These modular units can effectively be packaged together in larger clusters, of up to six times their original size, which allows for efficient multiple launches.

Small satellites are not a new idea. In the late 1970s, an engineering team at the University of Surrey was a pioneer in building small, inexpensive satellites from off-the-shelf components, rather than the costly special components favoured by the aerospace industry.

The success of the 72kg UoSat-1 led the university to spin out Surrey Satellite Technology Ltd in 1985 to commercialise the technology.

Small satellites, meanwhile, have moved from being a niche sector for research and special missions, such as disaster monitoring, and into the industrial mainstream.

There are two very different ways of looking at the penetration of small satellites into the market — by number launched and by mass — says Micah Walter-Range, director of research and analysis of the Colorado-based Space Foundation.

In 2015, 262 spacecraft were launched, of which 64 per cent fell into the small category and 48 per cent were nano-satellites below 10kg. But by mass, small satellites accounted for just 2 per cent.

Several companies based in the US are developing innovative schemes involving global networks of small satellites for communications or Earth observation. OneWeb plans to have 648 satellites weighing 150kg each, circling the world to provide worldwide affordable internet and mobile telecoms. Planet Labs is establishing a similar network of more than 100 satellites to image the world for applications from agriculture and forestry to energy and mining. 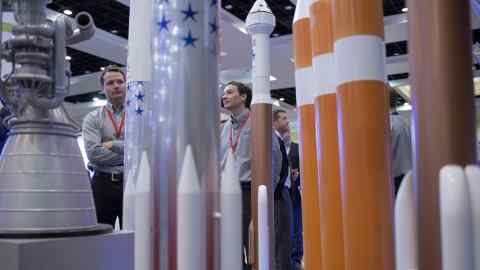 Small satellites are normally designed to operate in low orbits just a few hundred kilometres up. In contrast, geostationary orbits of 36,000km above the Earth enable satellites to maintain the same position above the equator by rotating at the same speed as Earth — a position that is advantageous for broadcasting, communications and remote sensing.

The International Space Station, in orbit 400km above Earth, is turning out to be a useful launch platform for small satellites. They are brought up in batches and later released into somewhat lower orbits where they could not collide with the ISS. The ISS deployed 49 satellites in 2015 and 36 so far this year, according to the Space Foundation. Most are launched from a special CubeSat deployment device developed by NanoRacks of the US for the ISS. “There is a tremendous backlog of small satellites waiting to be launched,” says Mr Walter-Range. “For example, Rocket Lab have 18 months of solid bookings even though they haven’t flown yet.”

With small satellites going into space at an ever-increasing rate, there is a danger of some orbits becoming overcrowded and a risk of collisions.

“It is important to find ways of managing that environment,” says Mr Martin, “but the low orbits of most satellites have the advantage that they will automatically decay and burn up in the atmosphere after a few years, without creating permanent space debris.”