Trumps keep controversy in the family

The emails offering Don Jr, the US president’s eldest son, Russian information on Clinton has placed him in legal jeopardy

In the long history of White House scandals, this is the first to begin with a pop song called “Amor”.

Emin Agalarov, a Russian-Azeri pop singer, came to the US in 2012 in search of greater fame. While in Los Angeles, he recorded a music video with the then Miss Universe Olivia Culpo. On the back of this friendship, Emin’s billionaire father Aras Agalarov decided to stump up some of the money for the next Miss Universe pageant in Moscow.

That brought the Agalarovs into contact with Donald Trump, a fellow billionaire real estate developer who owned Miss Universe. They finalised the deal to host the pageant at a June 2013 dinner, also attended by Emin’s publicist Rob Goldstone, in Mr Trump’s Las Vegas hotel.

“These are the most powerful people in all of Russia, the richest men in Russia,” Mr Trump said as he shook hands with the Agalarovs on a red carpet.

Mr Trump’s previous life, with its heady mix of real estate, entertainment and celebrity, collided dramatically this week with his new role as president when Emin Agalarov and Mr Goldstone emerged as the conduits in an apparent attempt to pass damaging material about Hillary Clinton to Donald Trump Jr, the president’s eldest son.

After a year during which the Trump family has fended off allegations that it colluded with Russia during the 2016 election, emails published this week showed Mr Goldstone, who once worked for British tabloid newspapers, offering Russian information about Mrs Clinton to Don Jr, as he is known.

At the very least, the explosive revelations have turned the younger Mr Trump into a figure of ridicule — a campaign neophyte whose questionable approach to engaging with an alleged Kremlin representative could have left him open to blackmail.

At worst, his exchanges with Emin Agalarov and Mr Goldstone — and the Russian lawyer they introduced him to — could expose him and other members of the campaign to legal jeopardy over laws that bar campaigns from receiving anything of value from foreign individuals or governments. Don Jr has already provided several inconsistent explanations about the events.

“The only time you want a comparison to a character in Monty Python is if you’re going for some comedic actor of the year award,” says Mike Rogers, former Republican congressman and head of the House intelligence committee — after Don Jr was compared to the “idiot in society” sketch. Or as the normally Trump-friendly New York Post tabloid put it: “Donald Trump Jr is an idiot” for accepting the offer from a “bozo British publicist”.

The emails from Mr Goldstone to Don Jr? appear to provide the first direct evidence of potential collusion between the campaign and Moscow. The publicist offered to set up a meeting with a Moscow lawyer who could provide information that would “incriminate” Mrs Clinton. “I love it,” Don Jr replied about the proposal.

Six days later, Don Jr, Jared Kushner, the president’s son-in-law, and Paul Manafort, the then campaign manager, met the lawyer, Natalia Veselnitskaya, at Trump Tower in New York. It emerged on Friday that Rinat Akhmetshin, a Russian-American lobbyist also attended the meeting — a fact that had not been disclosed by Mr Trump Jr. Lawyers for the Agalarovs said the purpose of the meeting was not connected to the campaign. The elder Mr Agalarov said the Goldstone emails were “all made up”.

Mr Rogers says Don Jr should have been very cautious after he received the email offering him information from a foreign government. “That should have set off every red flag. You would hope they would say ‘I can’t take that kind of meeting’ and picked up the phone and called the FBI,” he says.

In Paris for Friday’s Bastille Day celebrations, Mr Trump said Don Jr was a “wonderful young man” who had taken the kind of meeting that “most people in politics probably would have taken”.

The controversy has intensified the spotlight on the prominent roles played by his family members, despite their lack of obvious qualifications in government or political life. The revelation of emails to Don Jr, 39, came just days after the incredulity at the G20 summit in Hamburg when the president let Ivanka, now a White House aide, replace him at the table.

The image of Ivanka sitting next to China’s president Xi Jinping angered those who say the White House is being run by a dynastic group of novices. Mr Kushner, Ivanka’s husband and also a White House aide with a sprawling portfolio that includes China, Middle East peace talks and reinventing government, was present at the now-infamous meeting in June last year with the Russian lawyer.

Bill Flores, a Republican congressman, this week urged Mr Trump to push his family aside. “I wish that he would get them out of the way so that we could have professional staff at the White House handle policy issues,” he told a Texas television station.

The revelations about Don Jr have turned attention back to Mr Trump’s attitude towards Russia. The president had just returned from the G20 where, after spending 135 minutes with Russian president Vladimir Putin, he declared that it was “time to move forward” with Russia — the inference being that Washington should stop fixating on allegations that the Kremlin meddled in the US election.

Mr Trump has been unable to shake suspicions about his relationship with Russia that were sparked during the campaign when he refused to criticise Mr Putin. Even after the US intelligence community concluded that the Kremlin had orchestrated cyber attacks to help Mr Trump, he has refused to categorically accept that view. During the campaign Mr Trump denied the existence of any connections between his aides and Russia. When Democrats suggested that Moscow was behind the hacking of Clinton campaign emails, Don Jr described the claim as “disgusting”.

The emails are a reminder of Mr Trump’s unusual associations with Russia, most notably through the 2013 Miss Universe pageant. People involved in the event say the Agalarovs wanted to promote Emin’s singing career. Contestants spent much of the three weeks before the event at their Moscow estate and some appeared in another of Emin’s music videos alongside Mr Trump.

“We were all laughing about how easy life would be if you had a dad who could buy you the [world’s] second-most watched TV event to try and make you famous,” says Olivia Wells, who competed as Miss Australia.

Mr Trump spent less than 24 hours in Moscow for the event, where he went to a dinner attended by Sberbank chief executive Herman Gref and filmed his video cameo. He then attended an after-party with the top-placed contestants from the pageant. “He looked like such a loner, saying hi, shaking hands, he looked bored, almost,” says Bob Van Ronkel, a US showbiz fixer who worked on the pageant.

The Agalarovs and Mr Trump announced plans to build a Trump Tower in Moscow. Emin told Forbes this week that had Mr Trump not run for president they “would probably be in the construction phase today”.

The emails and conversations with Don Jr are now likely to become part of the investigation by Robert Mueller, the justice department special counsel, into whether the Trump campaign colluded with Moscow to influence the election.

“His going forward [with the meeting] based on the email has him soliciting a foreign national contribution because that is offering him information that is either from Russia or coming from a foreign national,” said Larry Noble of the Campaign Legal Center.

Mr Rogers, the former lawmaker who was on the Trump transition team, says the best explanation for what Don Jr had done was incompetence and a lack of political experience. He says this was the kind of behaviour that helped foreign spies. “If you are an intelligence agency seeing this anywhere in the world, you are saying this is really good for us. I don’t think he was witting. He was running way ahead of his headlights,” he says. “The biggest winner this week is Vladimir Putin — again.”

Mr Goldstone has downplayed his connection with Don Jr and the meeting he arranged with Ms Veselnitskaya — suggesting that the language in the email was mere bluster. A music publicist who toured with Michael Jackson, he told the Financial Times that his relationship with Don Jr was “limited”.

Mr Goldstone said: “I regret that what was PR hype and lingo has turned into this misunderstood media madness.”

Although the email to Don Jr describes Ms Veselnitskaya as a “Russian government attorney”, it is not clear whether a lawyer based in the Moscow suburbs would have access to top-level Kremlin information of the sort Mr Goldstone was promising. Mr Van Ronkel, who has introduced several Hollywood celebrities to Mr Putin, says the Kremlin would have chosen a better-known celebrity as an intermediary.

The saga has sparked recriminations in the White House with officials pointing the finger at each other over the leak. Much of the speculation has focused on Mr Kushner and Mr Manafort, both of whom were copied on the Goldstone emails.

Whatever the implications, the furore will continue to hobble an administration that is still struggling. “Everyone is watching the scandal unfold in real time,” says Julian Zelizer, a political historian at Princeton University. “The story itself is dramatic, this time with the principal releasing the information himself. Even in Watergate, we had to wait for the congressional hearings.” 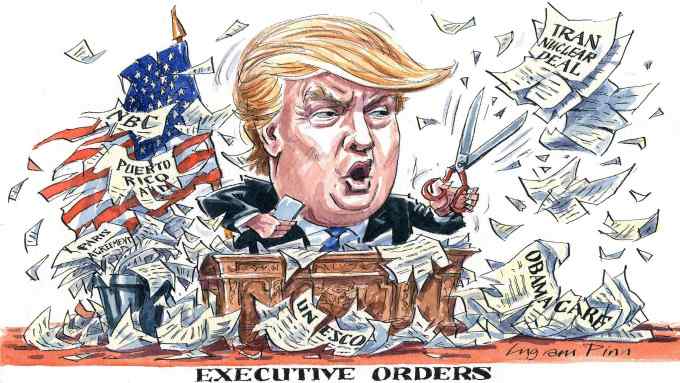 The year ended for the US president with a political reversal in Alabama but victory on tax reform, alarm at his foreign policy and a cultural reckoning on sexual harassment. Catch up on the year’s comment and analysis