Why women are worse off in retirement

£2.7bn state pension back payments are the latest indication of inequalities
Margaret Wilson

Setting out increases to the state pension age back in 2017, John Cridland stated: “I want Britain to be the best country in the world in which to grow old, where everyone enjoys the dignity and security they deserve in retirement.”

So has he succeeded?

The independent review led by the former director-general of the CBI spoke of “fairness between generations” but recent events have underlined the raw deal many women are getting in later life.

On Budget day, news was slipped out that roughly 200,000 women could be in line for payouts averaging £13,500 each after a government review found systemic underpayment of their state pension for up to two decades.

The estimated £2.7bn underpayment affects women whose husbands reached pensionable age before 2008 and who were unknowingly entitled to “enhanced pensions” that would have boosted their payments by up to 60 per cent.

Millions of women have protested about changes to the state pension because it matters much more for us. Numerous studies have evidenced the “gender pension gap” in the private pension savings of men and women

Sir Steve Webb, the former pensions minister who campaigned for the scale of underpayments to be investigated, described the announcement as “mind-numbing”. The Department for Work and Pensions said it will write to those affected, but Sir Steve has devised a free online tool to help older women discover if they have missed out.

Sadly, this is yet another example of how women are far from equal when it comes to pension provision.

Millions of women have protested about changes to the state pension because it matters much more for us. Numerous studies have evidenced the “gender pension gap” in the private pension savings of men and women.

The average woman in her twenties is on course to have a staggering £100,000 less in her pension pot at retirement than a man of the same age, according to research released by Scottish Widows on International Women’s Day.

Meanwhile, there is increasing evidence that the effects of the global pandemic are disproportionately affecting women’s finances.

Most of you will have heard of the various pension campaign groups protesting against the sudden acceleration of the women’s state pension age from 60 to 66. This was a decision that a whole cohort of women born in the 1950s — this writer included — were totally unaware of, and unprepared for.

It was a dark day last September when Waspi campaigners lost their long-running Court of Appeal challenge against these increases. However, it has raised awareness of the future financial challenges women face.

As a 61-year-old single mother, it is common to lurch through day-to-day existence and limp from one burst of temporary work to another. However, when you can’t afford to stop working, old age is far from your mind.

The words of my own mother who deteriorated rapidly in her late sixties after a lifetime of teaching are etched on my brain: “By ’eck, old age when it comes, it comes fast!”

Online groups, such as RestLess, have been a great source of moral support, yet it is heartbreaking to read so many tales of poverty and financial hardship.

Vast numbers of women relay how their savings have been used to pay for the shortfall in their expected state pension from the age of 60. Many have had to sell homes to stay afloat. Those in work lament their aching limbs and tired, worn out bodies — especially when their work is physically demanding.

And there are those with no alternative but to claim universal credit.

In the five years after increases in the state pension age started to take effect, the number of women aged 60 and over receiving out-of-work benefits rose by 183 per cent.

You might be unfairly stigmatised as a “lazy benefit scrounger”, but a huge amount of work is required to receive any help you might be entitled to.

Nor is any slack cut for the over-60s experiencing age discrimination in the jobs market — even though a DWP study acknowledged this was a problem back in 2012.

Your benefits entitlement will be regularly assessed on spending an expected 35 hours a week on job searches, yet the rejection emails arrive thick and fast, as I can personally validate. When McDonalds knocks you back, you hit an all-time low.

What hope is there for future generations that women’s finances in retirement could improve? Pensions policy changes will have far-reaching effects as the hope of a restful retirement eludes more women and men, especially those on the poorer rungs of society.

Social media is a hotbed of angry exchanges between those adversely affected and those who believe that equalising the state pension age was the right thing to do (the sleight, “Well you wanted equality!” is all too common).

The argument for raising the state pension age hinges on longevity. “We are all living longer,” concluded Cridland’s 2017 report. But are we really?

Even before Covid-19, the UK’s life expectancy figures were stalling with a 2019 study by the King’s Fund warning that the UK’s “poor standing” in international life expectancy league tables required “urgent action”.

Its authors argued that UK mortality rates were “the tip of a much bigger disease iceberg” — a fact the pandemic has thrown into sharp relief. Recommending an accurate assessment of these changes on different population groups and areas, the King’s Fund concluded that future government policy should be evidence-led, rather than based solely on age.

State pension
Thousands of grandparents miss out on pension credits 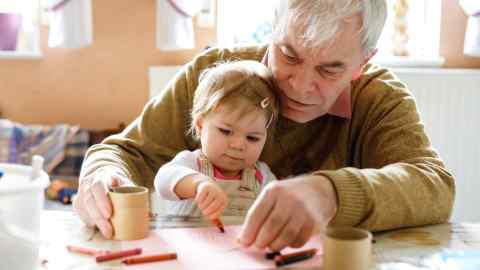 I firmly believe it should also consider how society is on a downward trend to devalue caregivers. Another factor that weighs heavily on women’s retirement finances is the need to provide care — typically unpaid — to both grandchildren and elderly relatives.

This exacerbates the impact of the gender pay and pension gaps as women buckle under the strain of juggling work and family commitments — pressures that will continue to be felt for generations to come.

British insurer SunLife estimated that grandparents are saving working parents some £22bn a year in childcare costs. Around 1m grandparents providing care could have also missed out on state pension credits — yet again, due to a widespread lack of financial awareness.

The government’s next review of state pension age is due by July 2023, with some politicians already arguing it should increase to 75 years old. Considering the huge variation of circumstances affecting people’s health and wealth in later life, greater “generational fairness” has never been more needed.

Evidence piles up for how carers are not valued / From Hilary Land, Emerita Professor of Family Policy, University of Bristol, Bristol, UK