Slack and Microsoft fight for millions of remote workers

Richard Waters in San Francisco and Tim Bradshaw in London

Slack and Microsoft have reported big jumps in the number of new users and business from their workforce collaboration platforms, as the coronavirus crisis reignites one of the software industry’s fiercest rivalries.

Slack’s group messaging app has notched up a net increase of 7,000 paying customers since the start of February, or 40 per cent more than it normally has in an entire quarter, Stewart Butterfield, chief executive, said in an interview.

At the same time, Microsoft said the number of people using its rival Teams service on a single day early this week reached a record 44m. It first surpassed 20m only four months ago.

“I think it’s going to go down as a turning point in history for the way people work,” said Jared Spataro, head of Microsoft 365. “I don’t think we’re ever going back to the old way of working.”

“In some respects, we were made for this,” added Mr Butterfield of the sudden dislocation in work life.

The emergence of a new generation of group messaging and collaboration tools for workers has been given a huge boost by the present crisis, according to industry observers.

“This may have jump-started the market by seven years,” said Wayne Kurtzman, an analyst at tech research firm IDC. Forcing millions of people to change their everyday work practices “is a perfect opportunity for companies to become the digital businesses they have wanted to be”, he added.

Along with video conferencing start-up Zoom, Slack was initially seen by Wall Street as a beneficiary of the explosion in remote working.

But its share price has since fallen back nearly 40 per cent on worries that the surge in remote working would not translate into new customers, and a week ago Slack executives sounded a cautious note on a call with Wall Street analysts.

Mr Butterfield said that at the time he was less certain about generating new sales from the crisis, and did not want to sound “ghoulish” about profiting from a public health emergency. But since then, the reservations have dissipated.

Referring to the soaring use of his company’s app over the past week, he said: “We’ve seen hockey sticks become vertical lines — that’s good for the business.” As companies become more cautious in a crisis, “the one hole that might be punched in that wall of no spending is tools that make it easier for organisations to keep operating”, he added.

Emma Jacobs
Working from home provides a window to the soul 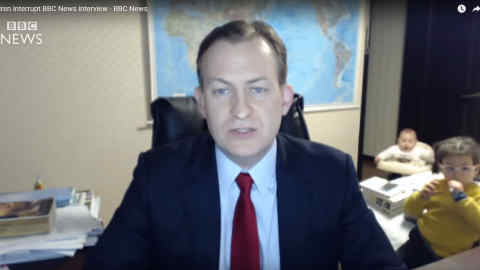 Microsoft and Slack have pushed ahead with long-planned updates of their services this week. New features announced by Microsoft on Thursday include AI to filter out background noise during video conferences, and a way for users to keep using a message service while offline.

Slack, meanwhile, unveiled a redesign of its app on Wednesday to make it easier to use.

While activity on Teams revolves mainly around simple video conferencing and document sharing tasks, Slack is a more complex platform based around group messaging and tying together a company's different software applications — something that has slowed its adoption, according to analysts.

“Slack is still encumbered by having to explain what it is, the full capabilities of the platform,” said Mike Facemire, an analyst at Forrester Research.

“The intent [of the redesign] is to make Slack much less daunting, we’re pulling back the sophisticated features that people don’t need in the early days,” Mr Butterfield said. The company last announced a daily user number in October, when it reached 12m.

Along with making its service easier for a huge group of new workers who are being forced to use it for the first time, Slack faces extra challenges in more difficult economic times.

Microsoft includes Teams as a free add-on for customers of its 365 suite of productivity tools, something that will make businesses that already use some of Microsoft’s services think twice about paying extra for Slack, said Mr Facemire.

Its popularity among tech start-ups and large number of small business users, compared to Microsoft’s base of bigger and more stable businesses, might also prove a vulnerability.

Of the 110,000 organisations that pay for the service, “there’s a possibility that we might lose 5,000 of those customers to bankruptcy in the next six months,” Mr Butterfield said.

Microsoft, meanwhile, is redoubling its efforts to promote its suite of software as a simpler and more economic answer for businesses facing upheaval in their operations. The alternative — stitching together a set of tools like Slack, Zoom and file storage system Dropbox — is like “walking around with a Palm Pilot, a flip phone and an MP3 player in our pockets” rather than using a smartphone, said Mr Spataro.

Facing intense pressure, though, many workers will gravitate to the most effective tools to do their jobs, whatever their IT departments recommend. said Mr Facemire. With a more complete set of collaboration services — such as shared messaging channels that link people inside and outside a company — Slack should still find a ready audience, he said.

The explosion of work on the new collaboration platforms has put a strain on the services, with Teams suffering an outage in Europe at the start of this week.

Mr Spataro said Microsoft had increased capacity for the service six-fold over the past 30 days, but struggled to balance demand across its various data centres as the pattern of traffic shifted dramatically. “We just have seen tremendous, tremendous demand as people have moved to work from home.”

In a video released to coincide with Microsoft’s update to Teams, Satya Nadella, chief executive, predicted the coronavirus crisis would have a lasting impact. “We’re going to learn a tremendous amount, transform how we work together. There’s really going to be a fundamental structure change in how we transcend some of these geographic boundaries.”

Video: Coronavirus: why the west will be hit harder