How I Spend It: Chris Blackwell ‘believes in the roll of the dice’

I started playing backgammon with my parents at the age of eight or nine. I loved everything about the game: the tactility of the pieces, the civility of it, spending time with friends. While I loved all games as a child, backgammon was my favourite. I still play at least once a week – and sometimes every day if time allows – and I’ve played all over the world: at Annabel’s in Mayfair, on beaches, you name it. Anywhere that I sleep I have a board nearby.

When I was growing up in the 1950s in Montego Bay, the card game canasta was very big. My mother was always playing and there were times when I never got fed because the games would last for hours and there was often gambling involved. She also loved to play backgammon – and swim – at Ian Fleming’s villa, GoldenEye, on the north coast of Jamaica, where friends like Errol Flynn and Noël Coward often gathered. After Fleming’s death, I wanted to buy the property for her, but I wasn’t in the best place financially, so I asked Bob Marley if he wanted to buy it. He didn’t feel the vibe. A few years later, I was able to purchase the home myself and now run it as a hotel. It felt like there was a kind of serendipity at work.

Backgammon is a game of skill and chance, and in life I very much believe in luck, the roll of the dice. I walk a lot and I love that there is always the random opportunity to take a different path. I do that in the hope of seeing or learning something new. I have always been like that in all facets of my life, including backgammon, and feel that I’ve been very lucky overall. Some of my best relationships – with Bob Marley and the Wailers, for example, whom I met by chance when they were stranded in England after a show – have been formed with a bit of luck. I was asked to scout bands in Birmingham in 1965 and heard a voice that sounded like Ray Charles, but higher pitched. It ended up being Steve Winwood. I was just lucky to have been selected to scout that day, or I would have never met him.

It’s a game of chance, and in life I very much believe in the roll of the dice

Over the years I’ve bought many tables and sets, but my most prized one was purchased from Hugh Hefner’s backgammon club/disco, Pips, in LA in the late 1960s. Pips was named for the 24 points on the backgammon board, and Hefner was very passionate about the game, though I never had the chance to play with him. This particular set is huge and painted in the striking red and green colours of Gucci. The pieces are also quite large – 1.5in diameter – which makes it even more unusual. I went to the club one day, saw it and thought it was incredible, so I ordered one on the spot. It’s currently at my country house in England and really is the game at its best.

Another favourite takes pride of place in the Fleming villa. It’s designed with handpainted peacocks, and everyone who stays plays on that board. Another board I cherish is the one given to me by my late wife, Mary Vinson. It is a beautiful leather table. You take the top off to reveal the board. One day when I was cleaning out the apartment, inside the drawer was a letter from Mary to me. I left it there for safekeeping, and it still remains. This board is currently in my New York apartment and during Covid it was busy. I’d play, drink coffee and have cake every evening, stopping only to clap for the healthcare heroes at 7pm. 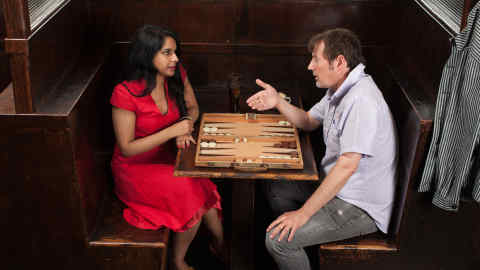 Ultimately, it is the company that makes the game so special and GoldenEye – and Jamaica in general – has seen a lot of action over the years. Prior to Covid, I’d play with our guests at Bizot Bar and we also used to host a tournament at my other resort Strawberry Hill; I look forward to being able to do these things again. Worthy opponents over the years have included everyone from Grace Jones to Princess Michael of Kent. I enjoyed long games with the late Broadway producer Terry Allen Kramer in New York, on Harbour Island and in London – and Dennis Hopper was an entertaining competitor too. The only place I’ve lived where I didn’t play backgammon at all was in Miami; people there were more interested in looking at women in bikinis than concentrating on a board game.

I’ve played every day since returning to Jamaica after lockdown. My girlfriend beat me solidly the whole time we were in New York; she was on a lucky streak and it was unbelievable to both of us. That’s the luck of the dice.