In Africa, a start-up scene is taking shape, capable of lifting millions out of poverty by transforming the continent’s largest industry: agriculture.

The African continent contains more than a quarter of the world’s arable land, and farming contributes 15 per cent of its total gross domestic product, equivalent to $100bn a year, according to consultancy McKinsey. Yet a traditional, manual approach of smallholder farmers has kept yields below full capacity.

Now technological innovation is starting to help boost production. Precision Agriculture for Development (PAD), a Boston-based non-profit organisation, for example, uses text messaging to teach farmers in western Kenya how to use agricultural lime — which helps combat soil acidity — as well as how to fight the fall armyworm, a pest that tears through crops and destroys livelihoods.

PAD, which works in several countries including Ethiopia, Kenya and Rwanda, is one of a growing number of non-profit organisations and companies disseminating technology tools to transform the growing practices of smallholders — farmers with small plots of land relying almost exclusively on family labour.

The dual effects of climate change and population growth have thrust smart agriculture on to the agenda, as farmers and governments scramble to prepare for rising food demand.

It says that its instructions via text message — including reminders about planting and weeding schedules — increased sugar cane yields in Kenya by 11.5 per cent.

Agricultural technology has already seen impressive uptake in the UK, US and Australia, where many growers now deploy a sophisticated range of drones, satellite data, soil sensors and internet-of-things-enabled devices.

But the UN notes that technology has caught on more slowly in the developing world, where four-fifths of food is produced by smallholders, because of a shortage of capital as well as lower rates of literacy and mobile telephony use.

Yet a cohort of indigenous African companies, as well as multinationals such as the Climate Corporation and institutions such as the World Bank, are exploring ways to adapt and broaden smart farming technologies to bring the precision agriculture revolution to the continent.

Zenvus, a start-up based in Owerri, the capital of the Nigerian state of Imo, collects and analyses vast amounts of soil data across Nigeria, offering tailored advice to farmers on what, when and how to plant. Its digital services allow smallholders to view real-time crop prices, raise capital and crowdfund on their computers and smart devices.

“This will have a tangible effect on poverty in Africa because most households and families are going to see higher incomes,” says Ndubuisi Ekekwe, the company’s founder.

AgroCenta, another platform, brings advice and weather forecasts to Ghanaian farmers and, most important, allows them to sell their crops digitally to large companies such as Nestlé and Diageo. “Smallholder farmers who trade on AgroCenta enjoy access to a structured market to trade, bypassing exploitative middlemen,” says Francis Obirikorang, chief executive.

Yet obstacles remain even when the tools are made affordable to small-scale growers.

Lower literacy rates in rural areas mean the delivery of apps and services must be accompanied by extra time-consuming training.

In addition, telephony penetration rates vary wildly across sub-Saharan Africa, which in 2017 had an overall rate of 44 per cent, compared with a global average of 66 per cent. “Internet penetration rates present the biggest obstacle to tech-based farming in Africa,” says Mr Obirikorang.

There are also concerns that new technologies might push smallholders towards harmful chemical-based farming methods, which boost yields in the short term but can deplete soils over time.

“Farming provides an extremely important livelihood so ensuring new technologies do not destroy jobs and incomes is vital,” says Vicki Hird, campaign co-ordinator at Sustain, a food and environment consultancy.

Ultimately, the success of smart farming in sub-Saharan Africa will hinge on education, connectivity and financing, all of which depend on governments.

Agritech companies, however, are optimistic. “There is so much appetite for investment,” says Mr Ekekwe. “It is the one area where many people believe we will see exponential growth.”

Charlie Mitchell is a leader writer for The National, based in the Middle East. 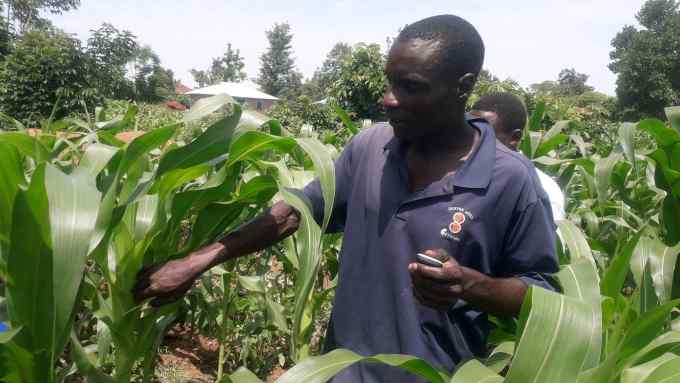