Candidate who likes to refer to the Alamo prepares for showdown

Ted Cruz likes to quote William Travis, one of the resistance leaders who fought at the Alamo in 1836 during the Texas Revolution, who said that he was “determined to sustain myself as long as possible and die like a soldier”.

But when Texas joins 10 other states in voting on Super Tuesday, Mr Cruz will hope that his presidential campaign in the Lone Star State does not end like the Alamo — a valiant and symbolic effort that was ultimately doomed.

Texas is the most important state to vote on Tuesday because it awards 155 Republican delegates, the second-biggest tally in the primary calendar after California, and one-quarter of the delegates at stake on March 1. In the same way that Marco Rubio needs to win his home state of Florida on March 15 and John Kasich, the Ohio governor who is running a long-shot campaign, must secure a victory in his state on the same day, Texas is crucial to Mr Cruz’s presidential hopes.

While Donald Trump remains the clear frontrunner in many of the Super Tuesday battlegrounds — and leads Mr Rubio by 49 per cent to 16 per cent in the latest national poll — Mr Cruz has a commanding lead in Texas. The latest CBS News/YouGov survey in the Lone Star State puts him 11 points ahead of Mr Trump with 42 per cent.

When Mr Cruz launched his campaign last March, he was seen as a long-shot. That was mainly because the ultra-conservative politician has little institutional support in his party. He is despised by his Republican Senate colleagues who see him as an obstructionist who is unwilling to compromise.

Over the past year he has demonstrated an ability to raise significant campaign money, and then assembled a grassroots operation of religious conservatives that propelled him to victory in Iowa and solidified his position in the top-tier of candidates. But his poor showing in South Carolina, a heavily evangelical state, cast doubts on his longevity, setting up Texas as a must-win state for him. 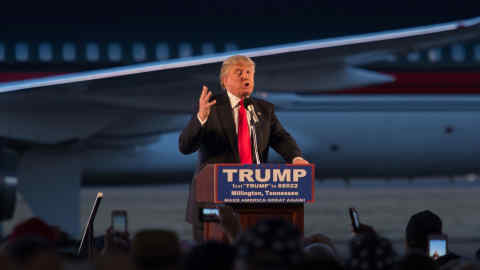 Mr Cruz and Mr Rubio joined forces last Thursday with an effective pincer attack on Mr Trump during the Republican presidential debate. After a couple of days in the shadows as Mr Rubio and Mr Trump stole the limelight by slinging insults at each other, Mr Cruz emerged on Sunday to attack the New York tycoon who has come under pressure to release his tax returns following the assertion by Mitt Romney, the 2012 GOP nominee, that they may contain a “bombshell”.

As he continues his attacks on Mr Trump, whom he accuses of being a fake conservative, Mr Cruz is leaving nothing to chance on the trail. While Mr Trump and Mr Rubio spend the next two days in other states, Mr Cruz is focusing on Texas. He received a boost last week when he won the endorsement of Greg Abbott, the Texas governor, who last year made headlines for ordering the State Guard to monitor military exercises by the Pentagon amid conspiracy theories that President Barack Obama was going to invade the state.

Video: Donald Trump and the future of the US

While Mr Trump has been pilloried by Mr Cruz for his “New York values” and for changing his stance on abortion and making donations to Democrats in the past, he has had surprising support from evangelicals, a crucial demographic in Texas and several other Super Tuesday states, including Georgia, Alabama and Arkansas.

In South Carolina, where Mr Cruz had hoped to do better, Mr Trump beat him among white evangelical Christians by 34 per cent to 21 per cent, while in Nevada the margin was 41-27. Analysts say that Mr Cruz does not have a viable path to the nomination if he cannot do well in Texas and the southern states where his supposed natural constituency of religious conservatives is more influential than in later-voting states.

That Mr Trump — a twice-divorced New Yorker — has so far managed to carry that group, speaks to the widespread disillusionment with Washington politicians among conservative voters, a frustration that Mr Trump has managed to tap into.

“There are certain evangelicals who are willing to say ‘I’ll hold my nose and vote for Trump because I think he can be the leader for us at this point in our life’,” said Richard Davis, a South Carolina lobbyist. “Evangelicals and a majority of voters have the same sort of feeling about the country, which is that the status quo is just not working.”

Scott Huffmon, a political-science professor at Winthrop University in South Carolina, said Mr Trump appealed to white people with lower levels of education “who feel like they’ve lost influence and are being looked down on by educated elites” — the same group that until recently dismissed the possibility of the tycoon winning the nomination. “They feel pandered to every four years and then ignored,” said Mr Huffmon.

White House Countdown: Sign up for our daily US election email