Mastery at Maison Margiela, and a riddle at new-look Lanvin: AW19 show reports

John Galliano did pared-down perfection, and another new name at Lanvin

There was some masterful tailoring at Maison Margiela, where John Galliano and his atelier delivered a pared-down collection of gender-fluid clothing so skilful in execution it spoke for itself. It’s clearly the season of bold tailoring — and here, as elsewhere, the shoulder was key. For this collection it was slightly puffed, before dropping down into an elongated sleeve, or it was dropped to create a smooth line that fell from the neck like a cape, or it rose into two angular peaks on either side of the frame. It was great whichever way you cut it.

After the crazy graffiti prints of Margiela’s couture show in January, one might have expected this collection to have gone the same way. But no. After the “digital decadence of couture week”, read the show notes, this was an essay in “restraint” where familiar clothes were reduced to their “most authentic form”, and fabricated in workmanlike materials such as flannel, Harris tweed and herringbone. This ready-to-wear collection featured impeccable garments, and exquisite outerwear so arresting I barely noticed whether there was a man or woman inside. Not that that should matter — as my daughter keeps reminding me: “Stop being so gendered about everything.” In past collections, the men in womenswear have seemed costume-y; here, it was more matter of fact.

Deconstructed, genderless clothes might not suggest a powerful business but Maison Margiela is doing very well. Natalie Kingham, the fashion and buying director at matchesfashion.com, says that Margiela sales are very strong: “There’s a customer who loves the Margiela heritage, but the fact is the clothes are really good.” The more prestigious of the fashion houses that fall under the umbrella of Diesel founder Renzo Rosso’s group Only The Brave, Maison Margiela is posting steady growth. And expanding. Last year, the house launched a perfume, and the accessories lines goes from strength to strength. This catwalk, however, was a great reminder that Rosso’s best investment was in hiring John Galliano. Of course, there are those who still have misgivings about his past anti-Semitic behaviour, and whether his subsequent stint in rehab adequately served his crime. But throughout his determined service at Margiela, he has quietly re-established his place as one of the great designers of our times.

Maison Margiela is a brand built on anonymity, a collective point of view, recycling and deconstructing. Despite its different ownerships, the house has retained some semblance of its original point of view. Would that every brand were so straightforward. Founded in 1889, Lanvin can claim to be the oldest continuously operating couture house in France, but in recent years it has cycled through so many designers, executive upheavals — the business was sold last August to the Chinese group Fosun International for €120m — and “visions” that I’ve no idea what it stands for any more.

Could Bruno Sialelli change that? In his first show for the house since being appointed artistic director last month, the 31-year-old French designer introduced a whole new brand concept for Lanvin. And it looked a lot like Loewe. Perhaps that shouldn’t have come as a surprise considering that until six months ago Sialelli was employed by the LVMH-owned house, but it was still a little shocking to see so many Loewe signatures — the silk hem inserts, the crafty knitwear, the droopy layering and casual tailoring — also represented here.

Still, Sialelli had his own explanation for the themes of his first show. Many derived from the archive and the legend of Jeanne Lanvin, the couturier and brand founder whom Sialelli argued created a “lifestyle brand” in an era before such a thing existed. “She did men’s collections, women’s collections, fragrance and travel wear. She herself was a great adventurer and I wanted to incorporate that spirit in my vision for the brand.”

Hence, the “Aztec pilgrim” knitwear and chequered blankets were a comment on her travels to South America. The St George scarf prints and silks were inspired by the founder’s love of the folkloric and her medieval-inspired designs. A few looks, arguably the strongest, were cast in the house’s famous blue. And a new logo, “JL”, was woven into knitwear — which seemed an odd bit of rebranding for a house whose existing logo, Paul Iribe’s “La femme et l’enfant” (1924), based on a 1907 image of Jeanne Lanvin and her daughter in matching outfits, is one of the most touching, arresting and potentially lucrative of them all. It was in evidence here, on some monogrammed pyjamas, and stamped on some muslin, but as a bit of crafty brand messaging it felt strangely underemployed.

In the age of corporate luxury, heritage houses increasingly cling to their founder narratives as a way to make them more sincere. It gives them a sense of perspective, and evokes some kind of continuity around the brand. But who are we kidding? Jeanne Lanvin was undoubtedly an extraordinary figure of her time. But this Lanvin is no older than my breakfast. As stories go, it’s going to need a few more chapters before I’m totally drawn in. 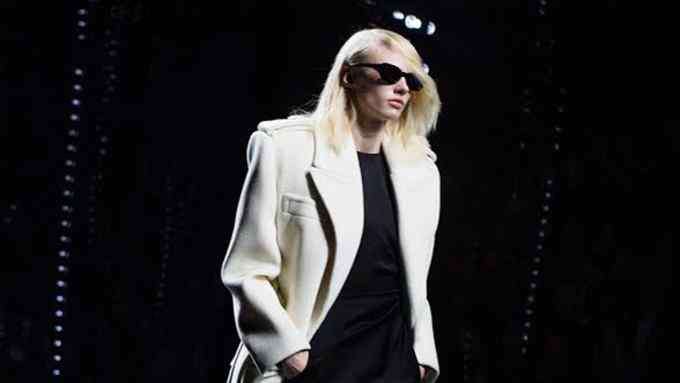