The pre-owned watch platform bets on the rise of independent brands and the appeal of physical stores, as it tours the world with more than 100 timepieces

Decades before François-Paul Journe and Denis Flageollet became stars of independent watchmaking, the men behind the FP Journe and De Bethune brands worked side-by-side at Techniques Horlogères Appliquées, a third-party movement maker that created complications for the likes of Cartier and Breguet.

And this fact, plus other lesser-known watch trivia, are what horology fans will be sinking their teeth into this weekend, thanks to a travelling retrospective of the two watchmakers.

Organised by the Philadelphia-based, pre-owned watch platform WatchBox, the selling exhibition, titled Two Decades of Complexity & Beauty — the Pivotal Collections by FP Journe and De Bethune, started in Zurich last week. It will move to Geneva today until November 7, and then head to cities in Asia, the US and later Dubai. As well as showcasing more than 100 important models by the watchmakers, the exhibition will also include various events, panels and educational talks.

WatchBox — which was co-founded five years ago by Danny Govberg, a fourth-generation jeweller who also runs the watch and jewellery retailer Govberg Jewelers with his sons — now operates both as a selling platform and as an educational hub. The site produces more than 30 videos a week, including hands-on watch reviews, collector profiles, and a live show every Monday with the watch expert Tim Mosso — whose quirky, rapid-fire presenting style has made him something of an industry guru.

WatchBox also features on the Chinese Twitter-like Weibo and the video-sharing site Bilibili, for its customers in Hong Kong and Singapore.

In November last year, WatchBox raised $165mn in equity capital, with new investors joining a star-studded roster that notably includes the professional basketball players Michael Jordan and Giannis Antetokounmpo, all of whom have helped raise WatchBox’s profile. The investment will be used in part to fund a global expansion plan that involves entering the bricks and mortar space, in what WatchBox calls Collector Lounges or Houses — billed by the company as “Audemars Piguet House meets Soho House”. The typical WatchBox client is a collector who owns on average three watches, with the company saying there is “substantial increases in activity” in the $50,000 and $100,000 price categories.

The company plans to have a total of 14 houses in the places such as New York, West Hollywood and Tokyo, to complement those in Dubai and Zurich. Another site in London is expected to open in Mayfair next year. “The idea is to tie all these watchmaking communities,” says Justin Reis, WatchBox’s co-founder and chief executive.

For diehard watch fans, however, WatchBox’s most headline-grabbing announcement was arguably the majority stake it took in independent watchmaker De Bethune last year. Chief executive Pierre Jacques, who remains on De Bethune’s board with COO and master watchmaker Denis Flageollet, called the acquisition a strategic decision. “The world changed during the pandemic, and we need new channels and new ways to give the same experience to our customers,” he says.

Jacques points out that a De Bethune watch is rarely a buyer’s first watch, but 80 per cent of his WatchBox customers are already watch collectors.

To De Bethune, then, WatchBox offers a valuable database of aficionados and clearly understands its business — but is not expected to interfere with the watchmaker’s independence, creativity and innovation. “You want a partnership with someone who knows your core business and shares your core value — and who can also help to be better in certain fields that you’re not,” says Jacques. “It’s l’union fait la force [unity makes strength].”

Rob Corder, co-founder of industry publication WatchPro, says the rise of both independent makers and WatchBox are not unrelated. “Danny [Govberg] is a massive fan of the right type of independent watchmaker,” he says — so much so that WatchBox holds a sizeable inventory of pre-owned watches, notably pieces by both brands in its exhibition. “He understands the power of scarcity in the luxury space [and] he’s absolutely backed it to the hilt.” Corder adds that being a huge content creator can “move the market somewhat, just through the publicity, let alone the fact that it’s bought up a lot of stock”.

The De Bethune tie-up also signals the changing face of the pre-owned market.

“I don’t think that a secondary market entity is in any way pejorative anymore,” says Corder. “This is a very successful, sophisticated company, that’s as far away as you can get from backstreet traders in their dodgy mackintoshes.”

In the secondary market, De Bethune watches are currently trading at over 40 to 60 per cent their retail prices for its most distinct models, according to WatchBox, which expects the partnership to add confidence and act as an endorsement for the brand in both the primary and secondary markets. Reis says it would be “a great result” if De Bethune’s annual production of 230 watches can double in the next five years.

Pumping money into media, content and, now, this series of education events is all in the same vein. “It’s to give consumers confidence that it’s something that we really believe in,” says Reis.

This article has been amended to correctly reflect the prices at which De Bethune watches are trading for in the secondary market. 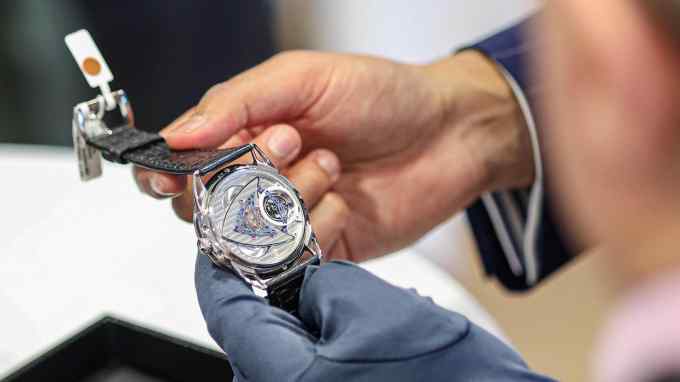