Number refinancing is the highest for nearly 10 years

We’ll send you a myFT Daily Digest email rounding up the latest Mortgages news every morning.

Remortgaging activity has surged to a near-decade high as Britain’s homeowners rush to lock into low-rate loans amid uncertainty over Brexit.

Jackie Bennett, director of mortgages at UK Finance, said: “Remortgaging has reached its highest level in almost a decade, as homeowners take advantage of a competitive market and lock into attractive deals. This also reflects the large number of fixed-rate mortgages coming to an end, which is expected to continue into 2019.”

The remortgage market has grown sharply in recent years, filling a gap for lenders left by a dwindling appetite for new loans for home purchase in a cooling housing market. The prospect of rising interest rates, flagged by the Bank of England, has encouraged people to sign up to new fixed-rate mortgages or other discounted rate deals.

Cuts to interest rates on fixed-rate deals are the main battleground for mortgage providers. Aaron Strutt, mortgage broker at Trinity Financial, said: “The lenders we speak to are still very focused on competing to offer the cheapest rates. Despite the Brexit turmoil, that hasn’t really changed.” 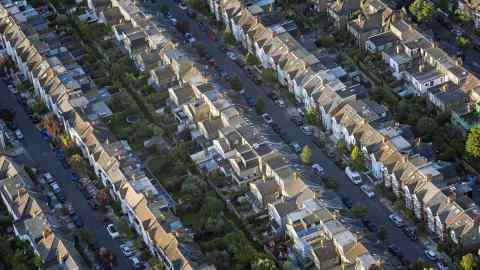 Andrew Montlake, director at mortgage broker Coreco, said lenders were offering “Christmas cracker” deals a little earlier than usual this year, as they were keen to make up for the shortfall in the purchase market to hit their lending targets. These efforts to win customers via attractive deals are set to continue into the new year, he said. “Rates are going to have to be competitive from a lot of lenders to try and make inroads.”

Remortgaging activity is driven not only by seductive rates but by the life cycle of current fixed-rate deals. A surge in two-year fixed-rate deals signed in 2016, for instance, produced a commensurate boost in remortgaging around the middle of 2018, as the fixed-rate periods came to an end. A further spike is expected between April and June next year, according to UK Finance.

Such waves of remortgaging are likely to become less pronounced in future, however, as more people are now spurning two-year deals to take up longer-term fixes of three or five years, partly because the cost of fixing for longer has dwindled in recent years.

“Nearly half of all the fixed-rate lending so far this year has been for five years or more, compared to less than 30 per cent two years ago when the clear preference was still the two-year fix,” said James Tatch of UK Finance in a note published earlier this year.

For those seeking maximum reassurance in the face of political uncertainty, lenders have also been trimming rates on 10-year fixes. TSB, for instance, has a 2.39 per cent 10-year fix for those with a 40 per cent deposit carrying a £995 fee. “Even though the rate is higher than the cheapest short-term mortgages, the long-term payment security is appealing to many borrowers,” said Mr Strutt.