Union Pacific gallery — ‘We couldn’t do without art fairs’

For Nigel Dunkley and Grace Schofield, founders of London’s six-year-old Union Pacific gallery, being accepted into Art Basel’s 2020 edition was “one of those moments in life when it feels like all your hard work has paid off”, Schofield says. Since then they have had to adapt to the fair’s initial postponement until September and then, just last week, the cancellation of any real-life showing until 2021, as forced by the Covid-19 crisis.

In its place next week is the second iteration of Art Basel’s Online Viewing Rooms and both Dunkley and Schofield can see the silver linings. “We had been accepted to the Statements section, which meant we could only bring one artist, and that’s always a huge financial risk at a physical art fair, even before today’s added pressures. Now that the fair is online, we can bring up to three artists, with no [participation] fee, and hopefully as a place holder for a physical presentation down the line, which is less risky as a young gallery,” Dunkley says.

Anchoring Union Pacific’s virtual booth will be the French sculptor Caroline Mesquita, who had been due to show at the real-life fair. Her individually crafted metal handbags will be on view alongside works by two other female artists: Urara Tsuchiya, a Japanese ceramicist who proved a highlight of Frieze London last year, and the San Francisco-based painter, Koak. Prices range from €4,000 to €10,000.

As for many, the Covid-19 crisis has forced the gallery’s founders to work very remotely — Dunkley is now working from a house he is renovating in Umbria while Schofield lives a 40-minute walk away from the gallery’s east London space. But they are taking the uncertainties in their stride. When we speak via Zoom, Schofield has paintings by another Japanese artist — Ulala Imai — on her walls, as her apartment has become an extension of the gallery show that opened briefly in March.

The pair have recent memories of getting through tough times. “We opened at the wrong moment, in 2014,” Dunkley says. At first, he remembers, it was relatively easy to sell works by the already in-vogue abstract German artist Max Ruf. Then, the risk-taking, speculative heat went out of the art market and Union Pacific experienced “painful teething problems”, he says. Both confess there were times they considered throwing in the towel.

“We had a couple of zero fairs,” Dunkley says, meaning that they made no sales. The turning point for the gallery was another art fair, however — Paris Internationale, a hip, alternative event that launched in October 2015 with Union Pacific as one of its 34 inaugural exhibitors. “We became part of a young, cool scene, met like-minded galleries, made sales and realised that we might not actually be so bad at this,” Schofield says.

Both had some commercial experience before they set up Union Pacific. Dunkley had worked at Carlos Ishikawa gallery, another east London darling, and Schofield at the mega Gagosian gallery. They met, however, while running non-commercial projects in Peckham when the area of south London began to experience a surge of creativity.

“We curated a show and found we worked well together. We had a similar network of friends and similar taste and both wanted to catalyse something new,” Dunkley says. Both had also trained as artists in London — Dunkley studied sculpture at Goldsmiths; Schofield specialised in video and performance at Chelsea College of Arts. Now, they say, they have a similar style of working.

“We had to work it out from the beginning without a rule book or anyone to manage us, so there have been tough moments of negotiation and adjustment along the way, but it has strengthened us both . . . It seems really impossible for us to be able to do this job alone now,” Schofield says.

Art fairs remain of tremendous significance to them. “Perhaps a bigger gallery can look back and say that they don’t need fairs any more, but while I’d like to do fewer and focus on those in Europe — mostly for ecological reasons — we couldn’t do without them,” Schofield says. Dunkley agrees. “Some of the longest hours of your life can be standing at an art fair but if you are at Liste during Art Basel, in terms of the people you meet, it is incredible — we would do it for a whole other week,” he says, recalling that we met at that very fair in 2018.

They are hopeful that the current crisis won’t stop such events altogether. “Perhaps in the short term, if we are socially distanced, it will be easier to speak to everyone you want to on your booth,” Schofield says, her optimism shining through the three-way Zoom connection.

In the meantime, the virtual views are much better than nothing. Their only major concern is that it is “difficult for the artists to make works for presentations that won’t get physical visibility, which is sad to see”, Dunkley says. This, he adds, is another reason why being able to show more than one artist at an online fair is key. “You can’t really ask your artists for an entire body of work,” he says.

For their next gallery exhibition, an online-only group show that will run in July, some of their artists have responded directly to the challenges of the format by exploring digital art for the first time. The gallery’s digital walk-throughs on Vimeo, produced by one of their Peckham friends, Oliver Hogan at Opus studio, are eye-catching and entertaining (most recently including the familiar private-view beer bucket).

After this, Schofield says, they have “an exciting year coming up”, with solo shows planned for Aks Misyuta plus two artists the gallery doesn’t officially represent — Martin Soto Climent and Agnieszka Polska. “Doing a show is a nice way to go on a date with artists, to work out if we have chemistry,” Dunkley says. Their ambition is to keep growing, though they are under no illusions that this now may not happen as quickly as planned. As Schofield puts it: “We’ve had a few decent years but this year everyone in the world is taking a moment, including us. It’s not a race.”

READ MOREMarc Spiegler
Art Basel’s Marc Spiegler: ‘The future of the art world is not digital’ 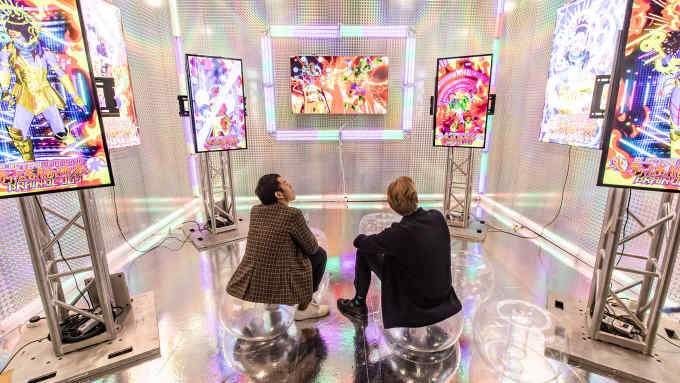