Lead the way with 50% off
UK trade

Trade deal with US could lower standards, manufacturers warn

Sign up to myFT Daily Digest to be the first to know about UK trade news.

British manufacturers have raised fears the UK will be flooded with cheap, poorer quality goods if Washington forces companies to submit to US standards as part of the negotiations on a US-UK trade deal.

The industry has begun lobbying ministers over their concerns that British companies will end up carrying the costs of two separate systems or risk giving up “the UK’s sovereign control of its own regulation”.

In a letter seen by the Financial Times, Greg Hands, the minister for trade policy, was warned by business chiefs that “competition with US companies flooding the market with lower standard goods will only have the effect of reducing further the domestic base”.

The letter has been signed by the British Standards Institution, the national standards body, Make UK, which represents the UK’s manufacturers, and the British Chambers of Commerce.

The letter was sent as Liz Truss, international trade secretary, told MPs on Wednesday that the UK will not lower its standards in order to strike quick deals before the Brexit transition period concludes at the end of 2020.

“To coin a once familiar phrase, no deal is better than a bad deal,” she said in a reference to the maxim of former prime minister Theresa May. 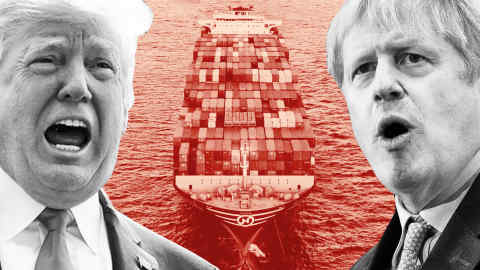 But manufacturers remain concerned at what might be surrendered by the UK in any future deal with Washington. If US standards replace existing British standards, the letter says, there is the potential “to permit US businesses to bring legal challenges against the prioritising of UK standards in critical areas such as the safety of PPE [personal protective equipment] or children’s toys”.

The letter added that a weakened domestic industry would make it hard to build a stronger export share of the market — a key ambition among British companies as the UK leaves the EU.

In response, a spokesperson from the Department for International Trade said: “The claims by the BSI are utter speculation. UK regulation is a matter for the UK government".

The business groups warn that there is a risk — as seen with trade deals with Canada and Mexico — that the US “will take an aggressive and possibly litigious approach to ensuring that we recognise US standards”.

Manufacturers will then face the cost of managing two separate production lines, it said.

“The US are insisting that we sign up to their standards but then they will use the courts to make their standards a priority over our own,” said Stephen Phipson, head of Make UK. “That gives them a competitive advantage.”

The calls mirror those from parts of the food industry, which has called on the government to rule out US meat reared using hormones or growth promoters, and poultry washed in chlorine to kill bacteria.

Waitrose, the supermarket chain, on Thursday said that it supported calls to “include legislative provisions that enable [the government] to safeguard standards”. It also said that it would “never sell any Waitrose product” that does not meet its own standards, irrespective of what a future trade deal might allow.

Tesco chief executive Dave Lewis told a Financial Times conference last year that company would not “give up our standards” on foods.

UK manufacturers typically use international standards but the US has drawn up a different set of rules, and these can vary, depending on the state.

Maurizio Bragagni, chief executive of Tratos UK, a Merseyside-based cable maker, said his business faced problems in the past from trying to sell products based on international standards to the US. “They use standards as a barrier,” he said. “We think we are playing English football but it turns out to be American.”

He also pointed to the danger of allowing US manufacturers to sell to the UK using their standards: “The UK has one of the highest national standards for toys,” he said as an example. “The US has a totally different and cheaper set of regulations — and the cheapest product always wins.”