When PlayNext Lab, a Tokyo-based technology start-up, made a hiring push last year, it took the unusual step of targeting women with young children.

The move followed several failed attempts to hire applicants, all male, who were lured away before the interview phase by bigger, better-known rivals. Leading recruitment agencies did not bother to engage with a company of only 60 employees.

PlayNext, which develops mobile applications and games, had faced a similar challenge when it set up four years ago.

The solution then was to hire engineers from overseas, who now account for 80 per cent of its workforce, in a country where the debate to allow immigration to make up for its declining population has just begun.

This time, the company recruited two women who wanted to pursue careers but who also faced constraints on their working hours because of family calls on their time.

“We felt we could win [against other employers] because there are many Japanese companies that avoid women who cannot work long hours,” says Shinichi Ide, an executive at PlayNext.

An acute labour shortage, with an unemployment rate that fell to just 2.2 per cent in December, and a rapidly ageing society are forcing companies to revamp working practices, including a stricter cap on overtime hours. 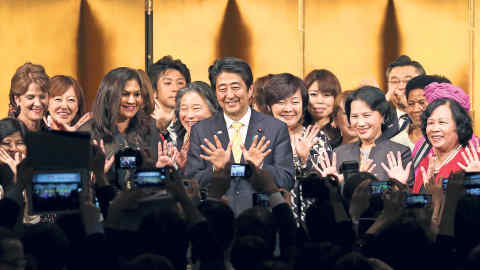 Female workers in Japan have long constituted an underutilised pool of talent. The lack of day care facilities and caregivers, as well as cultural stereotypes that place a bigger workload on mothers, have forced many women to lower their ambitions. Nearly half quit their jobs after having their first child.

Japanese female participation has reached a record high of 71 per cent — higher than in the US and Europe — while the ratio of jobs on offer to applicants was at 1.60 in 2019, the highest level since the early 1970s.

The key challenge for policymakers remains to increase the ratio of working women who are engaged in full-time jobs. Lower-earning, part-time roles still account for 56 per cent of jobs taken by women, says the government. 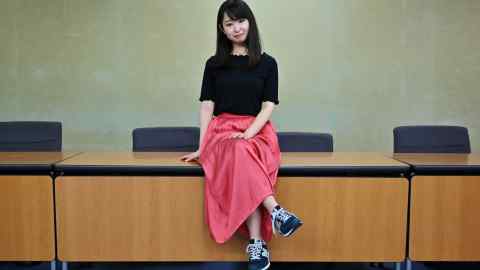 When 28-year-old Shoko Awamura returned to work at a property developer after the birth of her second child in 2018, she quickly realised that her prospects for holding a managerial position were remote because of the constraints she faced on working after 5pm. “The biggest reason why I changed jobs was because I wanted to build my career even as I raised my children,” Ms Awamura says.

After looking for another job, she recently joined Tokyo-based real estate start-up Renoveru, working 8am to 5pm. The best-performing employee in her department is a woman who never works extra hours or during the weekend, she says: “I found a role model that I should aim for.”

The new job came through a recruitment service that focuses on working women with young children who cannot work long hours.

Yodai Sakai, general manager at ecommerce-to-recruitment group BBO, which has provided the women-focused service for nearly a year, says many female applicants are willing to move from a big employer to a start-up if it might lead to better career prospects.

Japan has one of the most generous parental leave benefits in the world, with workers enjoying the option of extending their one year leave for six months if they cannot find childcare. But that often means the women do not regain their position or fall off the company’s career ladder when they return.

“Some of these women find themselves moved to a completely different department and their pay gets dropped to an entry level position due to shorter working hours,” Mr Sakai says. “They see little prospect of expanding their career and choose to change jobs.”

One of BBO’s own staff, Kaori Tanaka, quit her accounting job at a big listed Japanese company after getting married, and was hired by the agency shortly after the birth of her first child.

“A start-up was perfect for me because you basically had to do everything on your own,” the 36-year-old says, explaining that she enjoys the chance to take more responsibility.

Finding new, more family-friendly jobs remains a challenge, she adds, “but once you go out and seek information, there are job opportunities out there”.