Every night at 6.30, Tony rides his bicycle to Northumberland Street and performs one of the rituals central to maintaining peace in Belfast. He pushes a pair of 10ft-high metal gates shut, closing off the crossway that connects the Catholic Falls Road and the Protestant Shankill Road neighbourhoods.

His duty completed, Tony retires to his security patrol in the industrial park nearby, just as he’s done for nearly two decades. Behind him he leaves a 100-square-yard patch of concrete — walled in on every side, shut down every night. This is no man’s land in Belfast.

The next morning, the gates reopen, and life returns. Paul Doran and Mark Ervine pull up in a red Volkswagen Polo hatchback and unload a ladder, paint and brushes. They are completing their latest mural this week, and although the temperature is dropping towards freezing and bits of snow are blowing, it’s not raining, so it’s painting weather.

The painters have chalked out a grid to work from, using the photos they have printed, folded and put in their pockets. As they work, they laugh. Paul, the apprentice muralist from a family with ties to the Provisional Irish Republican Army, backtracks to his Falls Road side for a beer run. He makes his selection carefully, settling on an eight-pack of Harp Lager (passing over Guinness, an Irish beer) to avoid offending Mark, his mentor on the wall. To keep the peace in no man’s land, Paul needs to tread carefully. His collaborator is an ardent Protestant, loyal to the British.

As they open the beers, Mark is in his element — a paint brush in his right hand, a beer can in his left. The inspiration flows, and he becomes a showman, entertaining the tourists and journalists who come to ask when the walls will come down. Mark loves it. His eyes widen as he jokes. He woos admirers with the message of his art, telling them it’s anti-capitalist, anti-globalist, for the people — the people of any community.

With a paint-stained track jacket, a week of stubble, and beer-and-smoke-scented breath, he could pass for any Belfast grafter. But Paul plays the hype man. He reveals that Mark is one of the most famed muralists of Northern Ireland. The Mark Ervine. The guy who has painted on both sides of the walls, who collaborated with ex-IRA man Danny D. Google him — it’s fuckin’ mad.

Usually, muralists must request permission from the local community before painting, but since this land doesn’t belong to either side, Mark’s reputation gives them licence to create in the void. No one gives them trouble when they learn that Mark Ervine’s on the wall. Paul says they are the first to paint between these gates.

It wasn’t an unusual thing. In Northern Ireland, more people have died from suicide during 20 years of peace than were killed by all the riots, bombs and shootings of 30 years of conflict. In 2017, someone committed suicide nearly every day.

“The transition to peace means that cultures of externalised aggression are no longer socially approved or politically acceptable,” writes Michael Tomlinson, a professor of sociology at Queen’s University in Belfast. “Violence and aggression have become more internalised instead.”

The UK-based Mental Health Foundation has called the suicide rate “catastrophic” and experts are searching for explanations.

What is clear is that a startling number of people in Northern Ireland are suffering trauma. Of the 28 countries surveyed by the World Mental Health initiative, Northern Ireland has the highest rate of post-traumatic stress disorder. In fact, since 1998, the year of the Good Friday Agreement, Northern Ireland’s suicide rate saw a dramatic rise: it doubled in just 10 years. Tomlinson discovered an unusually high rate of suicide in men who grew up during the conflict, men who are now increasingly isolated and without any outlet for their trauma. The war has turned within.

On St Patrick’s Day, Paul meets his dad and mates for a pint. Mark, like most Protestants trying to avoid trouble, stays home most of the day.

Alone, he’s painting a canvas in his home in the upper Shankill, where Belfast’s working-class Protestants live in rows of identical, terraced houses. “We all go under the mantle of working class,” he says, “but nobody has a fucking job.”

The sun is making an appearance, but a thin curtain keeps direct light out of Mark’s living room studio. He complains of the lighting, saying he can’t see colours properly. “Usually our sunshine comes in liquid form,” he says. On the black leather ottoman is a brochure with a photo of a man, arms outstretched to a sunrise. “Stauros — Recovery in Christ” reads the text above. Next to the brochure is a half-ounce of weed in a plastic container, three wood files, a measuring tape and a bong.

Mark just moved into the place in September, and hasn’t had a chance to set anything up. But he has managed to hang three works of art — a triptych of abstract Expressionist pieces painted by his three daughters. He’s even mounted a lamp above the canvases to display them properly. There are also two framed pieces that lean against a wall. They are classics of middle-school art, parrots in pastel. His son drew them, Mark says, before he was killed.

He takes a puff of his ever-present electronic cigarette, a swig of his third beer of the morning and turns back to his canvas. It’s a swirl of pinks and purples and blues created by mixing acrylic with water and layering paint while it’s still wet.

He still asks why his son is gone. It seemed to come out of nowhere. Mark’s wife found him dead in his room. It didn’t make sense. They’d made plans for the next few days.

In 1998, the global community heralded peace in Northern Ireland; President Bill Clinton, promises of foreign investment, and the potential for tourism all spurred the agreement forward; and they gave the Nobel Peace Prize to its architects. But this all came at a cost, for the past had to be swept aside. No shared memorial for the victims of the Troubles was commissioned; a meaningful truth and reconciliation process never happened; and the walls just kept getting taller.

The first walls were built by the British army in 1969 after an initial spate of riots in reaction to a Catholic-civil-rights movement. The army intended for them to last six months, fearing the unwitting creation of another Berlin Wall. But even peace hasn’t slowed construction.

Today, there are 21 miles of walls that interrupt the geography of Northern Ireland. The crown jewel is the Cupar Way Peace Wall that runs for half-a-mile and stands 44ft tall. “What started off as a short-term method of policing has actually become a modern-day, physical segregation and apartheid,” O’Donnell says. But many people see them as necessary to maintaining peace. They prevent street brawls and rioting, as well as providing residents with a sense of protection and stability. Widespread sectarian violence hasn’t broken out in years, but the very things that prevent war — the walls — also thwart peace. It raises the question: is peace merely the absence of violence?

Sunday is the day to complete the mural, and Paul leaves at 8am to pick up Mark. A television crew will be filming them for a special about walls in China, Korea, and Palestine, and for the occasion Paul just got a fresh “bap chap” at The Chop Shop Hair in the city centre. With a trimmed beard and close-cut sides, he could pass for a hipster.

After a masters in creative practice from Liverpool Hope University, Paul is gaining praise as a studio painter. He has discovered one of Belfast’s selling points — a history of violence that can be mined for authenticity. Today, some of Belfast’s main tourist attractions are the walls themselves. Taxi drivers run tours, charming visitors with tales of the old days.

But while their mural collaboration gives Paul’s work the edginess he needs for his career, he’s wary of being sucked into Mark’s past. “Yeah, Mark’s got that PTSD — the shit he’s been through, it’s some heavy stuff. And if I go up there, he’ll want to sit and drink all day.”

Nonetheless, Paul drives his car up the Shankill Road, passing the British flags and the Shankill Gospel Hall with its sign that asks, “What Think Ye of Christ?”

As he pulls up to Mark’s townhouse, Paul looks to see if the neighbours are watching. He knows Mark, so everything should be all right. They load a ladder and other supplies into Paul’s car and head to the wall. Back in no man’s land, figures emerge on the mural: a monochrome policeman in riot gear holds chains that bind two children. The boy and girl hold signs that read, “Global Commodity” and “Free Range Slave”. It’s a haunting addition to Mark’s oeuvre, set against the black-painted bricks of no man’s land. Paul wants to write something anti-Brexit on the wall, but like many loyalists, Mark is not entirely negative on the subject. So it, like so much in Belfast, remains unspoken.

The writer is one of the runners-up in the 2018 Bodley Head/FT essay competition. The winner will be announced December 2018 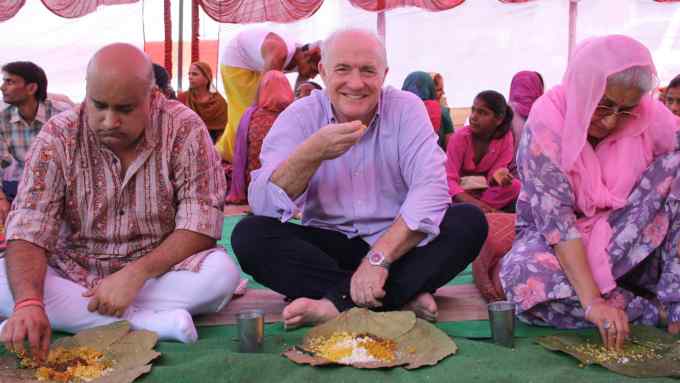