From a flipping good new folding phone to hair straighteners, it’s the small things that count

On the Flip side…
Back in January, I featured the Samsung Galaxy Fold, one of the first phones to successfully incorporate a flexible screen. It was a stroke of engineering genius and, as it unfolded vertically into a large square, the best device for taking Instagram photos. The Fold isn’t catching on, but this variation on the theme may be the real game-changer. The Galaxy Z Flip is a small square that unfolds into a traditional tall, thin phone with a 6.7-inch screen. Vodafone, which sent me my sample, is going big on it and clearly senses it may be the future. The innards of the phone itself are no different from a very nice standard Samsung Android. But the Flip is all about the ergonomics and aesthetics. It handles like your grandfather’s precious silver cigarette case. And it’s the combination of shape, quality and utility – the way it fits a jeans pocket or lives nicely in a handbag – that gives the Flip its desirability-plus factor. You can easily open it with one hand, the Amoled screen is superb despite the fold across the centre, indications are that the folding mechanism is durable – and there’s no need to buy an extra case to protect it from smashing. Samsung Galaxy Z Flip, £1,300

Straight to the top
For (hopefully obvious) reasons, I didn’t personally test this new product from Dyson. A friend did. And she’s in love with its hair-straightening irons, which make the pricey offerings from the gold standard, GHD, seem like a bargain by comparison. Is the Dyson Corrale really that many pounds sterling better than a GHD? Seems so. Its killer feature? It can operate cordlessly for 30 minutes. It is infinitely more easy to wield, says my tester, than regular devices with a mains lead. Corrale also has an aircraft mode, meaning it’s safe to put it in hold baggage even though it has lithium batteries. Oh, and after seven years of R&D, Dyson claims that its flexible plates are 50 per cent less damaging to hair than rivals’. Dyson Corrale, £399

The WFH keyboard you’ve been looking for
One of the essentials of the year of WFH has been a really good standalone keyboard to go with the MacBook you had to scuttle home with in March. One option is, of course, the standard Apple Magic Keyboard, but, for me, it’s always felt too insubstantial to hammer at all day. Logitech specialises in computer accessories that are better, albeit uglier, than Apple’s own peripherals. I have written previously about its fantastic MX Master mice. But now it also has the rather magnificent Logitech MX Keys for Mac keyboard – and it’s been a revelation. There is an Apple equivalent, the £129 Magic Keyboard with Numeric Keypad, but I vastly prefer this. For one thing, it’s more than twice as heavy – which for key-hammering purposes is an extremely good thing. For another, its keys have a deep indent on the surface, like old-school typewriter keys, which suit my chimpanzee typing style far better. Logitech MX Keys for Mac, £100

Genius in-ear phones tailored to your hearing
Three years ago, a Melbourne start-up became a global success with Nuraphone. Its genius was that it could tailor its sound to suit the individual's hearing. Nura wasn’t quite the first brand to do it, but it did it better. The product had an over-ear design with an internal in-ear insert that wasn’t that comfortable, but the sound was unbelievable, like a live gig. Nura already had engineers working on a wholly in-ear version, which seemed about as achievable as a pocket-sized hippopotamus. But they’ve done it. The result has slightly clunky bendy bits around your ears and a wire behind your neck, but once in place, the NuraLoop is comfortable. And the sound is remarkable for an in-ear device – I’d say 85 per cent of the live effect of its bulkier brother. NuraLoop, £199

Grandpad – a tablet for the tech-averse
Five years ago a Californian company came up with this ultra-simplified adapted Acer tablet for elderly parents and grandparents to do video calls, email, stream music and more. It came to Ireland last year, and now it’s in the UK. And it’s superb. Younger relatives have some digital ducking and diving to do to set the GrandPad up, but the interface the user sees is very clever and effective. Big on-screen buttons allow the user to select from Internet, Call, Email, Photos, Camera, Weather, Music, Games and more. Every vestige of over-technical language that tech manufacturers love has been avoided. I also love that GrandPad has a lifetime 4G connection so there’s no need for the user even to have internet. GrandPad, from £49.95 a month subscription

A doorbell that delivers
I like to work while playing loud music. But I also get a lot of deliveries and live alone, so can’t afford to miss the doorbell. A fancy new-wave bell like the hyper-successful Ring would be ideal; a vibrate on my Apple Watch would solve everything. But I share an entry system with other apartments and the building is listed, so English Heritage might take a view on excess external gadgetry. My WiFi also refuses to reach two floors down.

An afternoon’s Googling, however, revealed this German kit by Signolux, courtesy of Sarabec, a Middlesbrough firm specialising in gadgets for the hard of hearing. There’s a stick-on microphone for the door buzzer, which transmits a radio signal to a portable unit that flashes brightly when the buzzer buzzes. It’s simple and works superbly. It’s also triggered by the bark of a cockapoo (my son’s), but no other false alarms. The receiver module even comes in the shower room with me. Privacy fans may appreciate that Signolux is not internet-connected, so arguably more secure than others. Signolux Audio Universal Transmitter and Standard Receiver, £91

A neat digi-thermometer
What is the best domestic thermometer on the market? I was getting on rather well with a basic £22 digital model from one of the chain chemists, but it needs to be poked into one ear so, to meet 2020 hygiene standards, I have upgraded to the Thermo from Withings, the French gadgeteer that was making connected home-tech toys before they were popular. It takes its measurement from the temporal artery, where blood is at the same temperature as the core of the body. But Thermo doesn’t touch the skin – it reads from a centimetre away, using infrared sensors. The result appears lit up on the device, colour-coded to indicate whether it’s normal, elevated or high, and the data is all whooshed to the inevitable app, along with a suite of cloud analysis. Withings Thermo, £90

A compact camera to Leica
After about a minute of careful consideration, I decided this Leica was by so far the best compact camera I’ve seen that I bought one. But I am a Leica fanatic. With this, I now have four – although two are 1930s models. And I still have a space in my cupboard for the equally new M10-R with the 35mm Summilux lens, but that costs £11,450, so maybe not yet.

How To Spend It
Five essential feel-good gadgets 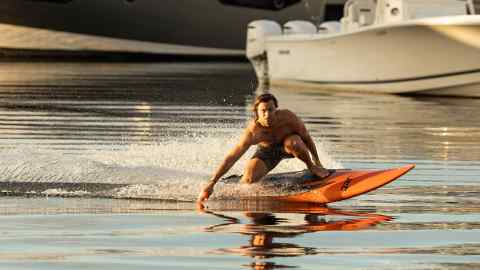 The D-Lux 7 has its own Vario-Summilux zoom lens and will fit into a reasonable-size coat pocket. But it’s the ergonomics of the D-Lux 7 that make me swoon. The clicky, manual, rotary controls are exactly where you want them to be and perform the precise functions you need. Closest to your right thumb, for example, where you want it, is the rotary knob you can spin around to add or subtract between half an exposure stop and three stops – meaning you can properly “bracket” your exposures to take home a variety of exposure options.

The only decision you need to take is whether to go for the silver or the black. I chose black. But the silver is also very beautiful. Leica D-Lux 7, £1,075