Till discovering this dish, I had not found a chicken salad I really liked

Till now, I have not found a chicken salad I really liked. But, these days, a chef has to respond to the market and the market wants a salad — not some incy-wincy starter but a pile of assorted greens, grains and proteins that takes care of the job of eating for a while. Some salads — Niçoise, for example — fit the bill but some seem an exercise in monotony.

Much as I love chicken, chicken salad fails to float my boat. In my apprentice days, a chicken salad meant diced meat bound with mayonnaise, celery and possibly apple — tasty but rather old school. On the other hand, I have too much respect for Caesar salad to adulterate it with bits of grilled chicken. Bang bang chicken, with sugar, peanuts and chilli, is too saccharine for my taste. Those who wish to revive coronation chicken, with its bizarre blend of curry and apricot jam, cannot, alas, count me among them.

It is often assumed that a chicken salad is made with leftovers — it certainly used to be. Some consider salmagundi a distinguished dish. But I suspect they threw the kitchen sink at it, chucking in remnants and hoping that a liberal sloshing of salad cream, anchovies, capers and mustard would carry the day.

For a chicken salad that is not built on the salmagundi principle, the meat should be poached not roasted: it will be moist, biddable and able to soak up flavours and wed itself to a bigger conceit. The salad here began somewhere in the middle of Italy with crisp slices of fennel and then migrated south to Sicily to pick up a few sweet little tomatoes. By the time I had finished I was in the souk, adding spices, apricots and salt lemons. It may not be a salmagundi but it is definitely a bit of a hybrid.

After poaching, I usually put the bones and carcass back in the pot for an hour’s more cooking and an excellent stock. The salad will be a good lunch for at least six. 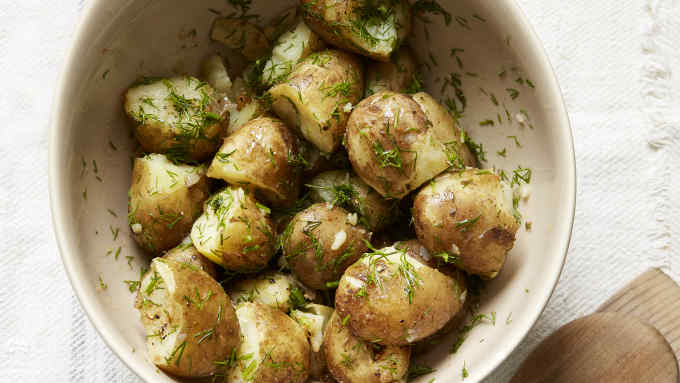