Business schools slow to practise what they teach on sustainability

When Darden School of Business set a bold target in 2010 to become carbon neutral within a decade, it resolved to take an unusually hands-on approach to reduce emissions.

“The easy way in trying to achieve neutrality is by buying offsets,” says Professor Michael Lenox, senior associate dean and author of an upcoming book on decarbonisation. “We decided we wanted to do something a little more action-oriented.”

The school and its parent, the University of Virginia, established a “power purchase agreement” with Dominion Energy, a local company, guaranteeing future payments for electricity generated without fossil fuels. The pledge allowed the company to fund the construction of the nearby Hollyfield solar plant, which opened in 2018 and provides all of the school’s — and a fifth of the university’s — power.

“Darden wanted to be a leader around how we live and how we learn,” says Prof Lenox. “This is an important issue for our students, and if we are teaching them sustainability, we should . . . practise what we preach.”

Such bold action remains highly unusual among business schools and other higher education institutions, even if many are recognising the need for greater contributions to tackling the climate crisis. When the FT surveyed some 160 leading business schools last year, less than one-third reported an objective to become carbon neutral. Just over a dozen had set deadlines of 2030 or earlier, while others gave target dates as distant as 2060.

There were exceptions. China Europe International Business School (Ceibs), in Shanghai, claims to be the first Asian school to have become carbon neutral in 2011, with a one-off programme that combined emission reductions, tree planting and purchasing carbon credits. Canada’s Gustavson School of Business, at the University of Victoria, achieved a similar goal around the same time and has since cut annual emissions by 30 per cent.

Basma Majerbi, associate professor of finance at Gustavson, says the initial impetus for action at her institution came from the provincial government. Lawmakers resolved in 2007 that all public organisations should become carbon neutral through either reductions in emissions or the payment of offsets.

But the achievement of that goal by 2010 highlights the many nuances around recording and cutting emissions. The school had to achieve net zero emissions defined under the Greenhouse Gas Protocol as Scope 1 (covering direct emissions) and Scope 2 (indirect emissions arising from electricity consumed). The costs were paid by the university.

Since then, with the help of its students, the school has been tackling the still more burdensome emissions classified as Scope 3. Those include waste, employee commuting and longer-distance travel by international students, guest speakers and faculty attending conferences or teaching and researching abroad.

“It was a very heated debate in the faculty council, and some people were not convinced of the means of buying offsets,” says Majerbi, who set her students the task of calculating emissions. They devised a methodology to separate university from business school activities, and to quantify faculty travel. “People at the beginning were a little hesitant in revealing everything they were doing. It was a bit sensitive.”

We’re teaching hundreds of students every year about sustainability and taking care of the planet. It would be hypocritical not to do anything about it ourselves

Yet since 2017 — retroactively applied from 2016 — Gustavson has estimated and published its full carbon footprint, with offsetting payments made to a range of organisations involved in cutting emissions, decarbonisation and related sustainable development goals. Each year, potential recipients are vetted and pitched by student teams and the winners selected by a campus-wide vote.

“We wanted to walk the talk as a school,” says Majerbi. “It’s really important for us. We’re sending hundreds of students every year all over the world and teaching them about sustainability and taking care of the planet. It would be hypocritical not to do anything about it ourselves.”

Many other schools argue it is unfair to judge them on carbon neutrality. The process is much easier to achieve, for example, with a new standalone building constructed to the latest environmental standards, supported by donor funding. Room for action is more constrained for those with limited resources on an older campus, and those based in more extreme environments. Demolition and reconstruction also carry a significant climate cost. 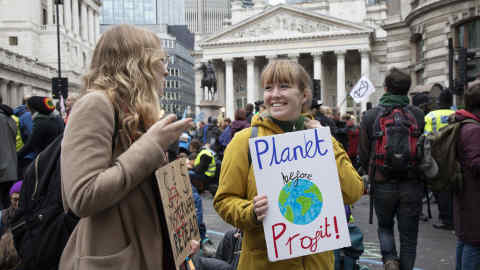 Some business schools argue it is impossible to separate their own operations from the wider functioning of their university. Others suggest that their emissions are less important in informing and inspiring future generations than teaching their students about sustainability or conducting groundbreaking academic research in the field.

Another difficulty is harmonising the multiplicity of reporting standards, environmental audits and awards to achieve consistent, comparable measures between institutions within and between different countries.

Schools such as Darden and Gustavon concede that the process is not easy: reducing waste, including of food, is difficult, and cutting travel risks constricting international research and pedagogy. Yet Majerbi argues the switch to online learning and conferences imposed by coronavirus has sparked fresh reflection about the need for so many flights.

“I think we have an excellent opportunity to have a complete revamp of our approach,” she says. “My hope is that future staff and student travel will be substantially reduced. I think people will choose carefully.”