The 262 words that frame Britain’s EU divorce came to life on a kitchen table. The date was early 2003 and the place the small Brussels flat of John Kerr, a veteran British diplomat turned secretary-general for a conclave to develop a new EU constitution.

His job for the European Convention was to draft a formal exit clause for countries to leave the EU, a scenario the union had preferred to ignore. After a few years of lively political debate, a couple of failed referendums and a revised agreement known as the Lisbon treaty, those words became the notorious Article 50, the law paving the way to Britain’s EU afterlife.

At the time it was moderately controversial, but only in an academic way. “I certainly did not imagine it would be used by us,” the now-Lord Kerr says. “But it is better to have a framework for leaving rather than none.” How that secession clause is interpreted, the constraints it imposes on talks and what bargaining power it hands the EU will be a crucial factor in handling Brexit.

For the weight it carries, Article 50 looks like a bare skeleton, but it is the only formal structure for what ministers describe as one of the world’s most complex negotiations.

So potentially unforgiving are its terms that David Cameron, former British prime minister, dubbed triggering Article 50 “the gamble of the century”. His successor, Theresa May, has barely settled in to Downing Street yet is already under pressure from European countries to invoke it. There is nothing to stop Mrs May walking away from the EU and cutting all Britain’s legal ties in one swoop. But to salvage anything from the 40-year partnership requires an exit deal under Article 50 — agreed via EU rules, under the pressure of a two-year deadline only the EU can extend.

News in-depthBrexit
Four scenarios: how the Brexit process could unfold 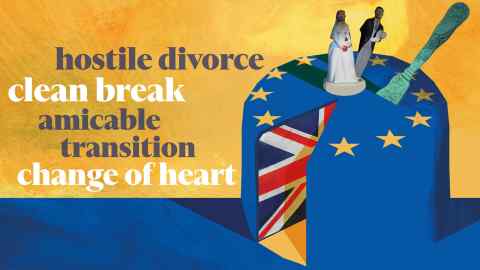 Here, the Financial Times explains five of the most contentious issues over the Article 50 negotiation: the trigger, the clock, the balance of power, the options and the reverse gear.

There is no precedent for using Article 50. Indeed for the European project’s first half-century, countries had no formal route out of the union. France first suggested one be included in the Treaty of Rome, which laid the foundations for “ever closer union”. But it was rejected, along with successive mini-initiatives, from Germany in 1957, the draft Spinelli constitution in 1984 and from assorted reformers in 1996.

There has never been any doubt that a country could leave the bloc in practice under international law. But the captains of the project always saw it as not just a flimsy treaty, but an enduring sovereign bond. As Allan Tatham of Madrid’s San Pablo University quipped in a paper on the subject: “Don’t mention divorce at the wedding, darling!”

Eventually supporters of a secession clause thought it was time to construct an orderly process.

“I wanted to put an end to the sort of [Eurosceptic] stuff about how we are chained to the oars of the EU with no way out, galley slaves heading to an unknown destination,” says Lord Kerr. “It was nonsense. If a country stopped paying the bills and stopped turning up at the meetings in the end they would be out, whatever the rules.”

When the first drafts of the exit clause were being debated, federalists were more torn over arguments that still have resonance. Some countries, including Germany and the Netherlands, objected on principle. Others wanted the clause written in a way that stopped a country breaking free without EU consent.

“It could develop into a blackmail clause or into a take-the-money-and-run clause because you can leave even without an agreement,” said Frans Timmermans, now vice-president of the European Commission, who was a delegate to the constitutional convention.

With hindsight, the two-year deadline appears to have been quite a hurdle for secessionist states. Some senior EU officials believe Britain “will never notify” and give the tactical whip hand to Brussels, but will instead attempt to negotiate an exit deal outside Article 50.

It echoes the views of one prominent campaigner when the withdrawal clause was published in 2004.

“It is called the exit clause but it’s actually a trap that would mean Britain would be reduced to a colonial state,” said Nigel Farage, then leader of the UK Independence party and a cheerleader for the Leave campaign. “No prime minister could ever do it. If [it becomes law] there is no way out.”

Article 50 states: A Member State which decides to withdraw shall notify the European Council of its intention.

Here lies the button. Once pressed, the Brexit break-up formally begins. Theresa May is waiting until the new year; Brussels and hardline EU states want the process activated sooner. Only the UK can decide to invoke Article 50. But if Britain plays tactical games, and talks turn hostile, the EU has options. It might aggressively interpret “notification”, or punish the UK in other ways. But that is a last resort, and would need some creative lawyering.

Article 50 states: In the light of the guidelines provided by the European Council, the Union shall negotiate and conclude an agreement with that State, setting out the arrangements for its withdrawal, taking account of the framework for its future relationship with the Union.

Possibly the most important and least understood phrase in Article 50. These 12 words capture a defining feature of EU divorce: there is not just one deal to leave the bloc, but probably two or more. And they are negotiated under different rules, and most likely at different speeds.

Article 50 is largely backward looking. It deals with unravelling the legacy of membership, from budget dues or expatriate rights. One extreme way to do that is a clean break. That would simply sever UK-EU obligations: budget payments, membership rights of EU agencies, liabilities to pensions for EU staff, funding arrangements for UK universities — on a set date all of this would end.

Anything else requires a more complicated negotiation. To maintain areas of co-operation you need to roughly know what sort of relationship will follow divorce. So, for instance, any serious exit deal on EU university spending will make assumptions about future UK-EU relations. Would research co-operation continue? Will the UK continue making EU budget payments? Without making such assumptions, the only possible answer is a hard break.

Some of those pacts require a separate negotiating track; the EU cannot agree certain things under Article 50. It is not a short circuit to the treaty. A trade deal, for example, would involve more laborious voting and ratification rules, which take longer. A comprehensive deal, for instance, would need unanimity between 27 countries and ratification through 38 national assemblies and the European Parliament. That takes time and a lot of political capital.

So before an exit via Article 50 is complete, probably the best Britain can hope for is an agreement on a “framework” for future relations — such as agreed objectives for a trade deal. That makes building a transition to that point easier. But it also means there is a lot to agree to avoid a hard break with the EU.

Article 50 states: The Treaties shall cease to apply to the State in question from the date of entry into force of the withdrawal agreement or, failing that, two years after the notification referred to in paragraph 2, unless the European Council, in agreement with the Member State concerned, unanimously decides to extend this period.

The guillotine. The first deadline for talks is two years. After that, few senior EU officials believe it would be significantly extended. They do not want talks to drag on. This probably means that Britain’s exit deal will be settled in the early hours of the morning after a gruelling summit. The way Article 50 is drafted implies that there will be no deal until everything is agreed because there are too many moving parts. That suggests a protracted period of uncertainty for businesses and EU citizens.

This sentence sets the voting rules for the EU to decide on Britain’s exit deal — without Britain in the room. Its importance is more than practical. Britain remains a full member, with full membership rights, until the day it leaves. But that day is in reality the legal finale to a longer parting of the ways. In the hours after the Brexit vote, as Britain’s influence in Brussels institutions fell away, EU leaders already started to meet without Britain to discuss Brexit’s consequences. Diplomats expect the sense of separation to grow as the divorce talks raise tensions, and British officials either walk away from or are pushed out of EU policymaking processes.

Article 50 states: If a State which has withdrawn from the Union asks to rejoin, its request shall be subject to the procedure referred to in Article 49.

Can Britain change its mind once Article 50 is invoked? Can the process be stopped or is it a one-way road? On this, the treaty is almost silent.

It makes clear that any country, once it has left, cannot rejoin without repeating the demanding EU accession process, which would include unthinkable political conditions for Britain like pledging to join the euro. 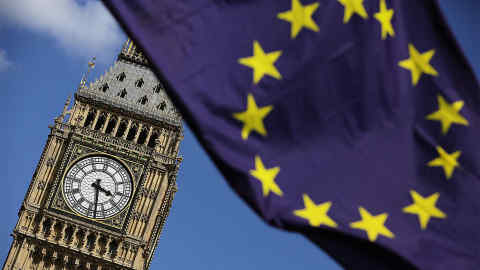 Charles Michel, the Belgian prime minister, hinted to the FT that if there was a request to reverse Article 50 it would be a difficult discussion, saying he fully expected Britain to “respect the choice of the people”.

Lord Kerr argues that the absence of explicit guidance is telling. “There is nothing in the treaty saying it’s irreversible. So it isn’t. But of course some might want some sort of price to be paid,” he says.

European Commission lawyers take a harder line. To them, a decision to invoke Article 50 is a legal act that cannot be withdrawn. In practical terms, one scenario they want to avoid is a hostile Britain withdrawing and resubmitting its notification, thereby resetting the two-year deadline. “This cannot be done unilaterally,” says a senior EU official.

Should this situation arise, there is a middle ground. If the treaty is silent on any issue, the interpretation of the EU’s 27 leaders would hold. In short, to be confident of stopping the Brexit process, Britain would need unanimity.