We use cookies (opens in new window) for a number of reasons, such as keeping FT Sites reliable and secure, personalising content and ads, providing social media features and to analyse how our Sites are used.
Manage cookies
Accept & continue
Li Keqiang

Europe split over whether to grant China market economy status

Supporters see MES as a way to win favour in Beijing, while critics argue it will kill industries

Christian Oliver in Brussels and Michael Pooler in London

At the end of October, Li Keqiang, China’s premier, toasted Angela Merkel. He and the German chancellor cheerily clanked large tankards of German-style dark beer brewed by the students at Hefei University in eastern China.

Mr Li’s high spirits in Hefei were easy to explain. The EU’s most powerful leader revealed she was “in principle, positive” towards granting market economy status (MES) to China, offering fresh hopes that one of Beijing’s most prized ambitions could be realised in 2016.

Still, Ms Merkel also admitted that MES was a double-edged sword. She warned that China still had work to do, particularly in the field of procurement contracts. Elsewhere on her trip, she cautioned that Europe’s steel and solar industries — seen as especially vulnerable to Chinese dumping — needed protection.

Our concern is not to protect markets but to ensure a fair, level playing field

Ms Merkel’s ambiguous message, tailored for both Mr Li and European industries, laid bare the EU’s tortured position over whether to grant MES.

Diplomats and businessmen involved in the process say that the European Commission is likely to propose MES for the Communist state as early as February. The 28 member states and European parliament will then have to decide whether to approve that proposal. Britain is the strongest supporter of China, while Italy is adamantly opposed to MES.

To its supporters, MES is a way to win favour in Beijing. This can smooth the course of EU factory investments in China and help boost Chinese financing of infrastructure in Europe.

But critics argue that MES will kill traditional industries, including steel, ceramics and textiles, because it will become far harder to retaliate against Chinese dumping with countervailing tariffs. The left-leaning Economic Policy Institute in Washington has concluded that MES would endanger as many as 3.5m jobs in the EU.

Europe’s need to make a decision on MES next year is rooted in the terms of China’s agreement of accession to the World Trade Organisation in 2001. Beijing argues this accord means that it will automatically become a market economy at the end of 2016. The EU needs to decide whether it agrees with that interpretation.

Europe’s traditional industries have led the campaign to deny China MES. The €28bn ceramics sector says that as many as 100,000 jobs, or half the total it employs in Europe, are at risk. About 33,000 jobs were lost in the tableware sector in the seven years to 2011 before anti-dumping tariffs were imposed, according to Cerame-Unie, a trade body. 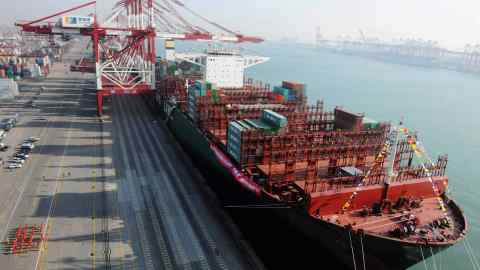 “Our concern is not to protect markets, but to ensure a fair, level playing field and prevent injurious effects of unfair practices, like dumping and subsidies,” said Alain Delcourt, president of Cerame-Unie.

Volumes of Chinese steel entering Europe have nearly doubled over the past two years, according to Eurofer, the European Steel Association, even as demand for steel languishes. It warns of “massive job losses and plant closures” should MES be granted. “Already we have the most open market with less efficient [trade defence] tools than other regions, such as the US,” said Axel Eggert, director-general of Eurofer.

His comment reflects widespread frustration with the European Commission for being slow to act against trade infringements. Business people often see Brussels as reluctant to use anti-dumping tariffs against China, as they can spark threats of counter-attacks from Beijing in unrelated sectors. Beijing, for example, threatened to clamp down on EU wine imports in 2013 in a dispute over solar technologies.

Officials in the commission complain that industry is exaggerating the idea that the EU would be pulling down its defences, and some even expect that EU manufacturers higher up the value chain using cheap Chinese raw materials could profit from MES.

EU trade officials say that other safeguards — including anti-subsidy measures — can be used against market economies such as the US and Russia. But companies complain that the burden of proof is far higher than in dumping cases. For anti-dumping cases, Brussels can prove Chinese prices are unfairly low by referencing prices in third countries. Subsidy inquiries can require documents as evidence, which are often impossible to obtain from China.

Hosuk Lee-Makiyama, director at the European Centre for International Political Economy, predicted a long fight. “Even if the EU starts the legislative process today, it’s unlikely to be ready for adoption before the 2016 deadline. Some member states are apprehensive of fair rules on anti-dumping to begin with, and would also manipulate their EU parliamentarians for that reason.”

Letters in response to this report:

Get alerts on Li Keqiang when a new story is published