Prince Alois, the hereditary prince of Liechtenstein, struck a note of urgency when he addressed his people at a national day celebration outside his 700-year-old castle perched above an Alpine valley in August.

The tiny European state, population 38,000, nestling between Switzerland and Austria, is among the world’s most successful economies — the result largely of managing the wealth of the global rich. But, the prince warned, the principality had to “work continuously” to secure and “renew” its advantages.

Liechtenstein’s business proposition has certainly changed over the past decade. It is no longer a refuge for tax evaders: information is exchanged automatically with a host of other countries, including the US. Regulations have been overhauled, especially on combating money laundering, and the focus has been on providing a world-class service to affluent, tax-compliant customers around the world.

But not everything is perfect. Those who have wealth stashed in trusts set up in the tiny principality may face other risks. Liechtenstein has been jolted in the past year by court cases in which local financiers have been accused of abusing clients’ funds. International lawyers question whether its laws on trusts, dating from the 1920s, are fit for purpose in an age of increasing global financial transparency.

Compared with other countries, trusts set up in Liechtenstein give “discretionary beneficiaries” — those who have no fixed entitlements but benefit at the discretion of trustees — fewer rights to information about the workings and assets held by funds.

“I’m afraid that because of the still pervasive legal culture of non-disclosure and lax governance, the Liechtenstein financial market might be at risk in the long run,” says Martin Schauer, law professor at Vienna University.

Tax Justice Network, a lobby organisation, ranks Liechtenstein 12th in its world financial “secrecy” country ranking. “People are not generally using secrecy to hide good behaviour,” says Alex Cobham, Tax Justice’s chief executive. Secrecy might guard against the risk of client assets being seized by malevolent governments but could mean “your advisers end up embezzling your money and you can’t see what’s going on,” he says.

One trust expert who advises wealthy clients in Zurich says: “We don’t feel that the reputation of Liechtenstein is what it should be.”

For visitors, Liechtenstein is picturesque, but with an air of calm and boring stability. Modern Vaduz, the capital, feels like a rich suburb of Frankfurt, Germany’s financial capital. It is just the sort of image needed to inspire the confidence of conservative clients wishing to keep a low profile.

However, the principality was dealt a severe blow in the wake of the financial crisis. Under pressure to shore up fiscal revenues, western governments turned against financial centres that were helping tax evaders.

After Germany paid €5m for a data disk stolen from LGT Group, a private bank and asset management group owned by the royal family, the information it contained led to the downfall, among many others, of Klaus Zumwinkel, the chief executive of Deutsche Post, who admitted using Liechtenstein to avoid paying almost €1m in taxes. A US Senate report in 2008 concluded Liechtenstein’s secrecy laws had “served as a cloak not only for client misconduct, but also for bank personnel colluding with clients to evade taxes, dodge creditors and defy court orders”.

Liechtenstein’s leaders say the country has since reformed completely. Prince Alois says that the move towards full tax transparency was “not easy”. But he adds: “We’re now very much respected for having made this change — and Liechtenstein is seen as having a good reputation in other areas, like political and economic stability and its good regulatory set-up.”

As a member of the European Economic Area, Liechtenstein is obliged to implement EU rules including on transparency and money laundering.

But its laws on trusts and foundations, vehicles used widely as ways to distribute assets over time, including after the death of wealthy individuals, differ from neighbour and financial rival Switzerland.

Liechtenstein in the 1920s introduced innovative legislation allowing the creation of trust funds with a flexibility over their format and provisions for secrecy that attracted international clients.

Using such vehicles to evade tax “was part of the business model for many years”, says one lawyer working with Liechtenstein trust beneficiaries.

In the past, a culture of secrecy made Liechtenstein trusts attractive to those who worried about hostile governments or tax collectors knowing details of their wealth. Restrictions on the disclosure of information to discretionary beneficiaries appealed to benefactors wishing to keep relatives split by feuds from knowing what each is receiving.

The secrecy provisions have since been overturned. However, the powers invested in Liechtenstein’s wealth managers can also be abused. In November 2017, Harry Gstöhl, a top judge until 2004, pleaded guilty and received a six-year jail sentence on charges of money laundering and aggravated fraud relating to SFr13m in his role as a trustee in the period 2010-14. The sentence was extended to eight years after further charges were heard in October.

Liechtenstein prosecutors also confirmed that in a second case, a 53-year-old manager of a trust company was arrested earlier this year and detained on suspicion of breach of trust, embezzlement and fraud.

Another case has erupted into a high-profile legal battle being fought in courts around the world. Tamar Perry, the daughter of an Israeli tycoon, has accused the trustee of a fund set up by her late father of misusing money meant for her family. Her case against Vaduz-based Lopag Trust, the trustee, has resulted in legal action in the US, the UK, Switzerland and Israel as well as Liechtenstein.

In Liechtenstein, Perry says, “the beneficiaries [of a trust] have no rights. If a trustee is stealing your money, you can bang your head against a wall and it will help more than a court in Liechtenstein,” she says — a claim disputed by the trustee. 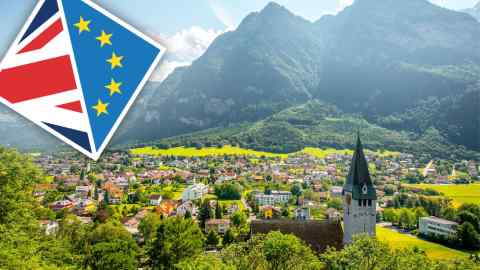 Lopag Trust says its actions have been backed by courts and maintained that Perry was trying to seize sole control over the trusts set up by her father, to the disadvantage of other beneficiaries. It said Perry had repeatedly rejected attempts at an amicable settlement.

Local lawyers dispute the lessons to be drawn from these court cases. Gstöhl’s case shows that criminal actions, inevitable in any jurisdiction, are caught and that “we also prosecute dignitaries”, says Stefan Wenaweser, partner at Marxer & Partner, a Vaduz firm that advises on trusts.

In the Perry case, he says that the supreme court last year upheld the principle of protecting discretionary beneficiaries and ordered a lower court to take measures to protect their interests.

Others, however, say the cases expose serious flaws in the system. “The new culture of openness has not yet reached the mindset of all participants and will need something more than just changes in the law,” says Professor Schauer.

The principality has made efforts to improve. Its law on foundations, which are more familiar to clients from countries with codified or civil legal systems, was overhauled in 2009. The new law strengthens the rights of beneficiaries to seek documents and information.

But Liechtenstein law on trusts is largely unchanged since the 1920s. Whereas other jurisdictions, including the Channel Islands, have given trustees some freedom to give beneficiaries information, Liechtenstein courts have taken a much tougher line.

In response to criticism of this system, the Liechtenstein Institute of Professional Trustees and Fiduciaries is discussing amendments with the government that would, among other changes, clarify rights to information for discretionary beneficiaries. The institute has also overhauled its code of conduct to make it easier for beneficiaries to switch the trustees appointed to manage their assets.

Separately, the Liechtenstein Financial Market Authority is pushing for the government to increase its supervisory powers over the fiduciary sector, which relies largely on self-regulation. “We recognise the need for action in the supervisory system,” said Mario Gassner, the FMA’s chief executive.

Meanwhile, Liechtenstein expects by the end of the year to have implemented EU anti-money laundering rules requiring the creation of a register of trusts and beneficiaries. This will not be public but accessible by law enforcement officials and others with legitimate interests.

Will it be enough? Even critics believe Liechtenstein trusts have a future. “They can be reformed, but we need the rule of law for beneficiaries. They cannot be left in the dark,” says Johannes Gasser, a lawyer who works with beneficiaries taking action against trustees.

There are no statistics on the number of Liechtenstein trusts, let alone the assets held in them. Local practitioners say the fiduciary sector remains active. “We’ve had a couple of years when business was going backwards. My experience is that it is now stepping up again,” says Wenaweser.

Liechtenstein’s banks would prefer to put “legacy” issues behind them. The focus of the principality’s financial industry has shifted towards competing with Swiss and other banks in managing the portfolios of global clients, on a fully tax-compliant basis.

At the castle, Prince Alois points to the conflicting demands by politicians. As well as tax transparency, “there is also a need for privacy and the protection of data — that continues to be a topic. If you trust somebody with your money, you want to make sure that it is safe.”