As the 16th edition of Art Basel Miami Beach opens this week, Berlin’s Tanya Leighton gallery in the fair’s Nova corner seems to have brought a pop-up Hawaiian shirt store. Get closer and the clothes, by Russian-American artist Sanya Kantarovsky in collaboration with fashion designer George McCracken, contain disturbing images — there are angry, wizened men strangling each other — all questioning an era of self-interest, degeneracy and the relentless pursuit of happiness.

It’s an apt metaphor for the Miami fair, so long associated with beachside glitz and glamour but now increasingly a platform for highly politicised art. “There’s no question that this is a serious fair, it’s Art Basel in America, and therefore a place for issues and works that are emerging out of the situation of America at the moment,” says Simon Gowing, director at Tanya Leighton.

It’s partly circumstantial. Last year’s edition was the first major fair held after the election of Donald Trump as US president and proved the “apex” of Art Basel Miami Beach as a political platform, says Noah Horowitz, Art Basel’s Americas director. Work made in response in a matter of weeks, such as Rirkrit Tiravanija’s bold text and newsprint works with phrases including “The tyranny of common sense has reached its final stage”, had their outing in Miami 2016.

Horowitz acknowledges the fair has not always been associated with such messages. “A lot happens outside that lends a party feel,” he says, but “the clichés of old are lessening.”

This year, Trump’s America still pervades the booths and issues of race relations and civil rights look to loom large, hot on the heels of Tate Modern’s landmark Soul of a Nation: Art in the Age of Black Power exhibition, which travels to the Crystal Bridges Museum of American Art in Arkansas, then New York’s Brooklyn Museum. The fair also coincides with the fourth edition of New Orleans’s Prospect triennial, which has at its core the jazz phenomenon that grew out of African-American slavery (until February 25).

In Art Basel’s Survey section for work made before 2000, New York’s DC Moore gallery brings a solo booth of works from between 1965 and 1975 by David Driskell, a Civil Rights Movement artist and academic. These include “Soul X” (1968), invoking human rights activist Malcolm X who was assassinated three years previously, and “Of Thee I Weep” (1968), which incorporates the American flag, a recurring symbol in African-American protest art (paintings priced between $185,000 and $285,000, works on paper available from $42,000).

The American flag also features hauntingly at Kavi Gupta’s booth in the form of Glenn Kaino’s 2017 “Spontaneous Combustion (03:02:47)”, a flag piece tie-dyed with a Civil War-era solution that creates a shadow of the Stars and Stripes ($50,000). “There’s no way we can’t have our artists not somehow be involved in the political conversation any more,” Gupta says. He is showing Kaino’s work alongside pieces by Gerald Williams, a Soul of a Nation artist and co-founder of AfriCOBRA — a Chicago collective formed in 1968 and the only group to form a Black Art manifesto at the time — including his homage to Malcolm X, “Malcolm” (1970). Williams’s paintings are priced between $70,000 and $90,000; works on paper from around $15,000.

As with the rediscovery of feminist artists of the 20th century, these re­visited movements chime with today’s political and social preoccupations. “It’s again not a bright era for African Americans, in the US and the rest of the world,” says Edward De Luca, director at DC Moore gallery. New works by Detroit-born Jibade-Khalil Huffman at Anat Ebgi gallery in Positions (and in Art Basel’s Film sector) are less politically strident but emphatically reference black culture, including music, film and literature. Ebgi says that Huffman’s show in her Los Angeles gallery earlier this year was “extremely well received”.

Horowitz says, “It’s much less about ‘art fair art’ now. People come to fairs to gain a lens into the trends and at the moment art is generally more politicised.” Art Basel’s talks programme too has some less likely candidates, including Alexander Alberro, professor of art history at New York’s Barnard College (his recent book, Abstraction in Reverse, is the basis of a talk on December 7).

However, this fair is of course still primarily a commercial event. “This is a good time of year. People have seen a season of exhibitions, a series of big auctions, taken stock and know what they are looking for,” Horowitz says. 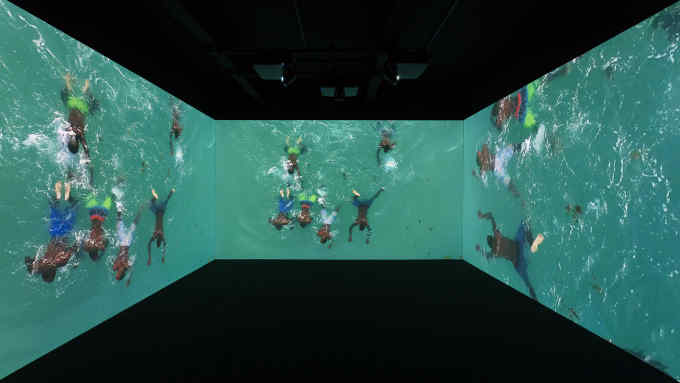