How to crunch the cost of joining a gym

In a crowded market, it pays to put in the hard yards by exercising your options
Eoin McSweeney

So you’ve decided to join a gym. Congratulations — that was the easiest part of the process. Which gym to join is a much harder decision to make and one with varying degrees of financial pain.

I recently moved to London, and have been looking for both a permanent job and a home. A regular gym goer, I didn’t want to commit to a traditional membership as I didn’t know where I would be living or working. Finding out about the alternatives opened my eyes to how young, city dwelling gym goers can crunch the costs of a workout.

The health and fitness industry has never had more members, gyms or greater market value than it does now. There are more than 7,000 health and fitness clubs in the UK and about one in every seven adults has a membership, according to a report by market intelligence firm the Leisure Database Company.

The UK market is valued at more than £5bn; part of a global market said to generate $90bn in revenues per year. Some $28bn of this is attributable to the US, a figure which has tripled in 20 years.

The good news for gym goers is that rising competition has forced businesses to lower prices and increase innovation, so it is easier than ever to tailor a personalised fitness regime with little cost.

While the middle market is being squeezed, those breaking a sweat at the top end may still break the bank.

“The gym is the new club,” says Mike Dean, head of European sales at F45 Training, one of the fastest growing boutique fitness chains. “It’s more of a lifestyle than a chore now.”

Certainly, there are plenty of luxury gyms in London that have the air of a private members’ club about them. Joining Equinox could set you back £240 per month with a £400 joining fee (though if new members work out eight times in January, this will be refunded). With three London locations in St James’s, Kensington and Bishopsgate, personal training sessions cost up to £130 an hour.

David Minton, director of LeisureDB, claims the industry is experiencing a “fit-ainment moment” where “fitness, entertainment and experiences come together as the consumer demands more personalisation”.

Boutique studios such as The Library, Barrecore and TRIB3 have seized on this trend, offering retreats, functional high intensity workouts and even sleep coaching. However, marble floors and a cryotherapy offering don’t really represent good value for a young millennial on a graduate salary. 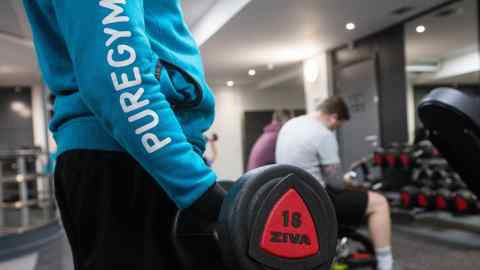 Low-cost fitness clubs such as Pure Gym and The Gym Group have powered much of the market growth in the UK, poaching existing customers from mid-market chains.

Dina Asher-Smith, the world champion sprinter, is an ambassador for Pure Gym, which offers memberships in central London ranging from £15 to £49 per month with joining fees as cheap as £15.

Other low-cost gyms in the UK include énergie Fitness and 24 Hour Fitness, but global chains such as Anytime Fitness could appeal to young business travellers.

In the US, Planet Fitness has more than 1,800 locations and offers membership in Manhattan for $10 a month with a $40 annual charge.

When comparing prices, factor in what else is on offer — DW Fitness, Pure Gym and 24 Hour Fitness all offer more than 200 classes a month which are included in the price of your membership.

With dozens of gyms now situated in a few square miles, the savvy city-dwelling millennial can sign up via email to free trials for weeks.

I used the free three-day trials offered by DW Fitness First and 24 Hour Fitness in London. Others, such as Nuffield Health, are willing to gift one-day passes that include access to swimming pools and steam rooms. Lounging in a sauna or jacuzzi after work is certainly more pleasurable when it’s free. And after these trials, gyms would typically send discount codes offering deals on longer memberships.

Ads for cheap, digital gym membership alternatives have also been projected on to my Instagram feed. I have tried London-based Fitu, an app which offers group fitness classes from freelance trainers at any time or location. The flexible app is free and I only have to pay when booking a workout, some of which are only £5 (expect to pay more at peak times, or for the latest fitness class fads).

ClassPass, a subscription service allowing members to attend more than 30,000 fitness studios and gyms, is currently offering a one month free trial. There is a £65 auto-enrol sting and cancellation fees apply if you miss classes, but memberships start from £15 a month for a limited number of classes.

Committing to a longer membership is another way to save money. Nuffield Health offers a 10 per cent discount and the first month free if you choose their one-year contract rather than joining on a rolling monthly basis.

Even if your gym does not openly advertise such deals, rising competition means you could be able to negotiate a reduction, a waiver on joining fees or free premium services.

For me, and plenty of other transient millennial workers, inflexible contracts are not always rewarding. This wasn’t an option for me because I was on an apartment hunt.

Fixed memberships can also be difficult to cancel and you may only be entitled to a 50 per cent refund. “Customers want simpler, easier payment and sign-up systems,” says Mr Minton. “They are after a more personalised experience that is more functional.”

Budget gym chains not only offer easier cancellation, but the option of adding multiple locations to a membership. Anytime Fitness promised I could workout at any of their 4,000 locations worldwide 24/7 at no extra cost. This is especially useful for anyone who travels, works late or just wants a gym close to work and home.

Pure Gym would give me access to all their gyms for £52.99 a month, while DW Fitness First and The Gym Group use tiered prices if you want multigym access.

Eventually, I joined a low-cost gym on a rolling monthly basis for £35 with multiple gym access and free classes, meaning I can work out close to my new apartment and near work.

I supplement this with the occasional cheap class on the Fitu app. As the weather improves, I may sign up for Parkrun, an organisation which offers free 5km timed runs in green spaces around the world on Saturday mornings. And I remain on the lookout for any free deals on a jacuzzi.