Lessons from the electrician, plumber and chimney sweep’s plans, or lack of them
Josephine Cumbo

It was supposed to be a day free of pensions. Staying at home to open the door to an electrician, a plumber and then a chimney sweep, I expected my involvement to stop at keeping them supplied with tea and coffee as they went about their work.

In fact, what transpired was an object lesson in the savings challenges facing the self-employed, a class of worker particularly susceptible to the inadequacies of our current incentives to encourage people to set money aside for retirement.

First to arrive was Robert, the electrician. He told me he ran his own business, a conversation that eventually led to the subject of his pension arrangements.

Pensions are of increasing importance to the self-employed, who are far less likely than others to have one. Only about one-quarter of the 4.8m self-employed are actively saving into a pension, a big drop from 40 per cent a decade ago.

So, what was Robert’s retirement plan? Typical of many who work for themselves, he said his business and his home were his pension.

Even his financial adviser had seen weak spots in this plan, imploring him for years to set up a pension.

Why, I asked, had he not chosen to heed the advice? Topping up his coffee, Robert told me he didn’t think he could afford to save into a pension. He also didn’t trust pensions, having seen his mother lose money in the 1990s as an Equitable Life policyholder.

I tackled the first issue. Robert said he liked to spend his money on holidays, treating his family to overseas trips that his own parents were unable to afford when he was growing up. He was clearly a man who wanted very much to take care of his nearest and dearest.

Was he not keen to continue treating his family in this way in retirement? He was. I noted his van was a new model in good nick. Would he like an upgrade to a car when he retired? He said he would. How, then, was he going to afford it? “I don’t know,” he replied. “I don’t know how much is enough.”

Rather than try to work this out for himself, I suggested he go back to his adviser, whom he trusted, and ask him to put a price on his retirement dreams. Robert could then work out what was realistic for him to save today for tomorrow. I also gave him an online link to a state pension forecast service so he could check what he was on course to receive.

As Robert left, he volunteered that he would have his pension sorted by next visit.

Next to arrive was David, who’d come to check the boiler. Feeling enthused by the positive response from Robert, I cautiously ventured into pensions chat.

ExplainerNext Act
Pay into a pension or work into old age? 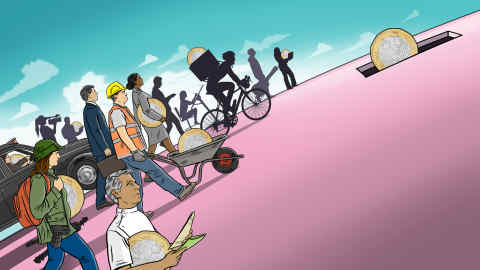 Unlike Robert, David was an employee. And since the last time he checked our boiler, he had been automatically enrolled into his company pension scheme. He had a vague sense of what was going into his pension (5 per cent) but didn’t know whether this was enough.

While he was checking the radiators, I informed him that experts suggest 10-15 per cent of salary was about right for someone in their early 40s. He was gobsmacked.

As he left, I told him about the Pension Advice Allowance, which would allow him to take £500 tax-free from a workplace pension to redeem against the cost of financial advice. I also gave him the number of the Pension Tracing Service, to check for any old pension pots he’d forgotten about.

Last through the door was Jamie, a self-employed 28-year-old chimney sweep. Would he buck the trend by having his pension sorted? I decided to ask. But there was no surprise ending to the day. Jamie did not have a pension. In fact, pensions were not even on his radar. Like most of those his age, he was focused on saving for his first home.

Jamie left with some tips about pensions tax relief and on how savings can grow through the power of compounding. I also told him about the Lifetime Isa, which offers tax breaks for under-40s to save for their first home.

So what did these exchanges tell me about the state of our pensions system? It is clear that without the benefit of an employer to choose a pension and pay into it, many self-employed people simply find pensions overwhelming.

The government would do well to consider proposals to use the tax system to nudge the self-employed into a pension scheme. First floated by Sir Steve Webb, former pensions minister, the idea is that HM Revenue & Customs, when working out a self-employed person’s tax bill, would collect a percentage of taxable profits — say 4 per cent — before allocating it to a pension the person had named (unless they had opted out of this process when earlier filling out their tax return).

Finally, knowing how much to save is a major problem, even for those paying into a workplace pension. The Pensions and Lifetime Savings Association, an industry body, has suggested a “Retirement Income Target” system which helps individuals more easily understand how much they need to save to achieve their retirement dreams, whether that be holidays for the family, or upgrading the car every few years.

After my conversations with Robert, David and Jamie, this seems an eminently sensible approach.