We’ll send you a myFT Daily Digest email rounding up the latest HS2 news every morning.

When the demolition ball crashed through the walls of the 154-year-old Bree Louise pub in central London to make way for the route of the new HS2 railway line, it also smashed a hole in Craig Douglas’s life.

Mr Douglas handed over the keys to his home and business near Euston station on January 31 2018. But it was another 14 months before he was paid anything by HS2 Ltd, the taxpayer-funded company set up to manage the line. In the meantime he was unemployed, unable to buy another pub and racking up debt while renting an apartment to house his family nearby.

“It was my house, my home and my business and it’s all been taken away from me,” said Mr Douglas, who owned the pub for 17 years and raised three children there. “It’s been a tough journey and I’ve probably been clinically depressed.”

Owners of scores of other properties along the route of HS2’s first phase from Euston station in central London to Birmingham, have had the same experience. Despite rules stating they should receive 90 per cent of the estimated value of the land within three months, there have been long delays to payments and many believe their properties have been severely undervalued.

Last year the National Audit Office found that HS2 had completed only half of the legally required advance payments on time.

About 12 property owners have already appealed against their valuation to the Lands Tribunal, according to a freedom of information request by a law firm given to the Financial Times. According to surveyors, more appeals are coming, even though the process is lengthy and expensive.

The claimants’ complaints — and the implications that costs could rise even further as a result — come as a government review assesses whether to go ahead with the construction of the £88bn railway line, following concerns over ballooning costs.

These were in part caused by mismanagement, according to critics, including allegations that HS2 failed to accurately assess land conditions or the cost of property it needed to acquire in the rush to secure parliamentary approval for the project in 2017.

In March Mr Douglas finally received £575,000 from HS2, which estimated the value of the business at about £500,000. But Mr Douglas reckons the claim for the property and business, which had £1.5m turnover a year, should be more like £4.2m.

HS2 has given “no reason or substantive justification” as to how it reached its figure, he said.

Mr Douglas concedes he was slow to provide initial documentation. But even once he had provided the documents there were long delays and HS2 disregarded expenses, such as the debt incurred from living costs and rent as well as redundancy payments for 18 staff. He is still fighting for compensation, and may ultimately be forced to go to the Lands Tribunal.

“Even if I win I will never get the money back on all the debt and stress I’ve had to take on,” he said.

No detailed cost breakdown of the whole HS2 project has been made public since 2013. But in its annual report in March, the company said it had spent £2bn purchasing 1,274 properties along the route of the project’s first phase — including a number of key sites, such as those in Euston — or 35 per cent of the overall land required to build HS2.

Michael Byng, a railway cost expert who estimates the cost of the line will reach £100bn, believes that the price of property requisition — the largest since the second world war — has risen to at least double the £2.3bn figure put to parliament in 2017 and may exceed £11bn for the entire project.

“The original study appears not to have been prepared in accordance with RICS [Royal Institution of Chartered Surveyors] ‘Red Book’ valuation practice and the ‘Compensation Code’ rules for disruption and disturbance, but of course should have been,” he said.

James Collier, a surveyor who represents about 30 farming clients on Phases 1 and 2 of the scheme, described the entire land acquisition process as a “shambles”. He accused HS2 of “micromanaging” the qualified surveyors it appointed and “not giving them the autonomy to get deals done”.

“They are penny pinching on compensation claims, and yet wasting huge sums on professional fees by not allowing their agents to do their job efficiently,” he said. “Each claim, for even petty amounts, seems to have to go through a tortuous ‘governance’ process, and their own agents’ advice is often being overruled from above.” 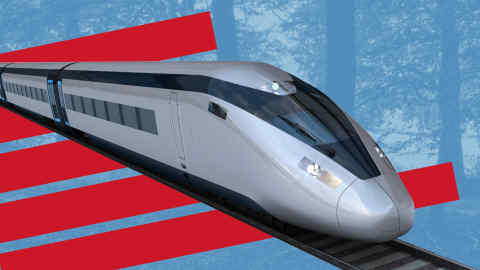 Peter Hughes, who has had part of his property at Truggist Hill farm, near Coventry, requisitioned, said he has found obtaining compensation an “abominable” process. He received a payment of £729,000 at 5.30pm on the day the land and buildings were taken from him in June.

HS2 tried to delay the payment but we “dug our heels in”, he said. “We certainly weren’t going to move out and we weren’t going to let them move in without payment. It would have been war.”

The compensation has had a “devastating” effect on his family, said Mr Hughes. “We couldn’t buy anything that would remotely replace what we are losing with the amount we have received so far. The rent from the buildings was meant to be our pension fund but the money they’ve paid isn’t good enough for anything.” He is considering an appeal.

HS2 Ltd said it was seeking “a fair deal for both claimants and taxpayers”. “Every home, business and piece of land is unique, and there are sometimes different opinions between owners, their professional advisers and HS2. For this reason, there are some outstanding compensation sums to be agreed.”