It is important to know who you are doing business with

Businesses face many hazards — from earthquakes and terrorism to currency gyrations, regulatory compliance difficulties and the fickleness of customers. But experts say that the trend towards longer and more complex supply chains is exacerbating the risks.

“There are many more areas of exposure today than in the past,” says Razat Gaurav, executive vice-president and general manager for JDA Software, a supply chain management company.

Currency movements are broadly expected by most businesspeople. In a recent study of global chief executives by JDA and PwC, volatility in raw material costs in the year ahead was factored in by 84 per cent of those questioned. Exchange rate volatility was anticipated by 78 per cent.

“In the past year, some countries in Latin America have devalued between 30 and 40 per cent compared with the US dollar,” Mr Gaurav says. “Similarly in Mexico, Southeast Asia, South Africa, Japan and India.” Currency fluctuations can leave companies with excess inventory and eroded margins.

Many supply chain problems are caused by industrial action. Much of the supply chain is floating on the ocean, says Mr Gaurav, so port strikes can delay shipment of goods and parts and thus the manufacturing process.

Customers are increasingly part of the problem, says Mr Gaurav. “Consumers are also triggering more volatility because they have access to so much information for decision making that they have become more fickle and there is a lot less brand loyalty.”

Additionally, today’s tougher regulatory environment can raise issues further down the supply chain, says French Caldwell, a senior executive with MetricStream, a supply chain compliance software company. Organisations are increasingly being held responsible for the actions of their suppliers, he says. “You can no longer claim to be unaware if your supplier breaches regulations on product specification or workplace safety.”

However, the primary risk is not knowing who you are really doing business with, says Mr Caldwell, and whether companies lower down the supply chain have an effective risk programme in place and follow rules and regulations. Third party suppliers with poor security standards, for example, can prove to be a weak link in defences against cyber criminals.

Suppliers can pose particular risks to a company’s reputation. Apple suffered a rash of bad publicity in 2010 following 14 suicides at Foxconn, its biggest supplier in China, and again last year when workers at another of its Chinese suppliers were filmed falling asleep at work.

Retailers such as Primark were heavily criticised after the collapse in 2013 of Rana Plaza. The disaster in the a poorly constructed building in Bangladesh that housed overcrowded garment factories killed more than 1,100 people and injured many more. Primark, which is based in the UK, paid out millions of pounds in compensation as a result.

Customers want to know that workers have been treated fairly

“Increased enforcement of regulation might lead to large fines,” Mr Caldwell says, “but the bigger impact is that on brand and reputation. Customers want to know that workers have been treated fairly.”

Many companies admit ignorance of regulatory breaches in their supply chains. In the case of minerals mined in regions of the world where there is armed conflict, for example, a survey of global businesses conducted by MetricStream found that more than 80 per cent said it would take a significant effort to meet the requirements of EU legislation on conflict minerals approved last year.

Companies blamed the complexity of their supply chains and the inadequacy of supplier responses to their own enquiries. 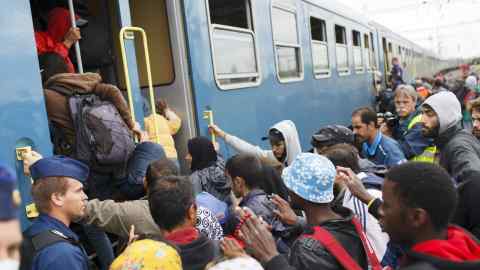 To tackle the problem, organisations often use multiple spreadsheets, but this approach is hard to keep up to date and is “very primitive” says Mr Gaurav. “People also carry lots of knowledge in their heads, but heads and spreadsheets are no way to manage supply chains, you need to automate.”

Software can help by enabling organisations to streamline supplier information into a single system. This can automatically request suppliers to provide relevant certifications and documentation from their auditors to show the rules are being followed by all in the supply chain.

You can then segregate suppliers based on risk, says Mr Caldwell, and focus more attention on those that represent the biggest threat, perhaps making site visits.

Predictive analytics can also help to mitigate supply chain risk, says Andrew Fowkes, head of retail centre of excellence at SAS, a business intelligence software company. Nestlé, a global food and drinks company based in Switzerland, is using SAS algorithms to improve the accuracy of demand forecasts across hundreds of its products, from pet foods to ice cream.

“We have made advances in statistical analysis, taking into account seasonal impact at a more local level,” Mr Fowkes says.

Carmaker Volvo is applying SAS software to its fleets of trucks and buses to replace parts before vehicles breakdown. It analyses more than 100 parameters to predict the wear on a component, identify abnormalities and speed up the diagnostics of incidents affecting vehicles.

RFID tags and sensors on goods in transit can also raise alerts when product quality is threatened by, for example, warning that the refrigeration unit on a truck has failed, so potentially damaging foodstuffs. Analytics can also be applied to meteorological forecast data to predict possible shipment delays caused by storms at sea.

Two years ago the ability to assess the impact of weather on a container ship heading to Rotterdam did not exist, says Mr Gaurav. “Now it does, and the technology will continue to improve.”