South Africa to respond to Trump claims on farm seizures

Rand hit by prospect of strained relations with US

Joseph Cotterill in Johannesburg and Cat Rutter Pooley in London

South Africa said it was seeking diplomatic clarification about a tweet by US President Donald Trump falsely claiming “large-scale killings” of farmers in the country.

A spokesperson for South African President Cyril Ramaphosa said he had directed the country’s foreign ministry to respond after Mr Trump tweeted that he had ordered Mike Pompeo, the US secretary of state, to investigate.

The policy, which may need constitutional change, is seen in the ANC as necessary to accelerate slow progress in raising black ownership of the economy after apartheid, when the white minority regime stole land. 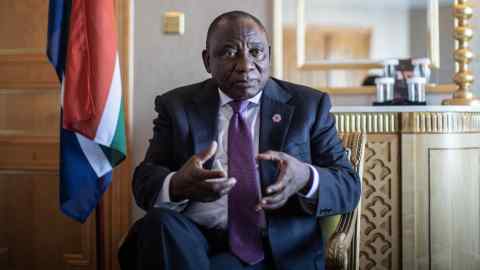 Some land reform activists say that the expropriation debate is a “red herring” given other thorny challenges such as failures to support black farmers, reform exploitative tenancy laws, and tackle the abuse by traditional chiefs of land they own.

Mr Trump tweeted that “South African Government is now seizing land from white farmers” after a segment on a Fox News television show. Expropriation without compensation has not taken place.

Studies have disproved claims of widespread farmer killings in South Africa, made by white nationalist groups in the US.

Agri SA, a farmer organisation, said in May that farm murders were at their lowest level in two decades. There were 47 murders between 2017 and 2018 compared to 66 the year previously, it said.

Mr Ramaphosa has proposed the expropriation of land without compensation as one measure in a broader package of reforms.

On Thursday, the South African president set out the case for land reform in the FT. He described “reform of patterns of land ownership in South Africa is a critical issue”, continuing:

That is why the government has embarked on a process of accelerated land reform and why South Africans are currently engaged in an intense debate over the prospect of expropriation of land without compensation as one among several measures to achieve this reform.

Unfortunately, several commentators have confined their engagement on this matter to soundbites and not to the substance.

The rand fell against the dollar, trading around 1.6 per cent lower on the day at 14.3945 rand per dollar.