Bullish international investors have long ignored screenwriter William Goldman’s warning that “Nobody knows anything” about success in Hollywood.

Over the past 25 years, investors from Japan, France and later India have arrived in the entertainment industry capital in waves, convinced that their cash and know-how could unlock untapped Tinsel Town riches.

Now it is China’s turn, with its companies involved in a flurry of recent Hollywood deals. Tang Media Partners, created by businessman Donald Tang and backed by Tencent, the Chinese internet group, last week announced the purchase of IM Global, a Hollywood film financier and sales agency, in a deal that also involved Li Ruigang’s China Media Capital and the Huayi Brothers media group.

The IM Global acquisition came five months after Dalian Wanda, the property and media group controlled by Wang Jianlin, China’s richest man, paid $3.5bn for a controlling stake in Legendary Entertainment, which has produced films such as Godzilla and Pacific Rim. 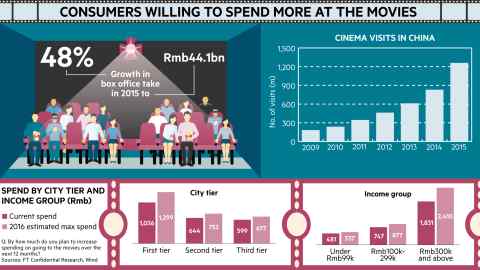 These two investments join a wave of other Chinese forays into Hollywood. CMC’s Mr Li has done deals with movie studio Warner Brothers, while state-controlled group Hunan Television and Broadcast has put money into Lions Gate Entertainment, the studio behind The Hunger Games films and television series such as Mad Men.

Some of the Chinese groups are buoyed by high valuations in mainland stock markets and able to splash out at high prices. Others want to invest outside of the country ahead of future currency devaluations, analysts say.

Chinese investors are also seeking to tap into US expertise at a time when the rising middle class in China is seeking entertainment and per capita income has grown 20-fold in a generation. In 2014, US filmed entertainment generated a trade surplus of $16.3bn, according to the Motion Picture Association of America.

There is significant growth to be had in the Chinese movie market. The box office there has defied the slowing economy with multiplex construction continuing to add screens to a cinema market that will surpass the US and become the world’s largest by 2017, according to PwC.

The Beijing government has also been generally supportive of outbound investment aimed at providing entertainment and services to Chinese customers, three bankers and investors with experience in the sector say.

For their part, Hollywood companies have been open to Chinese investment because in some cases it helped them get around the quota system that has limited their ability to show films on the mainland.

“This is the proven Chinese model: use deals with global players to build up capabilities [and] support a robust and strong Chinese domestic business that can compete head to head with foreign companies,” says Christopher Vollmer, global entertainment and media advisory leader for PwC’s Strategy& consultancy.

Rivalries and alliances on the Chinese mainland are now being played out on both sides of the Pacific, with some of the biggest internet and entertainment companies circling Hollywood.

After last week’s Tencent deal, rival Alibaba is said to be among the possible buyers, along with Wanda, of a possible sale by Sumner Redstone’s Viacom of a minority stake in its Paramount Pictures studio.

It is too early to tell if Chinese investors will avoid the largely miserable experiences of other international buyers. In 2008, when an Indian group controlled by billionaire Anil Ambani invested in Steven Spielberg’s DreamWorks studio, a local mogul observed: “Hollywood has a long, distinguished record of eating up foreigners and then spitting them out”.

The first big wave of international investment came from Japan in 1989 when Sony, keen to avoid a repeat of its failure with the Betamax video format, paid $3.4bn for Columbia Pictures and its sister company, TriStar Pictures. It renamed the studio Sony Pictures Entertainment and hired Jon Peters and Peter Guber, a pair of producers fresh from two of that decade's biggest hits — Batman and Rain Man.

Mr Guber and Mr Peters became known for their lavish spending and presided over a string of flops. Sony eventually wrote off more than $3bn in losses related to the acquisition.

Matsushita of Japan had no better luck. In 1990 it purchased Lew Wasserman’s MCA Universal — later renamed Universal Studios — in hopes of using the studio’s content and theme park to drive sales of its electronics goods. But as the Japanese economy hit the skids, Matsushita cut its investment and sold the company after only five years.

Jean-Marie Messier, the flamboyant former chief executive of Vivendi, the French utility, also came a cropper in Hollywood, buying Seagram — which had acquired Universal from Matsushita — in 2000. However, he was ousted from the company’s board and the businesses he had assembled were broken up a few years later.

The $325m investment by Mr Ambani’s Reliance Big Entertainment in 2008 was supposed to herald a new era of co-operation between Hollywood and the Indian film industry. But despite the tie-up with Mr Spielberg’s DreamWorks, Reliance has failed to release a consistent number of hits.

Now the Chinese have arrived. CMC’s Mr Li, who was part of the IM Global deal, is among the most active mainland investors in Hollywood. He created Flagship Entertainment with Warner Brothers to co-produce films and recently took a stake in Imagine Entertainment, a production company led by Ron Howard and Brian Glazer that made the film In the Heart of the Sea. 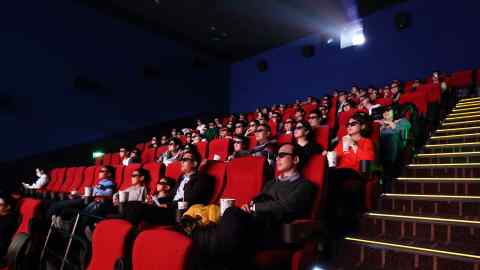 The current string of Chinese deals may be fated to become the latest punchline in Hollywood jokes about “dumb money” offered by cash-rich but naive overseas investors.

But some think that this time could be different, in part because of the focus on acquiring content rather than on studios per se.

“With the Japanese it was all about trophy assets,” says an advisory banker in Hong Kong. “This is about content.”

After all, Chinese investors in Hollywood have several things in their favour, notably a direct route into their home market.

China is “hungry for filmed entertainment product and is still growing,” says Mr Vollmer. Chinese investors in the US “are already earning a reputation in Hollywood for being strategic, analytic and long-term focused.” he adds. “Many of the requirements for success appear to be present.”

When Wang Jianlin, the founder of Dalian Wanda, decided to buy cinema chain AMC in 2012, AMC and its part owner Apollo Global Management reached out to Donald Tang, the former head of Bear Stearns Asia and a long-time resident of Los Angeles, for advice, writes Henny Sender.

That transaction began a Hollywood land grab by Chinese entrepreneurs, and Mr Tang, who grew up in Shanghai but has deep relationships with the movie industry since moving to LA in 1982, sits at the middle of many of those flows. Recently, he has made the transition from being adviser and banker to being an entrepreneur in his own right.

His company, Tang Media Partners, enjoys the backing of some of the most powerful media players in China including CMC, Huayi Brothers, and Tencent with its $200bn market cap and insatiable appetite for digital content. Last week, Tang Media Partners bought IM Global, a small Hollywood studio.

The stakes — and the price tags — for Chinese investors have been and will continue to rise. And if Chinese buyers are to avoid the cultural challenges faced by Japanese investors who bought Hollywood assets in the 1908s they will need people like Mr Tang, a denizen of both worlds.

Aside from his understanding of how both sides think, Mr Tang speaks English fluently — though that was not always the case. When his girlfriend (now wife) moved from Shanghai to LA, Mr Tang, then a lovesick 17-year-old, called the emergency number of the US consulate in Shanghai to urgently request a visa. Since he knew no English he could not apply for a student visa. Fortunately, the consul general spoke Chinese and took pity on the hapless young man. Eventually, Mr Tang applied to a language school in California and arrived in the Golden State with $20 in his pocket — the most the Chinese government then allowed its citizens to take out of the country.

Mr Tang believes that within 10 years, “of the six major studios, maybe two will have Chinese names on them. The Chinese market is so big and their desire is so big to learn the storytelling magic”.

That is why he has linked up with Tencent for a TV joint venture. “Tencent is a social media company. They care about access to the best content,” he says. “We have to make sure China doesn’t learn Hollywood’s bad habits.”