Draft deal is the most ambitious, and politically explosive, plan to solve EU refugee crisis

It may be politically explosive, but the concept behind a plan crafted by Germany and Turkey to end Europe’s migrant crisis is breathtakingly simple: any migrant arriving on a Greek island would be returned to Turkey.

The hope is that the initiative will short-circuit irregular migration into Greece — currently running at 2,000 arrivals a day — and create a more orderly process to reach Europe.

But even though the plan has been broadly agreed, it must still overcome five big political, legal and logistical hurdles.

The legal problems with mass returns

Rules on asylum are clear: all applications must be properly considered, and an asylum seeker should not be returned to a country that does not offer proper protection.

Refugee groups argue that returns to a country that is not a full member of the Geneva Convention, such as Turkey, would probably be illegal. On Tuesday, Amnesty International labelled the proposed deal a “death blow” to the right to seek asylum while Filippo Grandi, the UNHCR chief, said he was “deeply concerned”.

The EU will try to ease such concerns by having Greece declare Turkey a “safe” third country, which — given the state of its asylum system — is debatable.

Despite its legal ingenuity, some EU officials believe the proposal would give the bloc a legal basis to return only Syrians to Turkey. Therefore, it should not apply to non-Syrian asylum seekers, they argue. But Dutch and German officials are adamant that it cover all arrivals.

In either case, the deal would struggle to survive if it goes before Europe’s courts, migration lawyers warn.

The fraught politics of a 1:1 resettlement promise

Turkey’s price for accepting mass returns of irregular migrants is a huge resettlement programme. Europe would need to open up a legal route for asylum, which takes an equivalent number of Syrians directly from Turkey. This is an explosive concept in many EU member states.

Angela Merkel, the German chancellor, has always been keen on the idea and, since November, her officials have informally toyed with taking 200,000 or 300,000 refugees on a bilateral basis. Berlin insisted, though, that could only happen if Turkey proved irregular migration had all but stopped.

Video: Why Brussels is tearing up the asylum rules

More challenging will be convincing any other EU country to join the cause. A “coalition of the willing” has proved elusive. The Netherlands is potentially supportive, as are a handful of other small member states. But there are no commitments on numbers. One senior diplomat warned the concept could be “a real killer” for the deal. Some diplomats think it may even require a mandatory quota scheme to govern the resettlements — a step that Viktor Orban, Hungary’s prime minister, has already promised to veto. 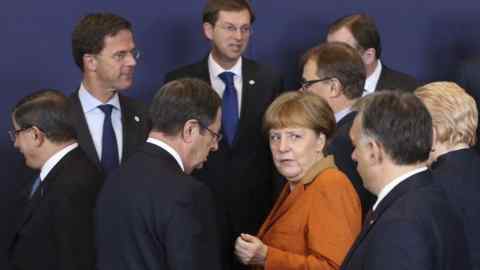 Ironing out these large kinks will fall to European Council president Donald Tusk, who has 10 days to come up with a solution. For any plan to work, Germany may need to lead by example.

The tricky politics around visas for 75m Turks

Recep Tayyip Erdogan, Turkey’s president, prizes visa access perhaps more than anything else in the package, according to senior diplomats. It is a tangible vote-winner at home. The trouble is that it is also a vote-destroyer for many EU leaders, who would take a beating on their right flank for giving 75m Muslims automatic access to the Schengen passport-free zone. France, which has presidential elections next year, is particularly wary.

The big-bang migration deal rips up an agreement to look at the visa liberalisation in autumn. Instead, this will be done in June and, rather than recommend mere “liberalisation”, the full privilege of automatic Schengen visas could be granted to Turkish citizens.

Turkey must still fulfil strict criteria even though some EU officials think there will be huge pressure to, in effect, abandon their demands.

There are also big political issues that would be hard to finesse, not least the requirement for Turkey in effect to recognise Cyprus and its Greek-Cypriot government in Nicosia.

In spite of the obstacles, expectations have been raised in Turkey. Ankara has long made clear that its willingness to accept migrant returns is ultimately tied to the EU granting Mr Erdogan’s long-sought visas.

Ankara wants to revive its EU membership talks by reopening several accession chapters, the legal hoops a country must jump through before it can join the bloc.

But Cyprus and a group of other countries are unwilling to open the process until Turkey recognises the government in Nicosia. This is a sensitive issue at a sensitive time, with peace talks to find a settlement on the divided island making significant headway after four decades of enmity.

Turkey has eyed five chapters in the accession process. The outcome is largely symbolic — no member state believes that Turkey is close to being a viable candidate. But the political symbolism makes compromise difficult nonetheless.

Moving people against their will is hard. The arrival of 2,000 people on Greek shores every day is leaving officials with a logistical and legal nightmare.

Having spent up to €1,000 to make the trip, asylum seekers will be reluctant to be sent back to a country they paid — and risked — so much to leave. EU leaders should be prepared for the news to be greeted by very ugly scenes — particularly as those being returned will be aware of the questionable legal grounds of this decision.

The deal also heaps huge pressure on Greece. During the peak of the crisis last autumn, Greek officials struggled to even fingerprint and register migrants, often still distressed from their journey. Sending them back is an even more difficult proposition.

Get alerts on Greece when a new story is published