Zombie ideas about Brexit that refuse to die

It is highly likely that the Brexit negotiations will fail, imposing an abrupt shock on the UK economy and ruining relations with its neighbours. This view is condemned by those who insist we must be more positive. That is like advising someone who has just jumped off a building that, if only he thought positively, he could fly. To understand the state we are now in we need to understand the zombie ideas that hold so many Brexiters in their grip.

The first such idea is that the EU is being unreasonable in insisting that the broad terms of the divorce (if not the details) are settled before moving on to transitional arrangements. David Davis, who is in charge of the negotiations for the UK, complained to the House of Commons that “they are using time pressure to see if they can get more money out of us. Bluntly that’s what is going on — it’s obvious to anybody.” Indeed, it is. Stop complaining: that is what strong parties do.

A linked zombie idea is that the UK is really in a stronger position than the EU, because it runs a trade deficit with it. But, even in goods, UK exports to the EU are three times more important to the UK’s economy than vice versa (7.5 per cent of gross domestic product against 2.5 per cent). Even without the UK, the EU remains the second-largest economy in the world, with an economy almost six times bigger, at market prices, in 2016. The UK is negotiating with an economic superpower. How does that feel? Just ask the Canadians, now negotiating with the US over the North American Free Trade Agreement.

Even the notion that the EU’s priorities are unreasonable is a zombie idea. It makes sense for the EU to insist that the issues of money, Ireland and EU residents in the UK be dealt with, at least in principle, before moving on. It also has good reason to feel that the UK’s suggestions on the first two are inadequate or incoherent. Despite Theresa May’s helpful speech in Florence last month, the UK has not indicated in any detail what it thinks it owes: Boris Johnson’s statement that the EU can “go whistle” for money is characteristically unhelpful.

A further zombie idea is that the UK economy is a powerhouse. A reading of the latest economic survey from the Organisation for Economic Co-operation and Development demonstrates how delusional this is. The UK has a good employment record. But its average productivity is at best mediocre and its productivity growth post-crisis is in the basement, down there with Italy’s. Investment is weak and relative export performance consistently dismal. Contrast Germany. Debt-fuelled consumption kept growth up after the Brexit referendum. But real wages are now falling and growth has weakened, partly due to the dawning reality that Brexit is likely to be ultra-hard, despite the chancellor Philip Hammond’s justified efforts to prevent this disaster from happening.

Yet another zombie idea is that the UK can survive quite well without a favourable deal with the EU or a transition to such a deal. It can, we are told, trade perfectly well on World Trade Organisation terms. In any case, trade with our neighbours just does not matter that much. But, as Mark Carney, governor of the Bank of England, has rightly noted, the initial impact of Brexit will be “deglobalisation”, not a “global Britain”.

This is self-evident. It is also impossible to compare today’s intra-industrial trade, particularly within supply chains, with the inter-industry trade of the 19th century, as some now do. In trade today both proximity and regulatory barriers matter. It will be impossible to offset the loss of favourable access to EU markets, which now take some 40 per cent of the UK’s exports. Even to start on this, the UK would have to reach favourable deals with the US, China and India, the actual and potential superpowers. In all such negotiations, the UK will be very much the weaker party. Talks would be brutal.

Yet another zombie is the idea that it will be possible to shift smoothly to WTO terms for trade with the EU. All procedures governing trade with the EU would need to be refashioned. That would take the enthusiastic co-operation of partners who will regard the UK as something like a pariah. Why should anybody think they will make it easy for the UK?

The last zombie is the idea that those who deny the claims of the Brexiters are “traitors” or “saboteurs” working against “the will of the people”. This is despotism. In a liberal democracy, we are all entitled to our opinions and to seek to overturn what we consider grossly mistaken decisions. The saboteurs are those whose zombie ideas have brought the UK to a ruinous break with its neighbours and natural partners. It is our right to argue this. And we will.

To receive alerts when Martin’s articles are published, go to his page here and click “add to myFT” 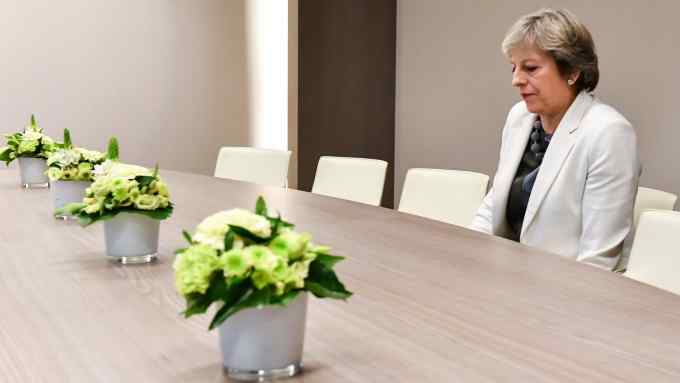 More than a year after the referendum, the UK cabinet is bickering and the country is still divided, while the EU27 are unanimous and inflexible. A deal looks elusive. How nasty will the talks turn? Here’s the best of this week’s comment and analysis