“It feels a bit surreal to think that the UK could be outside of the EU. I’ve been here 12 years and I feel a Londoner even though I’ve kept my links in Paris,” says Nicolas Petrovic, Paris-born and educated, who runs Eurostar, a corporate symbol of European integration.

Professionally and personally, he hopes that Britain will not leave the EU.

Mr Petrovic believes that the French community in the UK — estimated at 300,000 — has not really absorbed the potential consequences of a Brexit. But others in the community are more vehement on the topic.

A French national who has lived in Britain for the past 30 years, Ms Connell runs France in London, a website about the French products, schools, and films available in the city. She would remain in the British capital if the UK votes on June 23 to leave the EU — “my house is here, my family is here”. But she adds: “Some people are saying . . . they can’t imagine staying if that happens.”

Ms Connell, like many of her compatriots, says she has only just woken up to the possibility that the British might choose to go their own way. Even the French consulate in London has not started working on the consequences of a Brexit on the community.

“Everybody thought it was never going to happen,” agrees Olivier Bertin, who runs a school and art gallery in London. He organises guided French-speaking walks in the English countryside, and is also an elected member of the body that represents the French abroad, the Assemblée des Français à l’Etranger. With opinion polls suggesting the result of the EU membership referendum is finely balanced, he explains: “Suddenly you look at the figures and you think, hang on a minute, this isn’t black and white.”

Other French business people in the capital are less concerned. Arsène Colarossi runs Breteuil, which rents high-end properties in central London to the French community and describes itself as “the most British French estate agency”.

He says he has not noticed any reduction in demand because of the coming vote, pointing out that the British capital “is already the most internationally diverse property market”.

Mr Colarossi and Mr Bertin operate at the epicentre of the UK’s French community in South Kensington, home to the French Lycée, the French Institute and numerous French shops, cafés and businesses.

Brexit
Wake up — Britain is heading for Brexit 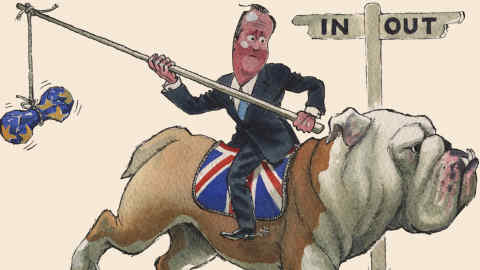 The French consulate in London says there are more than 3,000 French businesses employing nearly 400,000 people in the UK. By 2012, according to the French national statistics office, the UK was France’s most significant economic outpost, with French companies in Britain turning over €120bn annually.

In recent years, as the French population has grown, it has spread south of the river Thames to Battersea and west to Fulham, spawning nursery schools and restaurants as it goes.

Many French expats — perhaps a third, according to estimates — work in the City. But Mr Bertin says that, although French financial services workers fear their jobs may move to other countries, they are even more worried about their London support system.

“They are very concerned with the nannies and all the staff who work with their children. If they go to a British school they want tutors who will speak French to their children.”

Philippe Fraser, who is half French himself, agrees that the French-speaking network is likely to be badly affected by a Brexit. He runs Les Petites Etoiles, three bilingual nurseries in north London, and the parents of his 120 charges work mainly in the City.

Mr Fraser says a mother whose child was offered a nursery place in September has postponed paying her deposit, despite the risk of losing the place, until the outcome of the referendum is known. But parents leaving in the event of a Brexit is not his main worry.

“French bankers will find a place in the City even afterwards,” he says. “But I am more worried about finding the staff I need. How am I going to recruit French speakers?”

Mr Fraser’s nursery teachers typically come to the UK for a year or two to improve their English and then return to France and, much as he would like to be able to recruit non-EU staff, he says it is too difficult. He would love to be able to employ Montessori-trained staff from Canada but immigration rules mean he is not eligible to sponsor them. And he has decided not to diversify by opening a Mandarin nursery — although there is great demand for one — because of the difficulties of recruiting non-EU staff.

Mr Bertin shares these worries. His staff generally work in restaurants in central London, brushing up their English, before moving to a teaching role. Plans to invest in a new school have been delayed until he knows the outcome of the referendum.

“We put on hold all the projects we have,” he says. “We don’t want to invest any money in London if we are leaving.”

For one French banker at a London-based US investment bank, the support jobs depend on the financial services jobs.

“We look into the issue of employment after a potential Brexit, and we don’t know how to quantify it,” he says.

“Any doubt as to access to the single market would be negative for employment. My working assumption is that I would still be able to work in the UK — but the question is what my company would do.”

The banker’s personal and professional worries, like many in his community, are intertwined.

“My son has never been to a French school. He was two when we moved over, and having to start again in Paris would be very complicated for him,” he says.

“A lot of us love living in the UK and do not really think about going home. I’ve yet to meet someone who says ‘Oh great, my job is going to be shipped back to Paris’.”

French citizens cannot vote in the EU referendum in June, although Mr Bertin has signed a petition to give EU citizens living and working in the UK the right to do so.

A poll of foreign businesses operating in the UK is being organised by the Council of Foreign Chambers of Commerce, which includes France, Germany, Italy, Canada and others, to garner their views on Brexit.

“It is not for us to tell the British how to vote but we feel that the voice of foreign businesses in the UK, which represent a significant amount of jobs and investment, should be heard,” says Florence Gomez, managing director of the French Chamber of Commerce in Great Britain.

Meanwhile, applications for British citizenship from French residents in the UK have surged. Mr Bertin applied successfully a year ago and will vote in June’s referendum. Mr Fraser says he knows of customers who have done the same, but hopes such measures will prove unnecessary.

“Part of me is still in denial,” he says. “The idea that the UK would choose to turn inwards is depressing.”

It is a sentiment the French investment banker shares, saying it would be a “nightmare” to leave.

“I have to say that when the plane lands in Heathrow, emotionally this is where home is,” he says.