Collector Patrick Sun on the fight for LGBTQ rights in Taiwan

Art collector Patrick Sun has three homes: one in Hong Kong, where he was born and grew up, one in Taipei where his partner lives, and a third in Bangkok. “So I’m always flying between the three!” he laughs.

His money comes from real estate, having founded Kinwick Holdings Ltd in the early 1980s (“I’m a property developer, but a very lazy one,” he claims), but his drive lies elsewhere: in using art as a force for social change.

Yet there is nothing of the dour campaigner about Sun: with his small goatee beard, neatly cropped hair and ready smile, he is cheerful and, most importantly, optimistic — about the way art can help the LGBTQ community.

We are talking over Skype: it’s late in Hong Kong, and early for me in London. Sun starts by explaining how, when he started collecting back in 1988, he focused on Chinese ink paintings, choosing traditional subjects such as landscapes or people. His very first acquisition showed a couple of rotund youngsters gleefully eating a stolen watermelon behind a garden wall.

Then, in 2014, he started the Sunpride Foundation and decided on a new focus: “gay Asian art”, shifting to contemporary art from across Asia. But even before that, he had been promoting equal rights for the LGBTQ community in Hong Kong and Taipei.

“Using this particular focus, the mission of the foundation is to foster a stronger, healthier and more equitable world for the LGBTQ community,” he explains, “through the preservation, collection and exhibition of art.”

The law is one thing, but social acceptance is another. Art is a good way to communicate …

One of the most popular works in the show was by the Taiwan artist Chuang Chih-Wei, “Rainbow in the Darkness”, consisting of large, black-painted boxes. The public could scratch the surface to reveal rainbow decoration inside. Another was the Hong Kong artist Samson Young’s “Muted Situation #5: Muted Chorus”, a video showing a choir performance without the music — so you could hear just the singers breathing, the movement of their bodies and the rustling of scores.

“We had actually been preparing the show for two years before, long before Taiwan’s top court ruled in favour of gay marriage [in May 2017],” says Sun. “So the timing was good, and it went down very well.” And while a recent referendum in Taiwan saw a vote against this new legislation, Sun remains upbeat. “I think we will get the law, perhaps not exactly in the form we want, but it’s heading in the right direction.”

The same thinking underlies the Foundation’s next show. Held in the Bangkok Art and Culture Centre (BACC) from November 23 to March 1 2020, Spectrosynthesis II — Exposure of Tolerance: LGBTQ in Southeast Asia will focus on South East Asian artists.

I ask what progress is being made in the acceptance of the LGBTQ community in Asia. “Thailand is progressive, but there are still countries where homosexuality is illegal,” says Sun, citing Butan and Bangladesh. “Or even punishable by death, as in Brunei.

“The law is one thing, but social acceptance is another. I believe that art is a good way to communicate with people, and that’s what I hope to achieve,” he says. He does see things changing — “Look at India, where they have just decriminalised homosexuality!” Ever the optimist, he continues: “There is a long way to go but I believe we are on the right side of history — equality will eventually be achieved, so it’s a matter of time — that’s what I am doing, trying to change the social perception.”

Sun recounts a touching anecdote about his 99-year-old father, who comes from a conservative background and who was very angry when his son came out. Sun explains, “After many years of avoiding the subject with him, knowing that the media would report on my Taipei show, just before it opened I asked his carer to explain about it — I aimed to ‘soft land’ it. But my father wanted to see the show! I walked him through it with the curators. I don’t think he understood everything, but the fact that it was government-endorsed, in a public institution, meant for him that his son was doing something right. And that is how art can communicate to anyone — even your parents!”

His focus on gay Asian art also has advantages he never imagined. “Galleries and auction houses remember me, and so many people have gone out of their way to help me. Collecting art has opened up my world, made it so much richer!” he concludes.

Explore the series
READ MORECollecting: Art in East Asia
Collector Patrick Sun on the fight for LGBTQ rights in Taiwan 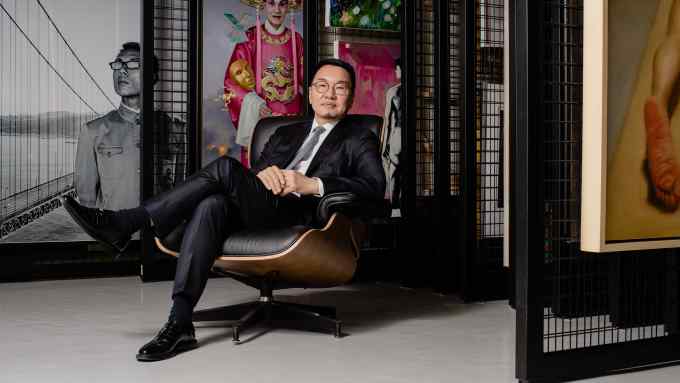