My personal style signifiers are dark suits, white shirts and ties – and maybe a fun pocket square or cufflinks for colour. I’m a news anchor, so this is my go-to uniform. I’ve recently started wearing glasses on air as well. My wife bought me a pair of Dita Statesman Three glasses and I find that it’s just easier to keep wearing them than remembering to take them off between segments. £535

The last thing I bought and loved was a pair of Grogu – or baby Yoda – cufflinks. I’m a big fan of the Star Wars spin-off series, The Mandalorian, and I’ll wear these on air. I also have a pair in the likeness of my dogs, Winston and Clementine. I got them for my birthday from a viewer who knew that I love cufflinks. $70.99, shopdisney.com

On my wishlist is a vaccine for my wife, Jennifer, and my kids. That’s all I really want. And some plane tickets to Idaho or Wyoming for a family summer vacation would be great as well. I have to admit that other than that I’m pretty content.

The best souvenir I’ve brought home is… a long story. I wrote a book in 2012 about Combat Outpost Keating in Afghanistan but I was never able to actually get there. A soldier friend of mine brought me some earth from that spot, and when the book was made into a movie [The Outpost], my family and I went to Bulgaria for the shoot. My kids collected dirt from the set, and we combined it with the actual dirt from the camp, and my father-in-law made souvenir pens using the mixture that are a tribute to this battle, the soldiers who died and the Gold Star families who lost loved ones.

On my wishlist is a vaccine for my wife, Jennifer, and my kids

The last item of clothing I added to my wardrobe was probably a tie. I have solids, prints, florals, wacky ones – though not Al Yankovic wacky – more conservative styles, and of course Yoda and Millennium Falcon ties because I love all things Star Wars. I buy mostly from Bonobos or Suitsupply.

A recent find is MyHeritage.com. There is a cool part of the app where you upload a photo – say, a family member from the 1800s – and you can enhance the quality, add colour and, using some AI, even animate it. It produces this little video of an older relative, or someone you’ve never even met, and I now do this randomly for people, even Twitter followers. Today I made one for Ken Vogel of The New York Times based on a picture that he’d posted. Sometimes the animated versions freak people out, but I love how it brings history to life.

The best gifts I’ve given recently are rods and reels to my kids, who are 11 and 13 years old, so that we can learn how to fish this summer. We know the basics, but we’re going to learn how to do it properly using nightcrawlers and lures. My daughter, Alice, got a pink one (please note: at her request) and my son, Jack, got a camo spinning combo. We’ll see if our activity merits this kind of detail. dickssportinggoods.com

And the best gift I’ve received is an acoustic guitar from my friend [and TV host] Jimmy Kimmel. It’s made by Rockbridge Guitar Company. Dave Matthews also owns one, and Jimmy knows I’m a huge Dave Matthews fan so this was very special. I can’t really play it, but I did download the app to learn at the beginning of the pandemic, like everyone else. It’s sitting there just waiting to be played. rockbridgeguitar.com

The last music I downloaded was Shoot for the Stars, Aim for the Moon by American rapper Pop Smoke. Everyone was talking about this posthumous album, so I was interested. I’m generally more of an old-school-rap kind of guy: The Sugarhill Gang, Warren G, Biggie, Tupac, Melle Mel, the Beastie Boys.

I have a collection of posters of losing presidential candidates. It started with George Bush’s 1992 poster. It seemed amusing and historical to me, and so I started adding posters from earlier elections too, such as an “Al Smith for President” banner. As far as I know, it’s the only collection of its kind. US presidential history is fascinating; Strom Thurmond was a horrible person and I don’t like what he stood for, but in terms of memorabilia, this poster was very tough to get. Of course, because I don’t like what he stood for, I put a few posters of revolutionary black candidates on top of it – Eldridge Cleaver and Shirley Chisholm. I’ve got a Henry Clay from 1848, and a Stephen Douglas from when he ran against Lincoln, but I’ve run out of wall space so I am toning down the collecting now. I source from eBay and auctions, and sometimes I receive gifts from people who know about my passion. I just got a Trump 2020, which I might put next to my Hillary Clinton.

My style icon is difficult to choose because at heart I’m a jeans and T-shirt guy, but if I had to look like anyone in a suit it would be Cary Grant, because he always looked perfect and yet his style appeared effortless. To be clear, I am nowhere near this.

The best book I’ve read in the past year is maybe Shaker, a novel by Scott Frank, the writer and director of The Queen’s Gambit. But there are so many: Win, which is a mystery by Harlan Coben; Just Like You by Nick Hornby; The Law of Innocence by Michael Connelly; Where the Crawdads Sing by Delia Owens – and I would recommend them all. I always have to be reading something and since my life is full of non-fiction, I prefer fiction. It’s the same with my TV consumption: no news, only drama and comedy.

An indulgence I would never forgo is bourbon on ice. I’ll try any bourbon.

The technology I couldn’t do without is an app called LiveAuctioneers that lets you join an auction live. It’s how I’ve found some of my most prized presidential posters and other interesting stuff. I couldn’t do without it because it’s constantly changing and always fascinating – the competitive bidding really gets the adrenaline going. My wife would prefer I delete it.

An object I would never part with is my grandmother’s collection of Winston Churchill books. She was Canadian and my grandfather was in the Canadian Navy during the second world war. She revered Churchill and his leadership during the war. I’ve added significantly to the collection over the years and I hope to pass it on to my kids. In a perfect world I could show her how I’ve built on her collection.

In my fridge you’ll always find hard-boiled eggs because they are the perfect snack food that’s also healthy. If I’m hungry and I don’t want to eat a bag of barbecue potato chips or a sleeve of cookies, I try to head it off at the pass. There’s always cheese, berries and yoghurt for my daughter, and salami for my son. Since we’ve been at home more, I’ve tried to master cooking a few Jewish delicacies – latkes for Hanukkah, hamantaschen for Purim – as well as Korean barbecue. But I’m more of a grill guy really, especially in summer.

My favourite room in my house is my TV room. My wife has decorated it to feel like a ski chalet; I’ve added a giant moose doll. There are lots of blankets and it’s very cosy and we all have different names for it: the kids call it the family room, my wife the living room and I the TV room, but it’s where we are. It’s where we binge The Rookie – peace on earth.

I’ve recently rediscovered the music of Bill Withers, who died last year. He was just an incredible talent. I read in his obituary that he felt he was underappreciated and he definitely was. His albums are perfect for listening to on my commute to work or while exercising.

My grooming and wellbeing people are Mesut at the Violet Salon in Georgetown, who cuts my hair every two to three weeks. Pre-pandemic, I trained at a local gym on Capitol Hill called Balance with Mike Holmes. We’ve stayed in touch this whole time and when I’m vaccinated, I’m eager to get back to it.

The place I can’t wait to go back to is St Thomas, in the US Virgin Islands. This was the first trip my wife and I took together, and the island holds very special memories. We’ve since taken trips there as a family and it’s really the perfect destination; it’s not too far from the US, you can island hop, there are great restaurants, as well as adventures such as snorkelling and fishing. We haven’t had a family adventure in a long time, so when it’s safe to go, I’m looking forward to returning to Marriott’s Frenchman’s Cove resort with my kids. It has a pool slide – it’s the simple pleasures these days, right?

My favourite websites and apps are the obvious major news and social media sites, as well as The New York Times crossword, Word Stacks and WordSpace. I also like Spelling Bee. When it comes up on my phone how much time I’ve spent on Spelling Bee at the end of the week, I realise this is what I’ve been doing. 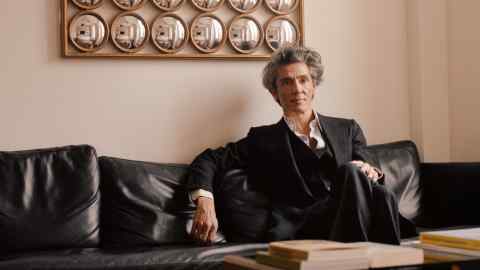 The one artist whose work I would collect if I could is Vincent van Gogh – and specifically, Starry Night. It’s not terribly original, but if money were no object, I’d love this tranquil painting in my living room. It’s interesting that such gorgeous and calm-inducing paintings are by someone who had so much personal struggle. I find his work to be very reassuring.

The podcasts I’m listening to include Conan O’Brien Needs a Friend, Fresh Air and This American Life. It’s all non-fiction, but more storytelling. If I want real news, I’ll just listen to NPR. One of my favourite podcasts is Decoder Ring from Slate, which dives into cultural mysteries and I’m eagerly waiting for the next season to drop.

If I weren’t doing what I do, I would be a novelist. I really do love what I do for CNN, but my first novel, The Hellfire Club, came out in 2018, and the sequel, The Devil May Dance, is coming out in May. It’s set in 1960s Hollywood and mystery ensues. I had a great time writing it. It has allowed me to escape – especially in these past few years – an indecent and ugly political environment, as well as the tragedy and isolation of the pandemic. To be able to walk away and spend a few hours with Frank Sinatra and the Rat Pack in the middle of all that was really fun. I enjoy solving the problems and puzzles thrown up by plotlines, and also delving into history.