We’ll send you a myFT Daily Digest email rounding up the latest Transport for London news every morning.

Ministers are close to striking a £1bn rescue deal for Transport for London — its fourth in a year — under which it will have to accept a further, immediate budget cut and identify new money-raising schemes.

After months of sometimes acrimonious talks between the Department for Transport and TfL, the two sides are close to a deal that will mean the transport authority will have received £4.9bn in emergency funding since the start of the Covid-19 pandemic.

An outline agreement will require TfL — which is chaired by Labour mayor Sadiq Khan — to find £300m savings in the current financial year.

The DfT’s earlier demand for a “recurring” cut of £300m in future years was dropped in the final stages of negotiation. The one-off cut represents about 4 per cent of the authority’s £6.5bn operating costs.

In addition, the government has ordered TfL to identify between £500m and £1bn a year of new annual income-raising measures from April 2023, according to officials on both sides of the negotiations.

These new financial demands come on top of an existing agreement for the transport authority to find £730m a year of annual spending cuts by the middle of this decade.

The rescue package of about £1bn will cover roughly six months of TfL’s budget until the Treasury’s comprehensive spending review at the end of this year.

At that point the authority is likely to need further financial support unless there is an unexpectedly sharp recovery in passenger numbers, which remain severely depressed as a result of the various emergency coronavirus measures.

The 15-month long pandemic has had a catastrophic impact on TFL income. Even if the government lifts the final lockdown restrictions towards the end of June, London’s transport system is expected to remain below-capacity as people continue to work from home.

At the same time, TfL’s debt burden has reached the “limits of affordability”, according to internal documents, which prevents it from borrowing significant sums in future.

Ministers have bailed out the transport authority four times during the pandemic. TfL received £1.6bn in May and £1.8bn in November last year in return for cuts to fare concessions. In March it received emergency funding worth about £500m to support the network until after the May elections.

TfL’s finances were under pressure after the Conservative government gradually withdrew a central grant that used to provide £700m a year. 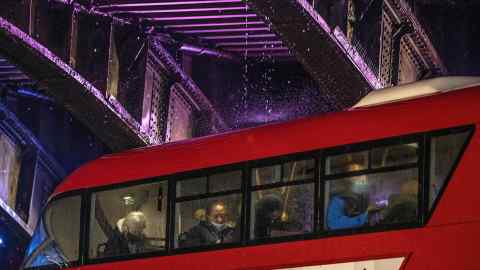 That has left the authority almost entirely dependent on fare income apart from one-off injections of state cash for infrastructure projects such as Crossrail. Khan’s policy of freezing fares over several years has deprived TfL of an estimated £640m in lost income, according to the transport authority’s own calculations.

One government figure said the demand for TfL to identify up to £1bn of annual revenue-raising measures was a “sensible” attempt to put the authority on a secure financial footing.

TfL officials have set out several options including a new Greater London Boundary charge for cars driving into London. Other possible measures involve a big expansion of the capital’s congestion charge zone, extending it to the two inner London ring roads, known as the north and south circular.

Alternatively, fares would have to rise by the equivalent of 17 per cent, which would be spread over several years, or the TfL supplement in Londoner’s council tax bills would increase, equivalent to between £130-£165 annually for properties in Band D.

The government has also suggested Khan could bring in a “tourist tax” or development levies. The mayor has previously proposed that London should keep its share of national vehicle excise duty.

Meanwhile, ministers are ordering TfL to implement changes to its pension scheme, but this could prompt industrial action.