From a classic grand grill to red-sauce Italian in Harlem, here are five places fit for big shots

If you worship money and status, New York is a city of churches, and many of the shrines take the form of restaurants. Anyone wishing to impress a client or close a deal in style is spoiled for choice, from Nobu to Per Se — assuming they have the pull to secure a good table without calling months in advance.

The hard bit in New York, then, is not finding a place to give the corporate expense account a vigorous workout. The challenge is having fun doing it. It is easy to drop $150 a head on food in the city and walk away feeling like a mere consumer, having paid for a visually impressive, multi-course display of culinary skill and hushed service that leaves you dreaming of a cheeseburger and a beer.

More frustrating is the sense that one could have had the same high-end experience in Paris, Hong Kong or London. It is good to be a globetrotter. It is bad to forget which city you’re dining in.

What follows, then, is a brief list of places that feature either genuinely amusing, satisfying food or a dose of New York flavour — all while maintaining that sense of exclusivity that the power diner requires.

A colleague of mine recently took a source to lunch at San Pietro. At the table to his left was the head of one of the biggest global private equity firms; at the table to his right was the chief executive of the biggest asset manager in the world. My friend was not taken aback in the least. For senior members of the New York financial establishment, San Pietro is, in effect, the company canteen.

It is refreshing, then, that the decor is not all smooth surfaces and muted modern tones. San Pietro’s frescoed walls hearken back to the tradition of New York Italian restaurants that partake of that combination of good taste and gaudy excess that’s characteristic of their mother nation.

The food is a throwback as well, made up mostly of classics from the Amalfi Coast region, such as risotto with lobster. But the owners, the Bruno brothers, make adjustments to meet the requirements of loyal customers — such as the investment-banking big shot who recently went gluten-free. Despite the top-dog clientele, the place feels pleasantly low-key.

Opinions vary about whether the food at The Grill is as good as what was to be had at The Four Seasons, its predecessor in the same space, when the latter restaurant was in its heyday a few decades ago.

Certainly, the food remains classic and lush (guinea hen with truffles and Madeira et al), and the prices remain high to the point of becoming a sort of performance art.

But the architecture adds an inimitable flavour of its own. Just walking into Mies van der Rohe’s Seagram Building makes one feel like a captain of industry. And there is a reason the Philip Johnson interior has been landmarked too. It is a stunning example of mid-century modernism.

A bit grandiose? Sure. But the shimmering chain-link blinds, the soaring wooden panelling and the satisfyingly symmetrical square bar with the bronze Richard Lippold sculpture floating above it — it all still casts a spell.

Does the people-watching hold up to the likes of San Pietro? Not any more. But it’s not the people you’ll want to look at.

If The Grill, with its soaring ceiling, sits at one end of the power-dining spectrum, Aretsky’s Patroon is at the other. In an unassuming brick building in Midtown, it feels intimate and welcoming. The crowd in the evenings is professional, grown-up and well-dressed, but people don’t come here to be seen. The private dining rooms are where the deals are cut.

The menu is mostly American classic, with a lot of meat on display. The prices are well into The Grill’s league (a $38 plate of saffron risotto, perhaps?) but you are paying mostly for gleaming wood floors, leather booths and the soothing smell of success, which pervades the place.

The rooftop bar is a popular after-work escape, but the pocket-sized bar at the back of the dining room is the real treat, if you can find a seat. Nominally sports-themed, it retains the feeling of a speakeasy. A glass of champagne and an oyster will leave you restored.

Any New Yorker working for an international firm will be familiar with the experience: when the bosses from Frankfurt or Tokyo roll into town, what they want to eat is a Big American Steak.

Where to break bread and seal deals, from FT Globetrotter, our new insider city guides for business travellers

Simon Kuper on where to eat like a president or politico

Top tables for dealmaking in the Japanese capital

There are a dozen places where you can find a perfect porterhouse or a rib-eye of Fred Flintstone scale. Sparks, Quality Meats, Wolfgang’s — they all have their charms. But they can also feel a bit square. Strip House (the Union Square rather than the Midtown location) brings both the first-rate beef and a downtown vibe. It was once the haunt of brokerage-house VPs celebrating their bonuses, but the macho crowd has moved on and left behind a steakhouse for adults.

In the red-velvet interior, with its wry nod to old-time burlesque, you can now eat your sirloin while being able to hear what your companions have to say — you could cut a deal here, rather than just celebrating one.

The service is friendly and professional without slipping into the overfamiliarity or brusqueness of steak joints.

The bone-in New York strip is particularly good, as are the side dishes, from the goose-fat potatoes to the roasted asparagus.

It sits on a humble corner in Harlem. The tiny dining room is sunk below street level and the ceilings are low. The food is old-fashioned red-sauce southern Italian, piled on vast platters. But this remains the hardest place in Manhattan to secure a table (if you don’t have a connection, you simply can’t) and one of the places you are most likely to see a big-shot city politician or a movie star.

Rao’s retains its allure, after 123 years in business — even though you can buy a jar of Rao’s tomato sauce in any grocery store — because of the way the proprietors, the Pellegrino family, and the crew of young bartenders and waiters (local kids mostly) radiate the sense that every night is a big night out, and that everyone is a part of the show.

The formula works. Is the menu memorable? The wine list up to date? No and no, but you are going to have a great time, and you might see a celebrity — and read about who they were on Page Six of the New York Post in the morning.

What are your go-to places in New York City for business dealings? Let us know in the comments or fill out this survey. The best tips will be published in FT Globetrotter.

Follow @FTGlobetrotter on Instagram for insider tips from our global network of correspondents to help you make the most of your work travel. Let us be your locals

Get alerts on Business travel when a new story is published

Explore the series
READ MORE
London: where to dine like a political player 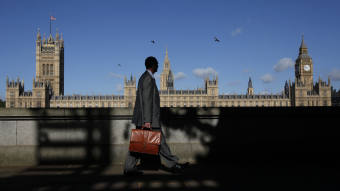 Where movers and shakers in business and politics break bread and seal deals in six global financial centres – from FT Globetrotter, our new insider city guides for business travellers