Legal & General to step up activism over climate change

Europe’s second-largest fund manager will vote against reappointing the chairmen of eight global companies, including Occidental Petroleum, Subaru and China Construction Bank, in protest at their slow progress in moving to a greener economy.

In a sign of how investors are worried about the impact of global warming on their returns, Legal & General Investment Management said its £5bn Future World fund range would also sell out of the companies over their response to climate change.

Across the rest of its funds, the UK-based asset manager said it would use its vote at annual meetings to signal its frustration with the chairmen of the eight companies, which include food retailer Loblaw Companies, utilities business Dominion Energy and financial and logistics company Japan Post.

The British fund manager is best known for its passive funds, which track an index, meaning it cannot easily decide to sell in and out of holdings.

“There has been a lot of conversations about climate change,” said Meryam Omi, head of sustainability and responsible investment strategy at LGIM. “But the speed and urgency hasn’t been in place and we wanted to inject that. We have a real chance to tackle this issue.”

“We wanted . . . an impactful way of changing company behaviour and making sure everyone steps up,” she said.

Investors are becoming concerned that measures to tackle global warming could leave some companies nursing large losses. A study led by academics from the University of Cambridge this month warned that by 2035 a decline in demand for fossil fuels could leave them falling sharply in value. It forecast that between $1tn and $4tn could be wiped off the global economy in fossil fuel assets alone.

In 2015, Mark Carney, the governor of the Bank of England, also warned that investors faced “potentially huge” losses from climate change action. The Pope warned major oil company heads on Saturday that there was “no time to lose” to address the “challenge of epochal proportions” in global warming.

Last year, LGIM wrote to more than 80 of the world’s largest companies across sectors it believed were most exposed to climate change, including energy and banks. 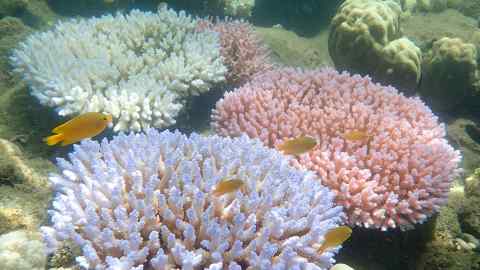 It said three-quarters of the companies contacted responded to its initial letters. But others failed to engage, including China Construction Bank and Rosneft Oil.

LGIM criticised Occidental for the US oil and gas group’s absence of plans to report total emissions, as well as its lack of ambitious carbon targets, while it said Japan Post and Loblaw had either zero or poor climate disclosure. It said Sysco Corp, the food retailer, lacked a climate change policy.

Occidental did not comment on LGIM’s decision, but it had “positive engagements” with its shareholders while developing its 2018 climate report. “We are continuing to progress our strategy and focus to be a global leader in CO2 emission reductions through geologic sequestration and believe our engagements are critical to our success.”

Sysco also gave no comment on the fund house’s decision but said it took its “responsibility as a good corporate citizen” seriously. “We have a long standing commitment to energy and waste management and sustainable agriculture practices, with continual enhancements to the programmes,” it said.