In the opinion of Wang Yao, one of China’s leading green finance experts and a scholar at Beijing’s Central University of Finance and Economics, the harmonisation of Chinese and global green bond standards is some way off.

Her pessimism comes despite last week’s decision by China’s central bank to halt financing for “clean coal” projects through green bonds — a landmark move that could help convince foreign investors to play a greater role in the country’s huge sustainable debt market.

“If you want to make different countries all have a totally unified set of standards then that would be very difficult,” Ms Wang told the FT in a recent interview.

Both she and the organisation she heads, the International Institute of Green Finance, often act as unofficial ambassadors to explain to international investors how and why China’s standards differ from those set by groups such as Climate Bonds Initiative (CBI), a UK-based markets watchdog.

“When you look into standards, the thing you actually need to understand is the country’s goals in setting up the system,” she says.

For China, she says, the goal is making dirty projects cleaner. This means including “clean coal” — technologies such as coal washing and carbon capture that improve fossil fuel efficiency — as a candidate for green finance due to China’s overwhelming reliance on coal as a power source.

There are also multiple ministries and departments involved in setting up such a system, each with their own overlapping but distinct priorities. Some focus more on tackling climate change while others aim to reduce air pollution or save energy.

“There is actually a lot of discussion and debate in China about what to classify as green,” she says. “There is a lot of bargaining.”

There is actually a lot of discussion and debate in China about what to classify as green. There is a lot of bargaining

While horse-trading over what counts as green is making gradual progress, the overall volume of green bonds issued in the country has jumped since 2015, when the People’s Bank of China became the first central bank to release guidelines for green bond issuance.

A further $24.2bn in green bonds issued in China last year did not meet global standards, either because they funded fossil fuel projects or because they did not meet CBI’s threshold requiring that 95 per cent of proceeds go towards green assets.

This has irked international investors, who are keen to buy into China’s growing green bond market but balk at debt that is nonaligned with international standards.

Ms Wang and other members of a task force of experts assigned with establishing China’s green finance system are pushing to unify standards among different stakeholders within China — a goal that she believes should be completed this year.

The lack of alignment with global standards becomes especially complicated when Chinese companies invest overseas. China’s top-down approach gives the regulator a lot of power within China, but it makes it harder for its standards to be adopted globally, Ms Wang says.

As Chinese companies are encouraged to build infrastructure across Eurasia under the Belt and Road Initiative to develop trade routes between China and the region, they will face a choice between using Chinese and international standards for funding.

Ms Wang gives the example of high-speed passenger rail, which is not considered green in China but is often eligible for sustainable financing elsewhere. “If in China it is not defined as green, but according to international standards it is green, then is it ultimately green or not?” she asks.

Ultimately, Ms Wang believes the key to ironing out these issues is greater transparency. To this end, her organisation has built a database for China’s listed companies’ environmental, social and governance risks.

Once pending rules mandating disclosure for all companies are adopted, this will start to educate investors and companies in China as to what counts as an environmentally sustainable project, she hopes.

“Publicly listed companies think: no one has required me to do it, so why would I do it? They have yet to realise that environmental information is important for investors,” she says.

Despite the dire economic impact of Covid-19, Ms Wang does not believe the government will pull back on environmental targets. Better understanding the risks brought about by climate change and pollution is only going to become more important for companies in China, she says: “Policies on climate change and on environmental protection are only going to get ever more strict, which is in reality a financial risk for companies.” 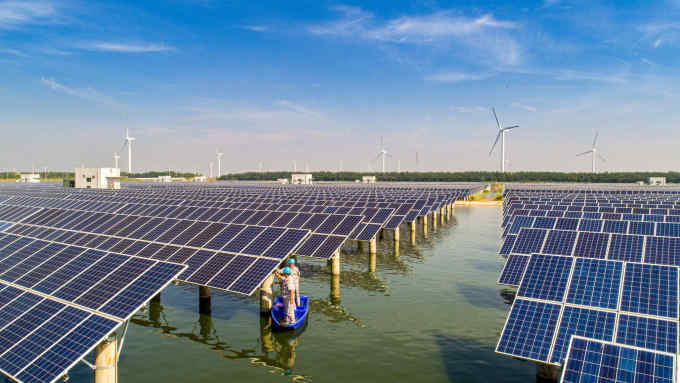