Boris Johnson is planning to open the spending taps if he becomes prime minister, with Sajid Javid emerging as his favoured choice to become chancellor and oversee the expansionary new policy.

Mr Javid, home secretary, has outlined plans to create a £100bn infrastructure fund over the next five years and has previously called for £50bn of extra borrowing to pay for a massive housebuilding programme.

According to close supporters of Mr Johnson, Mr Javid would be the most likely person to move into 11 Downing Street if the frontrunner in the Tory leadership contest becomes prime minister next month.

“It will be Saj,” said one minister backing Mr Johnson. “He has the gravitas, he’s respected in the City, he’s worked at the Treasury before.” Another person close to the Johnson camp said “Boris really is planning to turn on the spending taps”.

Despite a turbulent few days Mr Johnson remains the favourite to defeat foreign secretary Jeremy Hunt in a contest which will be settled by about 160,000 Tory members. 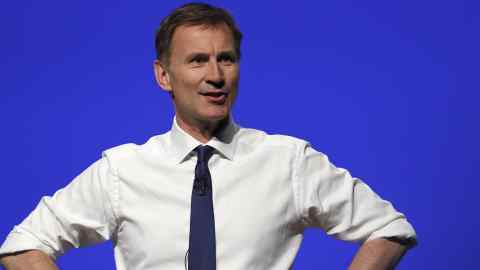 Although many of Mr Johnson’s supporters believe that Mr Javid would be offered the Treasury, he will face competition from Liz Truss, Treasury chief secretary and Matt Hancock, health secretary. The campaign stressed it is still early days. “No jobs have been offered,” Mr Johnson’s spokesman said.

Mr Javid, a former high-flying banker who gave up a £3m annual salary to become an MP in 2010, was a Treasury minister under George Osborne and was a protégé of the former chancellor.

As communities secretary Mr Javid called for a £50bn investment programme in housing, to the annoyance of current chancellor Philip Hammond, who has tried to bear down on public borrowing.

This month Mr Hammond tried to impose some fiscal discipline on the Tory leadership contest by asking all candidates to sign a pledge to keep Britain’s debt falling as a share of national income; neither Mr Johnson nor Mr Hunt has signed the pledge.

Mr Johnson’s aides said the candidate would “not have his hands tied by an outgoing administration” but it is clear the former foreign secretary would take a much looser fiscal approach than Mr Hammond.

Asked on Talk Radio what would be his first act as prime minister, Mr Johnson said he would boost spending on education, transport infrastructure, regional programmes, roadbuilding, policing and Brexit preparations.

He also promised in his Daily Telegraph column to raise the 40p income tax threshold for higher earners from £50,000 to £80,000 and has also suggested helping lower earners by raising the threshold for national insurance contributions. The tax cuts were costed at £20bn by the Institute for Fiscal Studies.

“I’m the last person to want to curtail the leadership race,” tweeted David Gauke, justice secretary and a former Treasury chief secretary. “But every Telegraph column by Boris Johnson increases borrowing by £billions.”

According to calculations by the Institute for Fiscal Studies published this week, Mr Johnson’s tax cut proposals would cost the exchequer as much as £20bn a year while mainly benefiting richer households.

Although no jobs have been formally offered to anyone, Ms Truss is seen by supporters of the Johnson campaign more likely to head up the business department, while Mr Hancock is likely to stay at the health department.

Mr Javid has yet to formally endorse Mr Johnson but MPs who supported his unsuccessful campaign to become leader believe he will rally behind the frontrunner.

Mr Johnson’s spokesman said he “takes fiscal responsibility very seriously and has consistently voted for it in parliament”. The Johnson campaign argued that Mr Hunt’s £15bn pledge suggested that the rival contender also wanted to loosen the pursestrings.