Singapore takes health seriously and decided two decades ago employers should too. In 1999, it introduced the Singapore HEALTH (Helping Employees Achieve Life-Time Health) awards to recognise organisations that showed a strong commitment to promoting workplace health.

Despite these efforts, Singapore’s ministry of health knew it would have to step up its drive to improve the country’s health, so in 2016 it declared war on diabetes. In outlining his plan at the time, health minister Gan Kim Yong said the disease was costing the country S$1bn ($730m) a year. Worse still, of the 400,000 residents of the city state estimated to have the disease, one in three were unaware they did.

It was against this backdrop that the Health Promotion Board revamped the biennial health awards in 2017. Its renewed focus on workplace participation came as it presented findings from its own research that showed young adults in Singapore between the ages of 21 and 39 gained weight faster than any other age group as they transitioned into working life. Their jobs were typically quite sedentary and they were adopting potentially unhealthy diets.

“With obesity being a contributing factor to a range of health problems, including diabetes, it is increasingly important to bring health into workplaces,” says Simon Lim, director of the workplace health and outreach division at the Health Promotion Board, which also works with Singapore’s landlords and developers to build structures conducive to healthy lifestyles.

What companies do to promote healthier workforces is down to them, but the HEALTH awards judges reward ingenuity. ComfortDelGro Taxi, one of the city state’s taxi companies and a 2017 award winner, encouraged staff to compete against one another on a Pokémon GO “Hunt Walk” to encourage them to get out of the office and walk. The company also provided free access to gymnasiums and swimming pools once a week to taxi drivers and health screenings carried out at checkpoints conveniently located in or near taxi-servicing workshops. 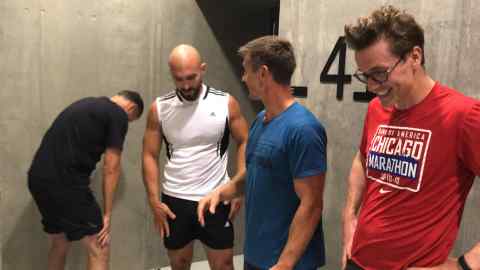 Pharmaceuticals group GlaxoSmithKline, another one of the 2017 winners, adopted a more medical approach. It broadened medical benefit schemes to cover healthcare for employees’ families and introduced a programme aimed at managing workers’ chronic diseases. Offering medical care on site helps staff manage these conditions, which in turn reduces the risk of heart attacks or strokes, says Ashish Vijay Jain, head of employee health and wellbeing for Asia at GSK.

But for all of Singapore’s efforts to promote health at work, employers still have to fight laziness. “It is hard to encourage a person who is used to a sedentary lifestyle to become active and take up healthy activities, or change his or her dietary habits,” says Lim.

Convincing business owners of the benefits of investing in healthy workplaces can be just as tricky given returns are only visible in the longer term in the form of more productive staff. “Most business owners are held to [short-term] profit objectives and may not have the latitude to explore health and wellness as a strategy for enhancing shareholder value,” says Lim.

But GSK has estimated that every dollar spent on its chronic disease management programme produces a positive return on investment, says Lim, taking into account the savings derived from reduced absenteeism, improved productivity and reduced hospitalisation and medical interventions. “This shows that it literally pays to invest in the health of our employees,” he says.